Football League Betting: Huddersfield the most profitable team in the EFL to bet on this season 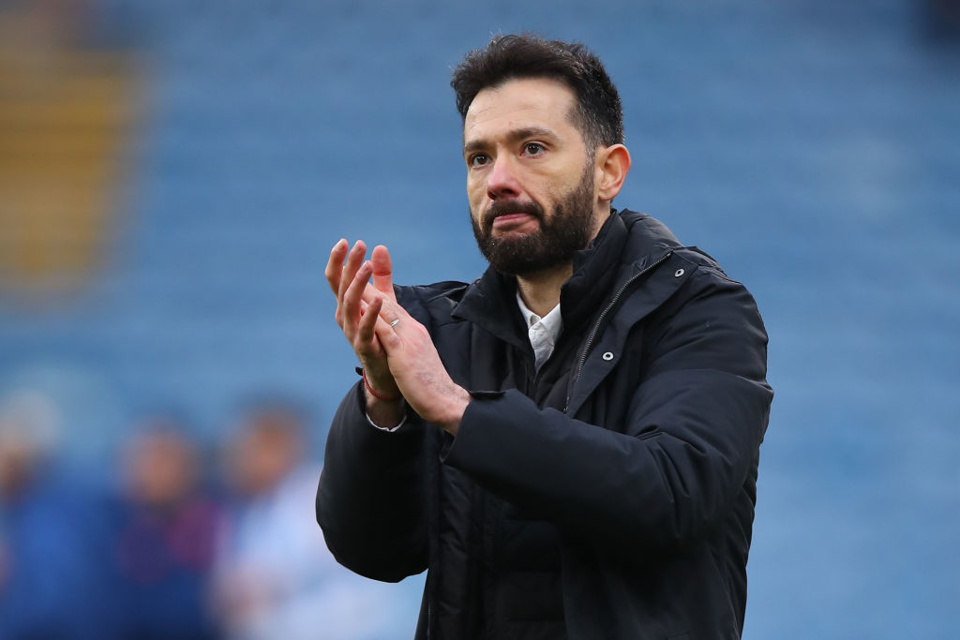 As the football season draws to a close, here at BettingOdds.com we’ve decided to take a look at which teams in England have been the most profitable to bet on. We released our findings on the Premier League earlier in the week, now the Football League comes under the microscope. Below you can find out how much you would be in profit (or a loss) if you had placed £10 on that team to win each league game this season.

There is still the small matter of the Championship play-off final on Sunday between Huddersfield Town and Nottingham Forest to decide who will be playing top-flight next season. It’s been a magnificent season for Huddersfield who have exceeded expectations under the guidance of Carlos Corberan.

A large reason behind Huddersfield’s healthy profit total is due to their form on the road this season. Only two sides, Bournemouth and Fulham, have won more away matches in the Championship this season than Town, who amassed 37 points on their travels.

Huddersfield’s biggest priced win this season came against table-toppers Fulham in the capital back in February. Goals from Danny Ward and Duane Holmes gave Town a 2-1 win at Craven Cottage, with the visitors priced at a huge 17/2 to take all three points before kick-off. The West-Yorkshire club also recorded wins against other top-six finishers: at Sheffield United priced at 4/1 and Nottingham Forest at 11/4. Other notable big price wins came against Middlesbrough 4/1, and at home to West Brom at 3/1. 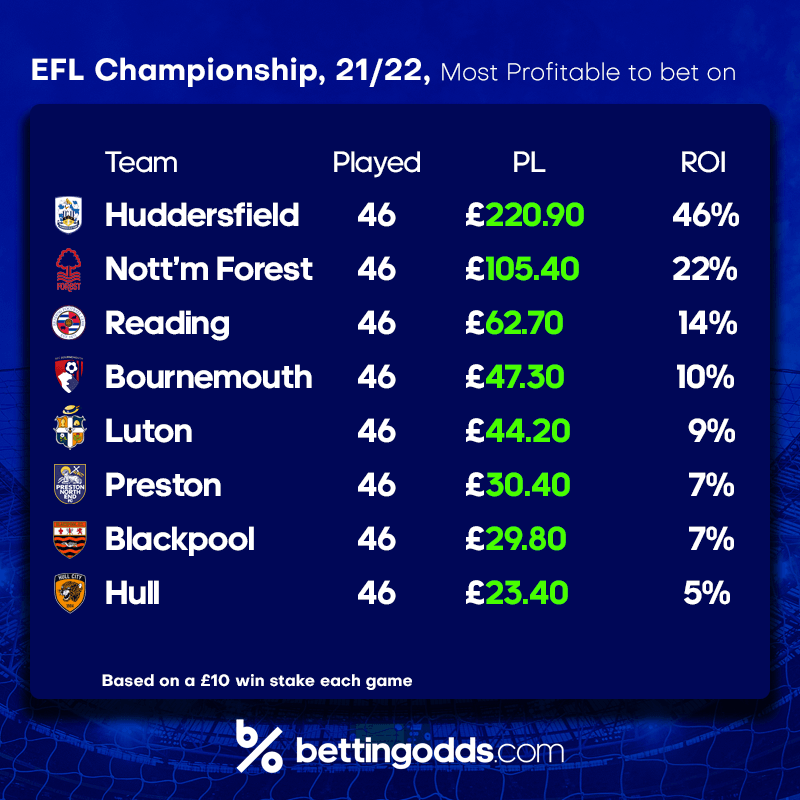 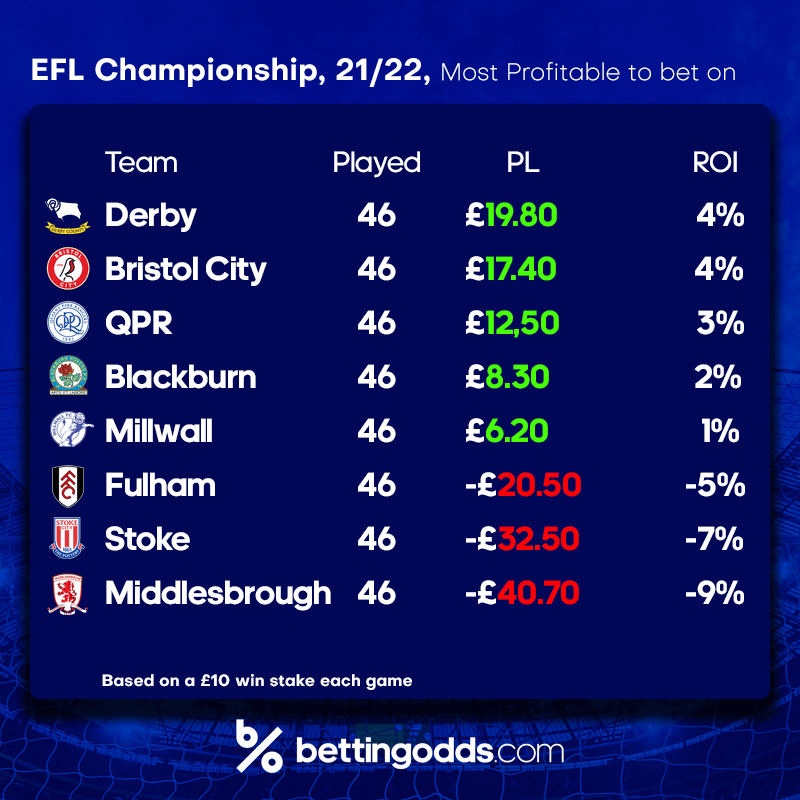 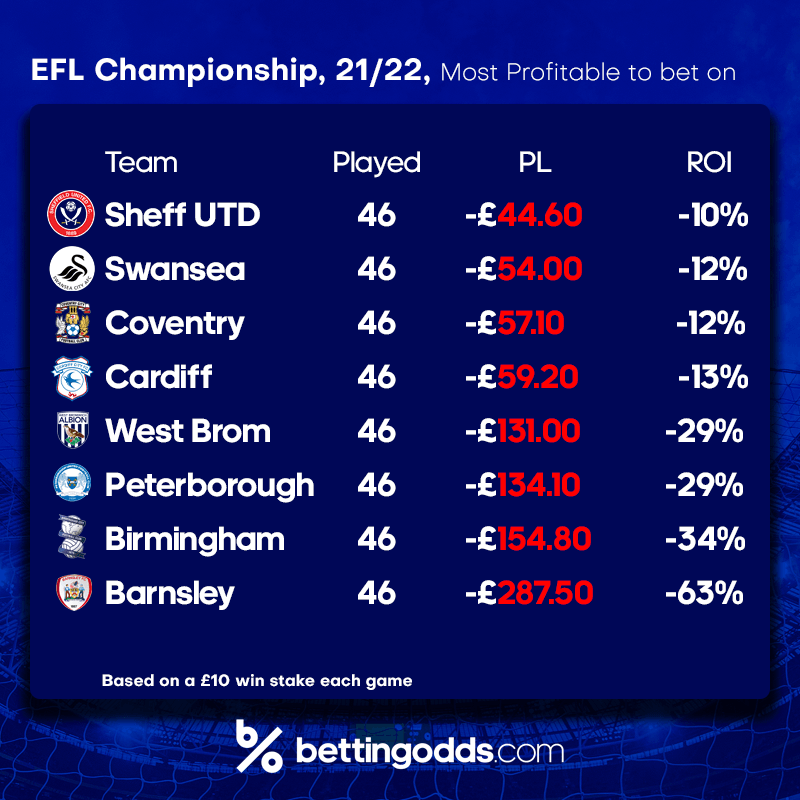 MK Dons missed out on promotion to the Championship after they were beaten 2-1 over two legs against Wycombe in the play-off semi-finals. Liam Manning’s men put together a 15 game unbeaten streak in the second half of the campaign, winning 11 of those which was one of the main factors behind the Buckinghamshire club being the most profitable to bet on in League one.

After finishing the campaign on 89 points, MK can also count themselves a little unlucky not to go up via the automatic promotion places, missing out to Rotherham by just one point. The Millers were in fact the side who MK’s biggest priced win came against this term: 3/1 pre-match before coming out 2-1 winners at the New York stadium despite having 10 men for three quarters of the match.

Away wins are often a large reason behind teams ranking highly in the profitability standings and looking back at MK Dons’ results on the road this term, they have beaten four of the five other sides who finished in the top-six. Wins at Wigan (5/2), Sunderland (5/2), Wycombe (9/5) and Portsmouth at (23/10), have all helped contribute to a profit of £145.10 this season. 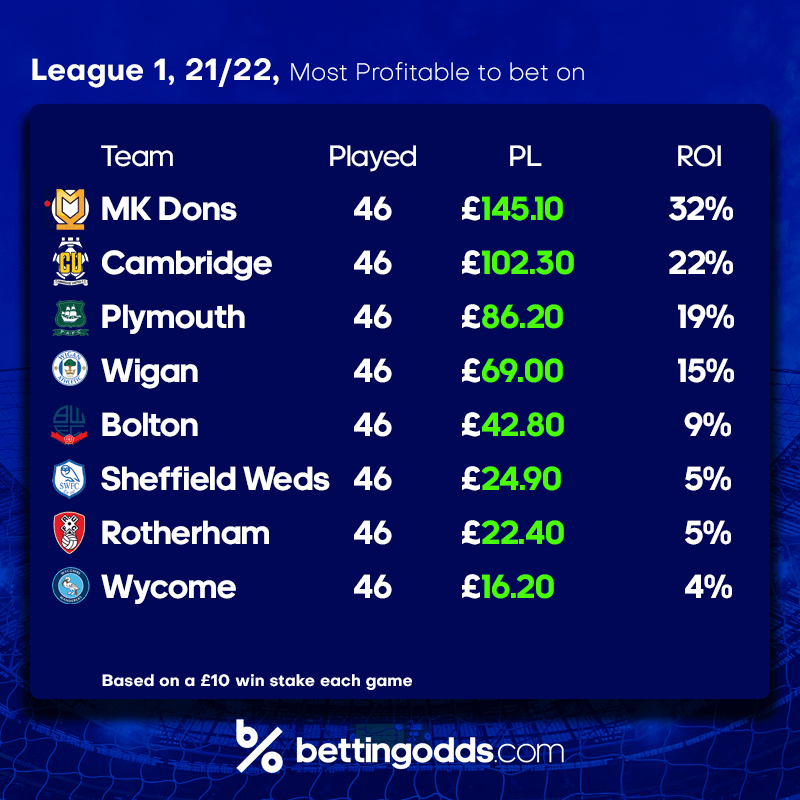 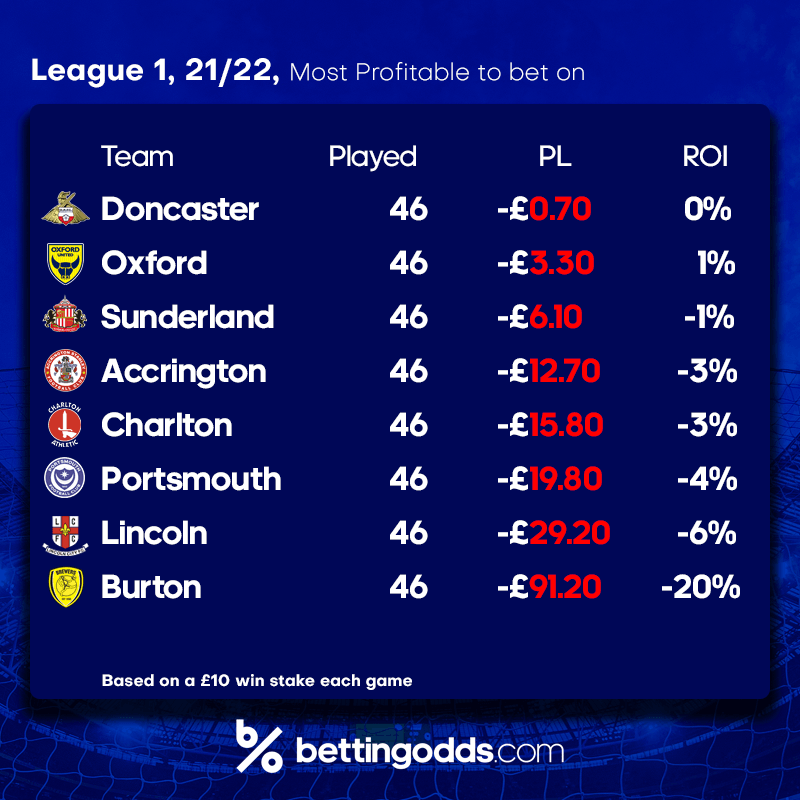 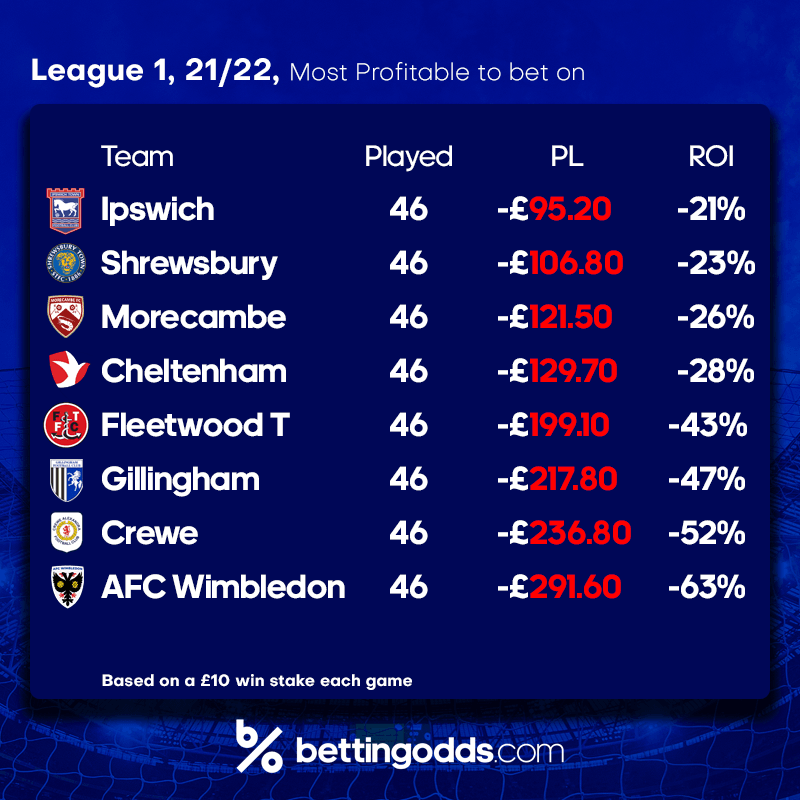 Moving down into England’s fourth tier and Crawley are the team who have generated the most profit this season for punters who had bet on them every game. The Reds are currently looking for a new manager after parting ways with John Yems amid racism allegations just a few weeks ago. David Artell is the current favourite to take over the role and if he does so, he will inherit a squad that finished 12th in the table last season with 61 points.

Crawley won 17 of their 46 matches and had the joint-lowest number of draws in the division with 10. Under John Yems, Crawley upset the odds on several occasions throughout the campaign with their biggest priced victories coming away at Leyton Orient (5/1), Northampton (9/2), Rochdale (9/2), and Newport (10/3). Crawley also did the double over Bradford with wins at 15/4 and 23/10, as well as defeating champions Forest Green on home soil (3/1). 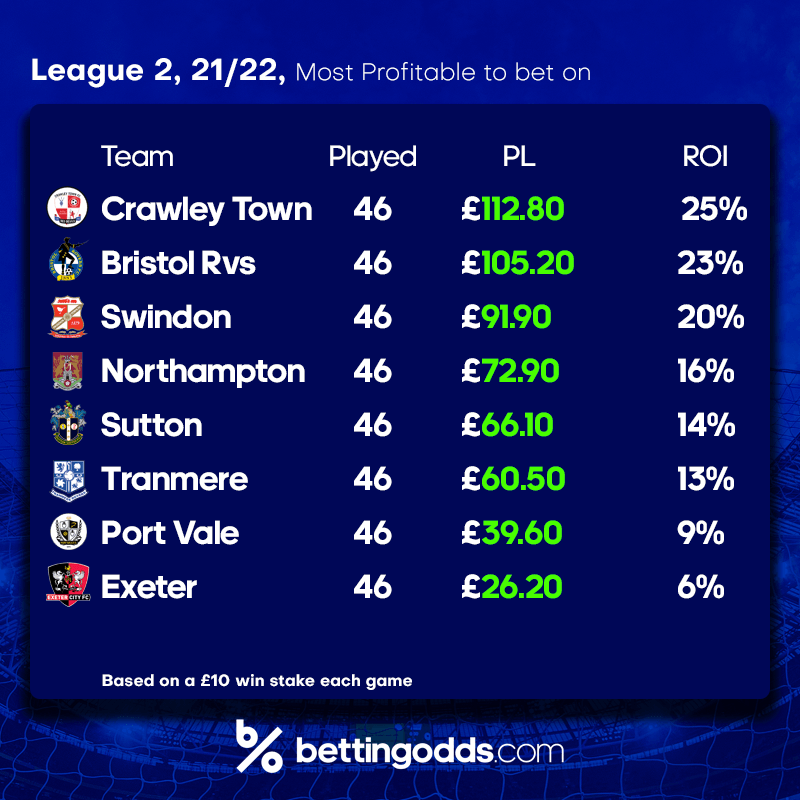 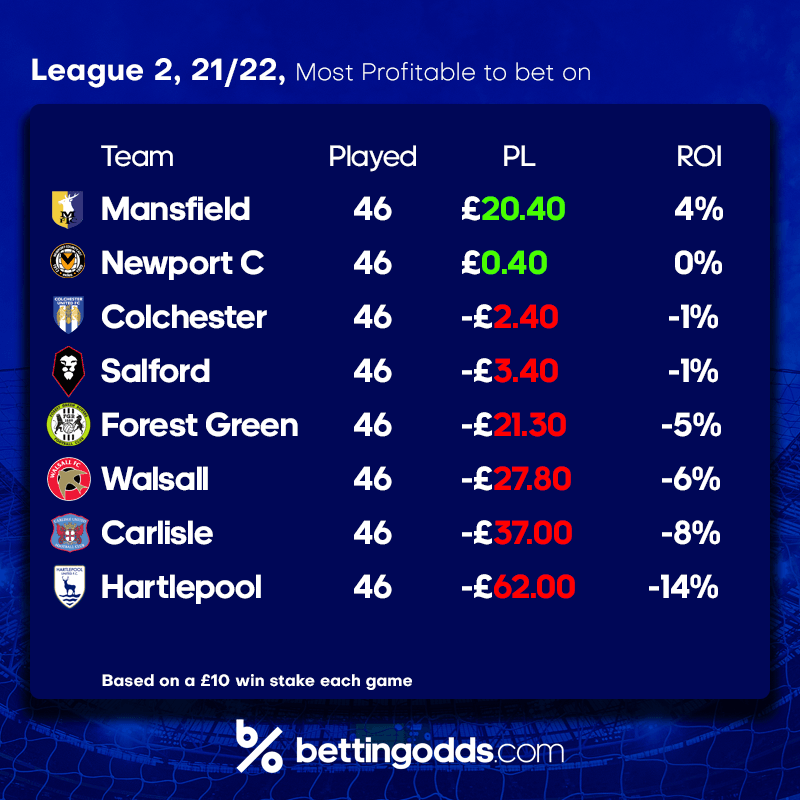 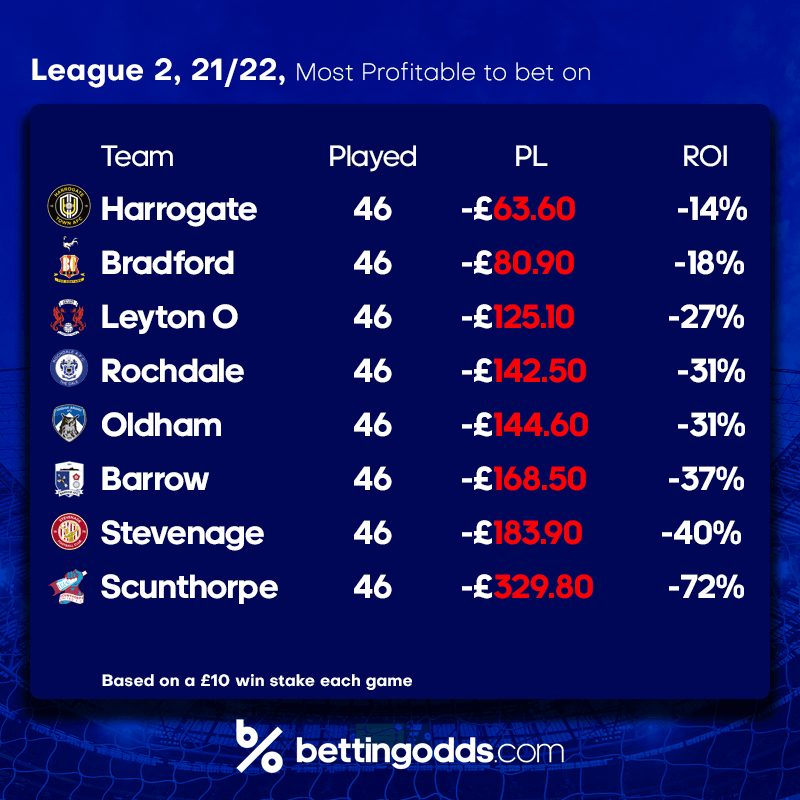