Morecambe v Newport Tips: Side with the Exiles at Wembley 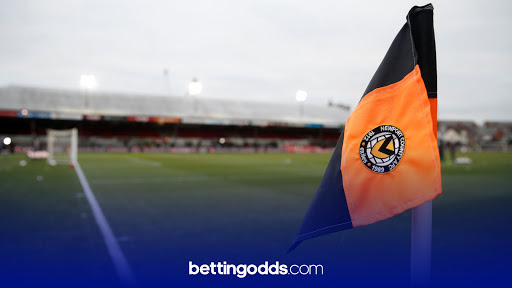 The final game of the Football League season kicks off on Bank Holiday Monday at 3pm with Morecambe and Newport going head to head at Wembley.

The pair finished the season 4th and 5th respectively although Morecambe had five points more. Both sides came through tough semi finals and the betting is pretty even on who will gain promotion to League One.

Morecambe are 19/10 chances which means they have a implied probabilty of 34% to win the match, whilst Newport shade the betting with the bookmakers at 8/5 (38%). The draw is 11/5 and we're yet to see one of the play-off finals go to extra time this weekend.

Kelvin Mellor is available for Morecambe following suspension but may find it hard to get back into the team whilst Liam McAlinden should keep his place having played a part in both of Morecambe's goals against Tranmere in the semis.

With all three of Newport's goals in the win over Forest Green coming from substitutes it may be a little harder to predict the Newport line up. There's a lot of attention being given to Kevin Ellison after the former Shrimp rather publicly rubbed his ex-manager Derek Adams' nose in it winning scoring against his old club in the regular season. I'd like to play Ellison in both the shots and to be carded markets where he is a 4/1 chance with Bet365 but there's a good chance he'll start on the bench.

Despite Morecambe winning five of their last six of their last eight matches, I like the look of Newport to be promoted to league Two, with Bet365 going best price 4/5 about Michael Flynn's side to lift the trophy.

Newport beat Morecambe in both of this seasons matches and they have just one defeat, to Champions Cambridge City in their last eleven games.

Flynn has also been able to get a reputation for Newport being a cup specialist in recent seasons. This term the Exiles got to the fourth round of the Carabao Cup beating Swansea, Cambridge and Watford before being just three minutes away from knocking out Newcastle before losing on penalties. The FA Cup was a similar story reaching the third round before drawing 1-1 with Brighton and losing on penalties.

The team showed their steal again in the week coming through past Forest Green and I just feel like they have the experience to lift the trophy at Wembley.

If you're siding with Morecambe for Monday's match I like the look of the price boost with Betfair for Carlos Mendes Gomes to score from 5/2 to 3/1.

The 22yo Spaniard has netted 15 goals for the Shrimps this season (9th best in the league) from 45 appearances and with five games without a goal he'll be pumped to get on the scoresheet at Wembley.

Whereas Newport spread around their goals, CMG's 15 equate to over 20% of Morecambe's goals this season and he will be the focus of their attacks.

For my longshot I've gone back to Bet365 and looked specifically at the players to be carded market in their Bet Builder product.

Two players stand out as serial offenders for their respective teams when it comes to bookings.

Morecambe were the second most aggressive side in League Two this season amassing 77 yellows and six reds, the most in the league. Of those 77 yellows Yan Songo'o and Sam Lavelle have picked up 20, plus a red card each. Songo'o is a 2/1 chance to be carded whilst Lavelle is 13/5. Howeveer, Songo's 10 yellows and a red have come in 10 games fewer than his teammate and he gets the not here.

For Newport Joss Labadie also has 10 yellows and a red, from 35 starts this season. Labadie is averaging three fouls per game and looks primed for a booking in what will be the most competitive match of the season. Also a 2/1 chance I'm adding him to the Bet Builder.

Finally there's a couple of match bets I like to bump up the price. Both teams to score occured in three out of four of the semi-finals and both of the matches when these two sides met in the regular season. Both sides have been involved in games where both teams have scored more than they haven't this season and if we add this bet to the aforementioned Carlos Mendes Gomes to have over 1.5 shots the bet pays 33/1 with Betfair.