Manchester City v Liverpool Tips: 100% Trent, follow the right-back from outside the box 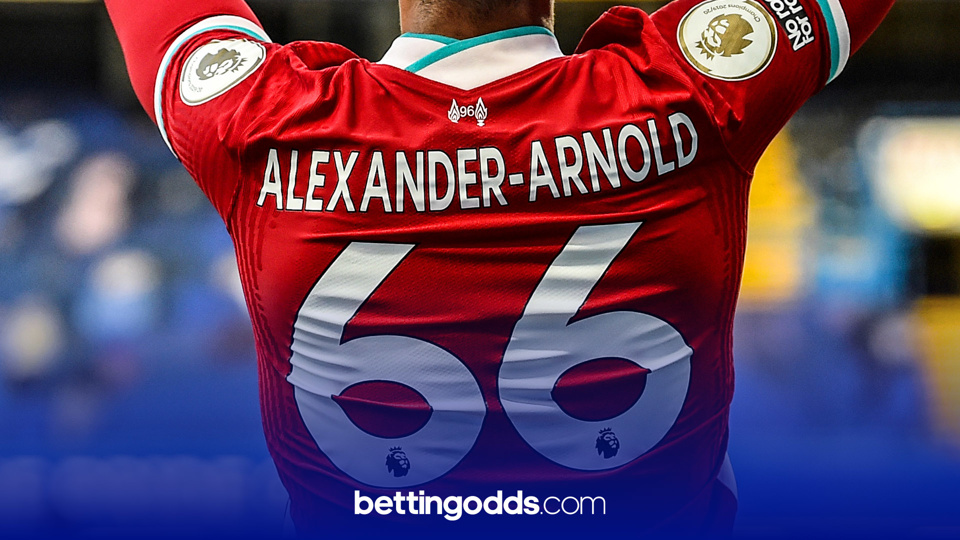 Trent Alexander Arnold has taken 11 shots this season all coming from outside the box and he features in our 16/5 play for the game
By Anthony Eadson
16:20 Friday 6th November 2020 - 5 minute read

It’s Manchester City v Liverpool on Sunday in what is fast becoming one of the best rivalries in Premier League history  It’s a huge game for both sides with both Jurgen Klopp and Pep Guardiola knowing how much a win here could swing the pendulum in their favour for the coming months. The game kicks off at 16:30 and can be seen live on Sky Sports Main Event. Our man @AnthonyEadson is on hand with three football tips for the game that look good value.

Gabriel Jesus came off the bench midweek for Manchester City and looks the most likely to start in attack. Aymeric Laporte and Ruben Dias were rested against Olympiacos and should return to the starting line up on Sunday.

Liverpool's injury woes continue with Thiago not fully fit which could see a tweak in formation that allows all of Mo Salah, Sadio Mane, Diogo Jota and Roberto Firmino to start. Joel Matip is expected to be fit to partner Joe Gomez at the heart of the Reds defence.

Manchester City are the bookmakers favourites to win the game, priced at 19/20 with most firms. The draw is available to be backed at 3/1 with a priceless win for Jurgen Klopp’s side, priced at a rather large looking 23/10

Manchester City v Liverpool
Trent Alexander-Arnold 1+ shot on target from outside the box
16/5
All 11 of Trent's shots this season have come from outside the box This selection has landed in two of his last three league games High tempo and plenty of fouls on the menu could create some free-kick opportunities for Trent to test the keeper
Odds correct as of 2020-11-06 13:00 Odds subject to change.

The first of three selections I’ve picked out for Sunday’s grudge match is Liverpool’s right-back, Trent Alexander-Arnold, to have one or more shots on target from outside the box, priced at 16/5 (4.2). The 22-year-old has managed 11 shots in total this season in the Premier League and 100% of those have come from outside the area.

Trent’s free-kick-taking is right up there with the best of any in this division and with Sunday’s game set to be a feisty affair I think we could see a few opportunities for the full-back to test Ederson from range.

Having a look at some prices with Betfair and Paddy Power, and to have a standard shot on target Trent is priced at 2/1. I’ve therefore opted for the much bigger price of 16/5 for him to have a shot on target from outside the box, which makes sense when all of his shots have come from outside the penalty area and with both Rodri and potentially Ilkay Gundogan starting for City, I think there could be a good few fouls conceded leading to free-kicks.

Liverpool to win & BTTS
4/1
Liverpool have won 34 of their last 38 league games Liverpool warmed up with a 5-0 win over Atalanta this week City have conceded five at home to Leicester and have failed to beat Leeds and West Ham this seasojn
Odds correct as of 2020-11-06 13:05 Odds subject to change.

Next up I’m fancying Liverpool to win the game and both teams to score. Betfred, William Hill both have this selection priced at 4/1 at the time of writing, a price that should also be readily available on the Betfair Exchange. I do feel the market has overreacted to the loss of Liverpool’s Virgil Van Dijk a little bit and I don’t think Manchester City should be priced at odds-on to win this fixture. Pep’s side have conceded five at home to Leicester and have failed to win league games against Leeds and West Ham at the start of this campaign.

Yes the Cityzens have now kept three clean sheets on the bounce but we know how much Pep fears Liverpool like no other side he has come across in England. Klopp’s team had the perfect preparation for the game with a 5-0 demolition job against Atalanta midweek, with Diogo Jota securing a hat-trick. Liverpool’s attacking force is starting to come alive this season and with both teams to score priced as short as 4/11 with some bookmakers, Liverpool to win and both teams to score looks a solid play for Sunday.

Liverpool have won a staggering 34 of their last 38 league games and even though they may not be at full strength I think the sheer potentness of their attack could swing this game in favour of the visitors. 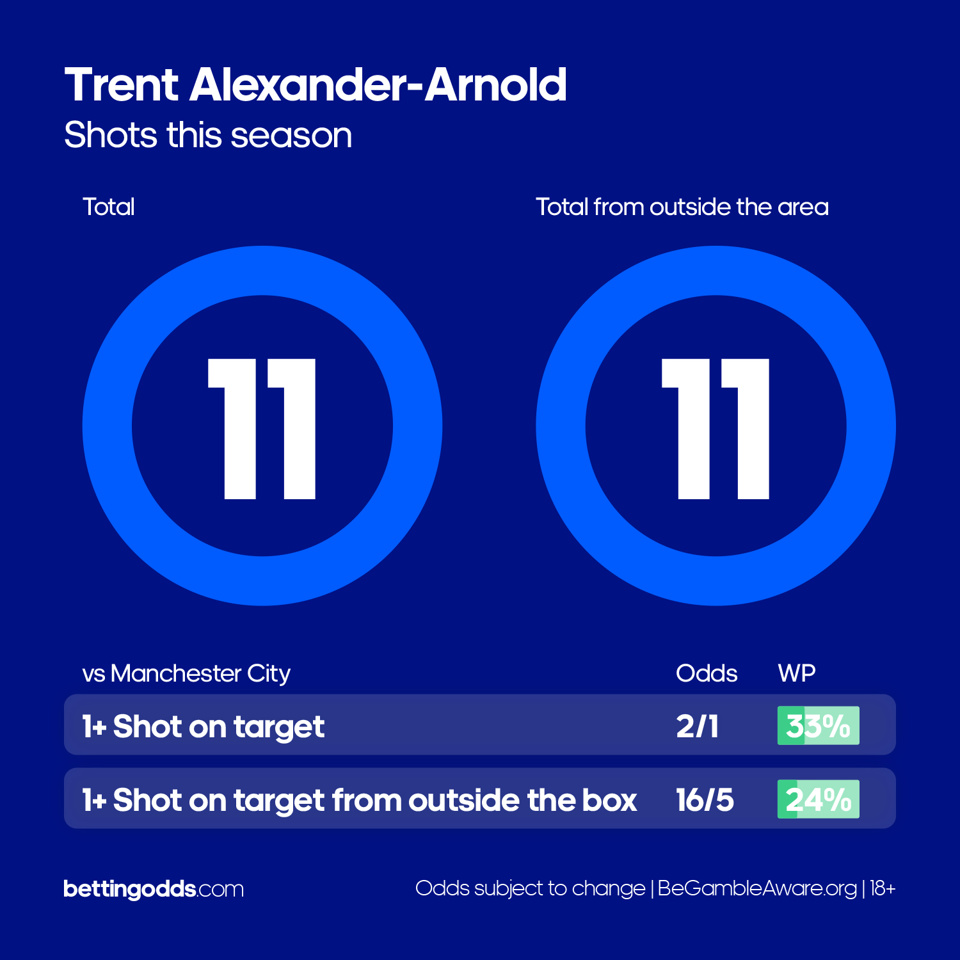 100% of Trent Alexander-Arnold's shots have come from outside the box this season
Premier League Betting
Sterling & Mane 1+ shot on target, Rodri & Alexander-Arnold to be carded
33/1
Sterling scored 20 league goals last season averaging 1.2 shots on target per game Sadio Mane has four league goals this term and is averaging 1.7 shots on target per game Rodri has been booked in eight of his 15 games against 'top-six' sides Trent was booked on six occasions last season
Odds correct as of 2020-11-06 13:05 Odds subject to change.

I’ve also picked out a longshot for the game priced at 33/1. I’ve gone for Sadio Mane and Raheem Sterling to have one or more shots on target, with both Rodri and Trent Alexander-Arnold to be carded, available with Paddy Power.

Sadio Mane has looked as lively as ever this season. The Senegal International has scored four league goals and is averaging an impressive 1.7 shots on target per game. Liverpool have often focused their attacks against Manchester City via longballs over the top to Sadio Mane, which could be deployed once again this weekend.

Raheem Sterling has been a little quiet for his high standards at the start of this campaign but I’m fancying the 25-year-old to have one or more on target on Sunday. He scored 20 league goals in 2019/20 and averaged 1.2 shots on target per game over the course of the season.

Every time Rodri goes out onto the pitch at the moment he looks as though he's a loose decision away from picking up a booking. The tough tackling midfielder has been booked in eight of his 15 games for City against ‘top-six’ sides which is a strong indicator going into this one.

The final element of this Same Game Multi is Trent Alexander-Arnold to be carded. I do think Trent can show a bit of bastardry at times and think this clash looks primed for it with the bad blood between the two in the past. Booked on six occasions in 2019/20, he’s a player who knows what is on the line in this game and I fancy him to pick up his second of this campaign at the Etihad.

Putting those four together pays 33/1 with Paddy Power. Best of luck to those following the selections. Enjoy the game and please gamble responsibly.

One of the all-time #PL matches 😍