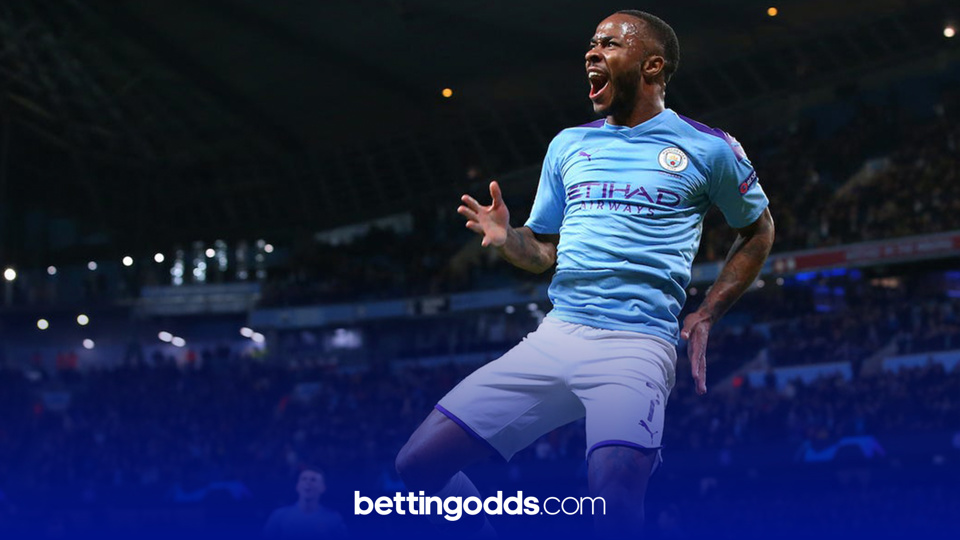 No player has been booked more times in the last ten games between Liverpool and Manchester City than Raheem Sterling
By Anthony Eadson
10:54 Sunday 7th February 2021 - 4 minute read

It may only be the first week of February but Paddy Power have already paid out on Manchester City to be the Premier League Champions this season. Pep Guardiola’s side travel to Anfield on Sunday with City not having won there since all the way back in 2003. The rivalry between these two has grown over the last few years and we’ve got three attractive looking football tips for Sunday’s big game which kicks off at 4:30pm live on Sky Sports.

You have to go back over 20 years for the last time that Liverpool failed to score in three consecutive home league games and The Reds are currently priced at 12/5 to collect the three points. That’s the biggest price Klopp’s side have been at Anfield since January 2018, with the draw being offered at 14/5 and a win for City priced at 23/20.

Pep Guardiola may go with a back-three of John Stones, Ruben Dias and Aymeric Laporte which could potentially nullify Liverpool’s key threats out wide. Sergio Aguero, Kevin De Bruyne and Nathan Ake are all confirmed absentees for the visitors.

New signing Ozan Kabak could make his debut for Liverpool after getting International clearance. That would see Jordan Henderson slot back into midfield, although with several players doubtful for the game such as Alisson, Sadio Mane and Fabinho it looks particularly tricky to predict Klopp’s line-up.

With Pep Guardiola having never won at Anfield and the mentality monsters being on the rocks in their bid for back-to-back Premier League titles, I’m fancying the visitors to go in for the kill on Sunday and take the game to Liverpool. I’m expecting Bernardo Silva to start for the Cityzens and he looks a generous price for a shot on target at 13/8 with both Betfair and Paddy Power.

Over his last seven appearances in competitions the 27-year-old has registered seven shots on target including four in his last four in the Premier League. I’m predicting Silva to start as part of a front-three on Sunday which would give plenty of appeal to the 13/8 offering with others such as Coral going much shorter at 23/20.

For my second selection on Sunday I’ve taken a dive into the ‘to be carded’ market, where I’m leaning towards Raheem Sterling to pick up one off referee Michael Oliver, who has dished out 16 yellows in his last four games.

Over the last ten meetings between these two sides, no player has found their way into the book more times than Raheem Sterling with three. A game that means more to him than most involved due to his history, Sterling always seems to be fired up against Liverpool. I correctly recommended the England International to pick up a booking in the return fixture at 11/2 and I’m going in again, this time at the even bigger price of 15/2 with bet365. That’s by far the best price currently available at the moment with Betfair going 12/5 and William Hill 3/1.

I really do think that’s a superb price on Raheem Sterling to be carded at 15/2 and for my longshot for the game I’ve doubled him up with Liverpool’s Thiago Alcantara also to find his way into the book.

Despite having shown some impressive play in the middle of the park I feel Thiago’s style of play is failing to improve Liverpool at the moment. In all six of his most recent starts for Liverpool Thiago has committed at least three fouls and has been booked twice in seven starts in the league. At Bayern last season, the Spaniard picked up seven yellow cards in just 24 Bundesliga appearances and is certainly not one to be frightened of breaking up play with a cynical foul.