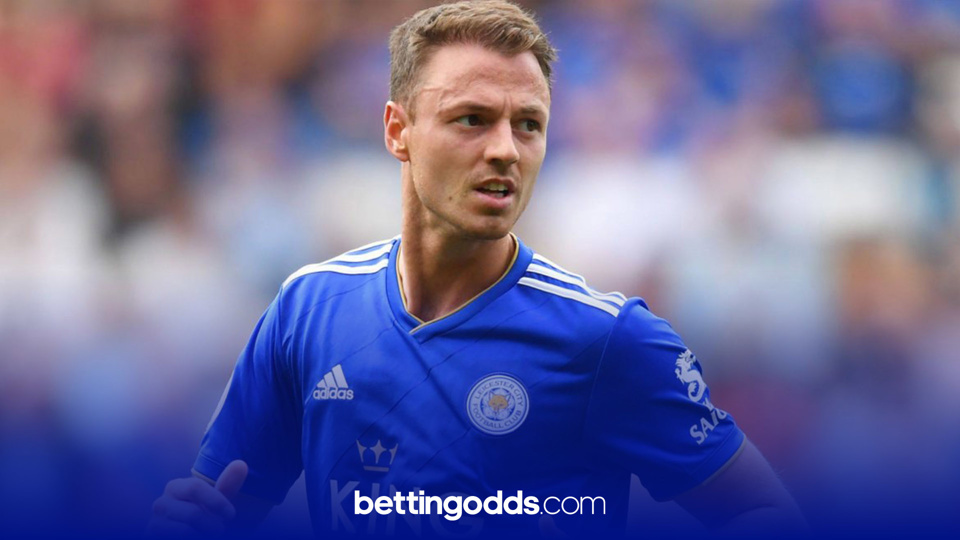 Leicester's Jonny Evans has been booked four times in five league games this season and features in our 18/5 selection for the game
By Anthony Eadson
17:09 Friday 20th November 2020 - 4 minute read

April 2017 was the last time Liverpool were beaten at home in the Premier League and the reigning Champions will look to extend that record on Sunday as they take on Leicester at Anfield. Our man @AnthonyEadson has previewed the game and has three football tips to accompany.

Things went from bad to worse on the injury front for Liverpool over the International break with Joe Gomez and Trent Alexander-Arnold the latest additions to the treatment table. Nathaniel Phillips should line up at centre-back with Joel Matip, whilst there could be returns to the starting eleven for James Milner and Fabinho if passed fit. Mohammed Salah will miss the game after testing positive for Covid-19.

Wesley Fofana withdrew from the France under-21 squad with a knee issue over the break and Leicester will be desperate to have him back. James Maddison looks to be back at full fitness and should start however there are still doubts surrounding Wilfried Ndidi, Timothy Castagne and Ricardo Pereira.

Liverpool are unsurprisingly the bookmakers favourites to win the game, with Jurgen Klopp’s side being given a 51% implied chance of victory with odds of 19/20. The draw can be backed at 3/1 with a win for the Foxes priced at 14/5.

Liverpool v Leicester
James Maddison 1+ shot on target
6/4
Looking back to his best after the long road back from injury This selection has landed in four of Maddison's six starts this season in all competitions Free-kick taker As short as 4/6 with Coral
Odds correct as of 2020-11-20 16:40 Odds subject to change.

The first in this trident of tips for Sunday’s big game is Leicester James Maddison to have one or more shots on target, available at the boosted price of 6/4 with Paddy Power. The attacking midfielder is looking back to his best after a long road back from injury and should start the game against Liverpool. In his six starts in all competitions for Brendan Rodgers side this season, Maddison has registered at least one on target on four occasions.

The 23-year-old is also the free-kick taker for the Foxes which adds an extra bit of weight to this proposition. With wins on the road against Manchester City, Leeds and Arsenal already in the league this term I’m expecting Leicester to have a good go here and Maddison’s forward play could well be key. Coral amazingly have this selection at just 4/6 which gives tons of appeal to the 6/4 offering from Paddy Power.

Jonny Evans to be carded
18/5
Booked in four of five starts this season in the Premier League Chris Kavanagh in charge of the game who averages 4.0 yellows per game this season, the joint second highest of any Premier League official
Odds correct as of 2020-11-20 16:45 Odds subject to change.

Next up I’m fancying Jonny Evans of Leicester to pick up a card, which is best priced with BetVictor at 18/5. No player in the Premier League has been booked more times this season than the Leicester central defender with four yellow cards in just five games! A remarkable ratio for the veteran and he should be in for a long afternoon against Sadio Mane, Diogo Jota and Roberto Firmino on Sunday with Leicester looking to often sit back and hit sides on the break, just as they did at Arsenal and Manchester City.

Another huge positive for this selection is that referee Chris Kavanagh will be in charge of the game. The official has brandished 20 yellow cards in five matches so far in this campaign. That average of bang on four yellows per game is the joint second highest this season after Stuart Attwell. I'm hoping Evans commits another silly foul to find his way into the book this weekend.

Premier League Betting
Sadio Mane 2+ shots on target, Milner & Mendy to be carded
55/1
Sadio Mane has registered two or more shots on target in 3/7 league games this season and there should be an added emphasis on him to find the goals with no Mo Salah Milner has been booked in three of four starts in all competitions this season Nampalys Mendy has been booked twice in eight games this season and with Chris Kavanagh averaging 4 yellows per game this season we should see plenty of cards
Odds correct as of 2020-11-20 16:45 Odds subject to change.

My longshot for the game is a 55/1 shout made up of Sadio Mane to have two or more shots on target, with James Milner and Nampalys Mendy both to be carded, again with Paddy Power.

Starting off this Same Game Multi is Sadio Mane to have two or more shots on target. This selection has landed in three of Mane’s seven league games this season and with no Mo Salah due to covid, there could be an added emphasis on Sadio to supply the goals.

James Milner is yet to start in the Premier League this season but should come into the starting line-up against Leicester due to the amount of injuries in the squad. The veteran has been booked on both occasions he has started in the Champions League this season and picked up was even booked when he started in Community Shield. That’s three cards in four starts in all competitions this season and with Chris Kavanagh in charge, Milner looks primed for a booking on Sunday.

Nampalys Mendy has given an excellent account of himself whilst enjoying a good run in the team due to the absence of Wilfried Ndidi. The Frenchman has been booked twice in eight league starts this season and bar Jonny Evans there’s nobody I would want onside more for a booking at Leicester than Mendy.

James Maddison with a free-kick from the edge of the area?