Liverpool Quadruple Odds: The odds shorten for Klopp's men to achieve the impossible 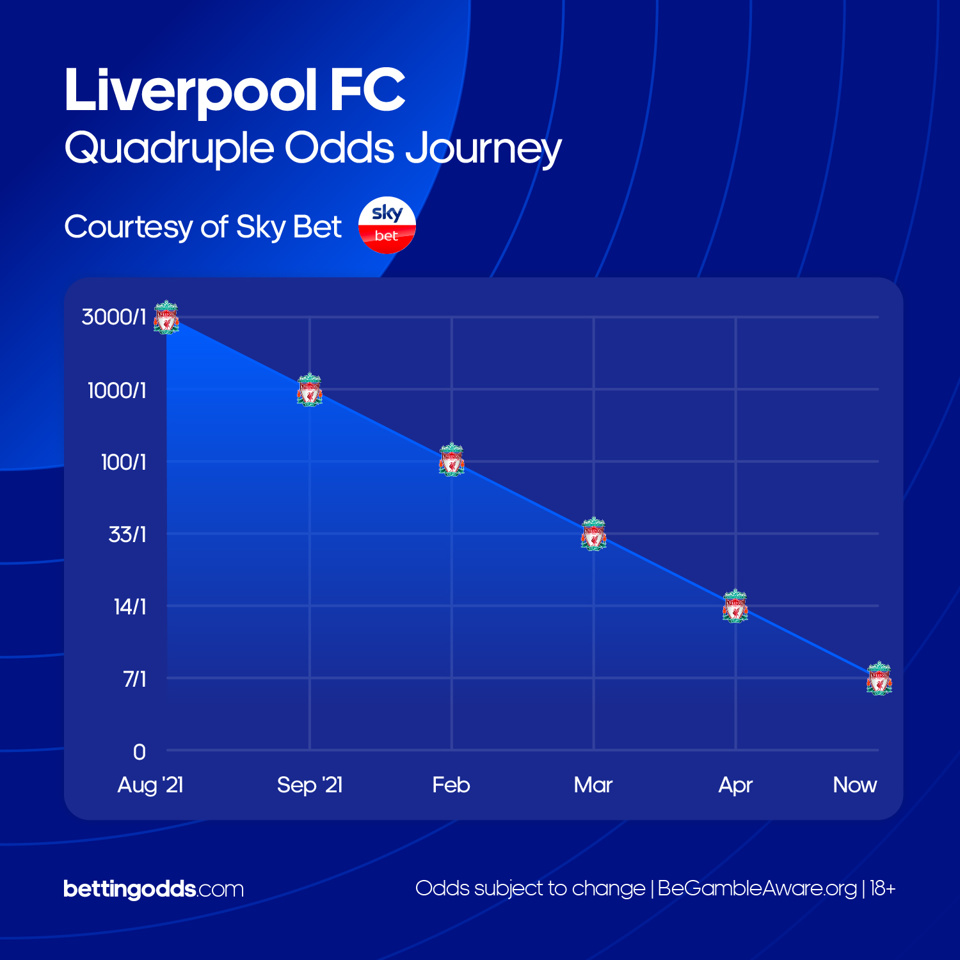 It’s the thought that will haunt fans around the country. Could Liverpool actually win an unprecedented quadruple this season?

The short answer, unfortunately, is yes. Jurgen Klopp’s side are in sensational form right now, and with one trophy already in the bag in the Carabao Cup, SkyBet, Betfair and other bookmakers have cut Liverpool’s price yet again to bring home four trophies by the end of the campaign.

As noted by Anthony Eadson in his previous article on this matter, bet365 had 1000/1 on offer at the start of the season for Liverpool to do the quadruple, which after the League Cup victory, was cut to 20/1. But now, new data from Sky Bet shows even more so how dramatic The Reds’ campaign has been. Liverpool’s price to win all four trophies available to them at the start of the season was a whopping 3000/1 with the bookmaker, many would have leaned more towards a possible league and Champions League double, given their recent successes in both competitions.

Fast forward a month to September, and Jurgen Klopp’s men were still out at 1000/1, a clear shrinking of the odds, but still quite clearly a major long-shot. As we drew closer to the end of the year, the odds again began to come down, but January would seemingly be pivotal at the time, as Man City opened up what looked to be an unassailable 14 point lead in the Premier League. Before Liverpool’s Carabao Cup Final win in February, Sky Bet had the Merseysiders out to 100/1 to complete the quadruple, but their victory over Chelsea would bring them tumbling down to 33/1.

As their showdown with Man City in the league approached, other bookmakers such as Betfair, had Liverpool at 20/1 to do the quad by the end of May, which after a 2-2 draw, dropped to 14/1 with Sky Bet. Still at a probability of 6.7% to achieve the unachievable, it was seeming unlikely.

But that has all changed following the events over the last week. The Reds overcame Benfica in the Champions League quarter-finals to set up a tie against Villarreal, meaning that they’re the favourites to win their seventh European Cup over Man City, who have to face La Liga leaders Real Madrid over the next few weeks. An explosive first half display against the previously mentioned City was enough to see Liverpool into the FA Cup Final, where they are now odds-on to lift the trophy for the first time since 2006.

All this means that Liverpool are as short as 7/1 with Sky Bet, and 15/2 elsewhere, to do the unthinkable. A probability of 12.5% means that from a factual point of view it seems unlikely, but looking at their Champions League games, and the fact they’re already in another final gives Liverpool fans more hope than ever.

It seems like currently, the only thing standing in their way of creating history, is the Premier League leaders, Man City. Liverpool have a much tougher run-in in the league, facing Everton, trips to Newcastle and Villa, as well as home games against Man Utd, Wolves and Tottenham. City have four of their last seven league games at home, with four out of the seven teams they’re facing currently sitting in the bottom half of the table.

Will Liverpool achieve what no English side has ever achieved? Let us know on our social channels.