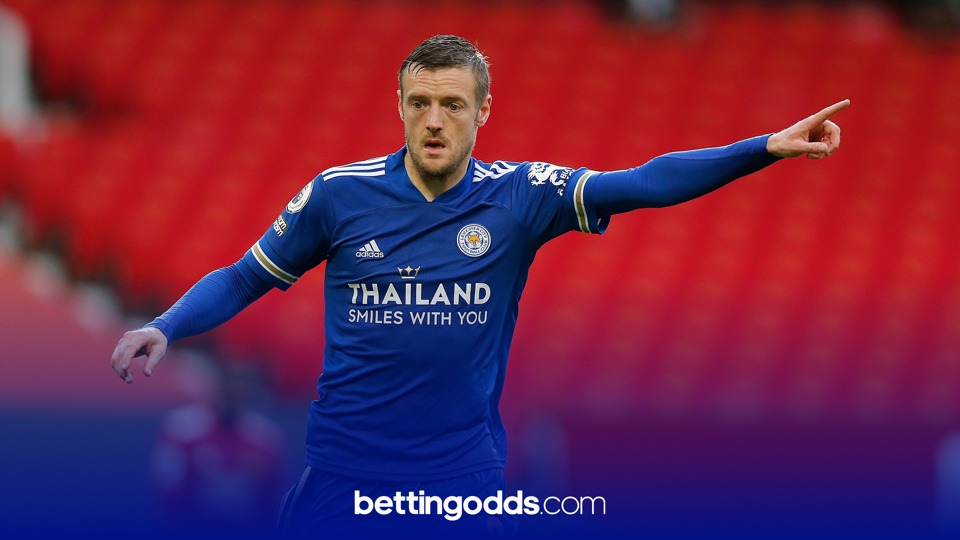 Jamie Vardy has the highest shots on target per game ratio at Leicester this season and features in our bet for the game
By Anthony Eadson
13:50 Friday 21st May 2021 - 4 minute read

Leicester City dropped down to fifth in the table on Wednesday evening after Liverpool beat Burnley. The Foxes defeat at Chelsea on Tuesday now has resulted in Brendan Rodgers’ side being outside the top-four at the end of a Gameweek for the first time this season.

With a home fixture against Spurs on Sunday, Leicester must now hope that either Liverpool or Chelsea drop points on the final day in order to guarantee a Champions League spot.

Spurs have endured a turbulent campaign and the mood at the Tottenham Hotspur Stadium after the 2-1 defeat to Aston Villa last week was an unsavoury one to say the least.

With just four points separating sixth place West Ham and ninth place Arsenal, there’s all to play for in terms of qualifying for the Europa League next term. Spurs currently find themselves seventh and will be looking not only to ensure Europa League qualification but to also finish above North London rivals Arsenal for who they are just one point ahead of.

All ten Premier League games kick off at 4:00pm on Sunday and we’ve picked out a bet we like the look of for Leicester’s clash with Spurs at the King Power Stadium. Originally priced at just short of 9/2, the good folk over at Paddy Power have given us a little boost on our double which takes us to 11/2.

King Kane in pursuit of his third Golden Boot

Heading into the final weekend of the season Harry Kane is currently tied level with Liverpool’s Mohamed Salah on 22 goals as they both seek their third Golden Boot. Talk has been rife over the last week regarding the future of Kane and you can check out his next club odds here. Back to the matter in hand and we fancy him to register at least two shots on target on Sunday.

Time and time again Kane has shown a desire to score goals and we know that this award is something that means a lot to the 28-year-old. Tottenham’s talisman has scored more goals against Leicester City than any other opponent in his career with an incredible 16 in just 15 matches.

Not only has Kane scored four more goals against Leicester than he has any other opponent, he also tops the charts in the Premier League this season when it comes to shots on target. With an average of 1.5 per game and 52 in total this season, plus the added incentive of a Golden Boot, where happy to have Spurs penalty taker onside to have 2+ shots on target this weekend.

Traditionally only clubs that had won the FA Cup had the right to use triangle corner flags and after their triumph last Saturday, Leicester City joined that elite group. One man who’s been known to kick a few corner flags when celebrating is Jamie Vardy and we’re also taking a lean towards him registering two shots on target in the final game of the season.

It’s been a rather barren spell for Jamie Vardy in this second half of the season with just two league goals since the turn of the year. The Premier League and FA Cup winner still ranks in the top ten players in the league for total shots on target this season and has the highest average at his club at 1.1 per game.

With Leicester needing to win this game to at least give themselves hope of qualifying for the top-four, we expect them to really take the game to Spurs who looked poor against Aston Villa in midweek. The mood in the Tottenham camp looks quite unsettled at the moment and it would be no surprise to see Leicester go on and win the game well.

With this in mind we’re backing both Vardy and Kane to have 2+ shots target priced at 11/2 with Paddy Power. No player in the league has registered more shots than Kane this season and with a Golden Boot on the line for himself, and a place in the Champions League at stake for Leicester we feel this bet has more of a chance than the 15% that 11/2 implies.

If having a bet on the final day, please do so in a responsible manner.