Which Premier League club could Frank Lampard realistically manage next?

Frank Lampard wants another crack at a Premier League club, that much is certain.

Yet, despite the various top-flight openings that have come-and-gone since he left Chelsea 10 months ago, he remains in the Job Centre.

Lampard was expected to return in the summer but a move to Crystal Palace never materialised, Wolves and Everton appointed Bruno Lage and Rafa Benitez respectively, while he was never going to rock up at Spurs.

He was linked with the opening at England U21s, a job many believed he was well suited for. Instead, the FA opted in-house for Lee Carsley.

Then there was the Newcastle vacancy, which he never appeared to be seriously in contention for. Aston Villa swiftly appointed Steven Gerrard last week - Lampard was reportedly interviewed - and his now former club Rangers appear to be on the cusp of appointing Giovanni van Bronckhorst.

Last week Norwich seemed to be a dead-cert after it was revealed Lampard had held talks, he swiftly moved to just 1/40 in the betting, only to abruptly pull out of contention. Dean Smith has since been appointed at Carrow Road.

Exactly why Lampard ruled himself out is currently unknown. Perhaps he decided that returning to a club rock-bottom of the table wasn’t the right move for him, or maybe he wanted to save face given that the experienced Smith was also in contention and had also held talks. We may never find out.

So, what Premier League club could realistically appoint Lampard? Whether that’s before Christmas, in the New Year, or further down the line. Let's take a look...

We’re going to instantly rule out his former club Chelsea, plus Liverpool and both Manchester clubs. You can chuck Spurs and Arsenal into this ‘no go’ pile too, as well as Leeds due to SpyGate and all the drama that followed.

While he played for West Ham at the start of his career, he’s far from popular with the Hammers’ faithful so an appointment as manager is pretty unlikely.

Not that he would contemplate a move anyway: “I remember when Joe Cole first came to Chelsea he would turn away in disappointment if West Ham lost. I would smile,” Lampard said in his autobiography Totally Frank. “That’s how deeply I felt. I wanted West Ham to lose. Now I don’t even look for their results.”

Regardless of this, it’s not even worth speculating about given that David Moyes is doing an absolutely stellar job there.

He may only have 18 months worth of Premier League experience on his CV, yet Lampard might feel that he deserves a crack at a club in European competition, or at least challenging for the European spots.

With that said Leicester is an interesting one to ponder should Brendan Rodgers - the current odds-on favourite to replace Ole Gunnar Solskjaer - be lured over to Man Utd, with Eurosport reporting that Lampard has “half an eye on the Leicester City situation in case Brendan Rodgers leaves”. Who knows if there's any truth to the report, but the Leicester project is surely one that would appeal to most managers.

The attraction on Lampard’s part is obvious, yet we’ll have to wait and see whether the Foxes would actually opt for the Englishman. For now, Rodgers remains at the King Power and has frequently stated his loyalty to the club, although his stance could possibly change in the summer if United came calling.

If that happens and he departs, then Leicester could well target someone like Graham Potter, maybe a Thomas Frank, Ralph Hasenhuttl, or a progressive manager employed elsewhere in Europe. 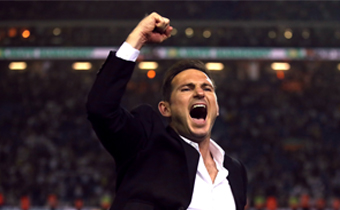 Frank Lampard is waiting out to see if a job opens up at Leicester City, should Brendan Rodgers leave for Man Utd, reports @Eurosport. https://t.co/9faukRvANc

If the aforementioned Potter was to be plucked away from Brighton, maybe a move to the south coast could suit Lampard. Similarly, if Hasenhuttl ever left Southampton.

Both appear more realistic options than Leicester. He’d more likely be given time to implement his ideas and continue his development as a coach, they’d still be a degree of scrutiny but he won’t be crucified after every defeat.

You could also place Burnley and Brentford into this bracket should Sean Dyche or Frank depart in the future. It is worth noting that Dyche recently signed a new long-term deal, while Lampard may not be viewed as the right fit for Brentford’s data-driven approach.

Patrick Vieira has enjoyed a cracking start to life at Crystal Palace, whom he’s transformed into a more attack-minded and entertaining unit. If he continues his progression then it will only fuel rumours of a future move to Arsenal. This is one for a couple of years time, not the here-and-now.

Then there’s Everton. After a reasonably bright start following his controversial appointment, Rafa Benitez is now feeling the heat after some poor results. It would still be a shock if the club did ‘a Spurs’ and pulled the plug on a summer appointment.

Otherwise, Lampard may have to settle for a return to the Championship, as Chris Wilder did earlier this month with Middlesbrough, while Scott Parker switched Fulham for Bournemouth in the summer. England’s second-tier also features other former top-flight bosses such as Nigel Pearson, Tony Mowbray, Marco Silva, and Slavisa Jokanovic.

“Frank Lampard has all the qualities to be a top manager, if a club comes with the right project.”

There are plenty of Englishman working abroad too, although not in any major roles. John Herdman is excelling at the helm of the Canada national team and Des Buckingham is over in India at Mumbai City, to name a couple.

We previously speculated that a move to the MLS could be an option - where Phil Neville currently resides - however, given his highly ambitious and competitive nature Lampard will surely be determined to return to the Premier League dugout.