With the 24 hour delay of Rangers vs Napoli, Wednesday night sees us treated to a whopping nine games in the Champions League.

Similarly to Tuesday, we here at BettingOdds.com have picked out an anytime goalscorer treble, which pays at just over 20/1 with Unibet.

While all the focus will of course be on former Dortmund man Erling Haaland as he prepares to face his old side for the first time, we’ve looked to another of Man City’s shining stars in Phil Foden to score anytime on Wednesday night.

Foden has endured a difficult start to the season, with his manager Pep Guardiola publicly stating that he hasn’t been able to match his high standards. But the Stockport Iniesta went some way to douse those flames with a classy performance against Sevilla in which he netted a delightful finish.

Foden has history against Dortmund, scoring in each of his two appearances against the German side back in the knockout rounds of the 2020/21 season. The goals he scored proved to be the winners in each leg, and with all the eyes looking to his star striker, this could be the perfect opportunity for the Englishman to net again.

Not comfortable with being one of the world’s best youngsters, Vinicius has taken his game to a new level this season, elevating himself to conversations among the world’s outright best.

The Brazilian winger tore Celtic to pieces during Madrid’s opening Champions League game, and that continued over the weekend where he scored again, making it five consecutive games in all competitions that he’s found the back of the net.

It’s safe to say that Junior loves playing in Europe’s elite competition, where he’s scored three goals in his last four games stretching back to last season, including the winner in the final.

Liel Abada to score vs Shakhtar

Liel Abada is another who has had a strong start to the season, going hand in hand with Celtic’s own. Abada’s role under Ange Postecoglou has allowed the young Israeli to be a real threat off the right hand side, which showed as he pounced to grab a brace during Celtic’s thumping of Rangers.

Abada seems to also relish playing away from home as well, as he bagged both of his goals in the Bhoys’ Europa League campaign away from Parkhead. That has also paid true this season, with two thirds of his six goals in all competitions being on the road. Celtic will of course have a tougher game against Shakhtar than they would if they were playing the likes of Ross County, but if there’s going to be anyone to grab a goal for them, don’t be surprised if it’s Abada who’s there.

The goalscorer treble pays just over 20/1 with Unibet. Best of luck if you’re following any of these bets, and please remember to gamble responsibly. 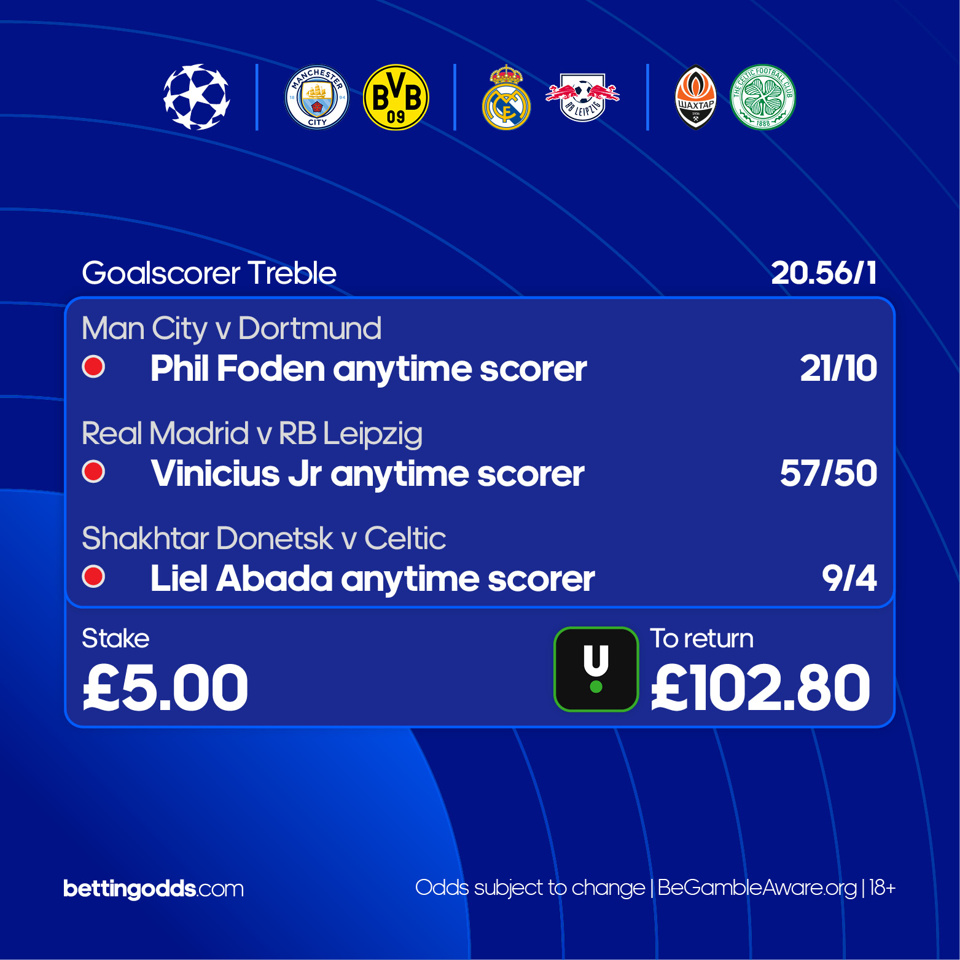 Our 20/1 treble for Wednesday night.