Football BTTS Acca Tips: Four games for both sides to find the net on Saturday 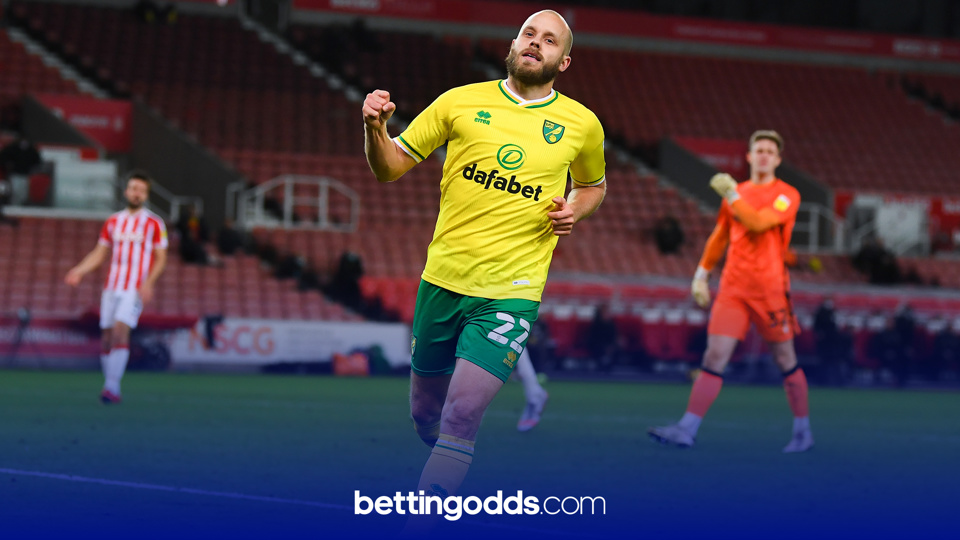 Norwich currently sit top of the Championship and feature in our both teams to score plays for Saturday
By Anthony Eadson
14:53 Thursday 10th December 2020 - 4 minute read

There’s a full card of fixtures in the football league on Saturday and we’ve decided to home in on the EFL to pick out four matches we like the look of for both teams to score. There’s a full range of football tips on BettingOdds.com this weekend but @AnthonyEadson is on hand with a 9/1 accumulator.

As always with our both teams to score multiples we like to use bet365 as they offer a soccer accumulator bonus, which in this case will yield an extra 10% on our winnings should this bet land. That takes us from around the 17/2 mark to north of 9/1 which looks a fair price for eight sides who we can make a strong case to find the net on Saturday.

The first of four games I’m fancying for both teams to score on Saturday comes from Ewood Park where Blackburn host Norwich. Tony Mowbray’s Blackburn have been good to watch going forward this season and currently rank first in the table for expected goals scored (xG) in this campaign. In Adam Armstrong they have the league's joint top-scorer with 14 goals, who certainly isn’t afraid of shooting, amassing a total of nine shots in the 1-0 defeat to Bristol City on Wednesday evening.

Norwich currently sit top of the table with a three point lead over Bournemouth. The Canaries have won five of their last seven matches and rank third in the league for expected goals this season. We have two sides here who like to attack and with both teams to score landing in all of Norwich’s five last games I think this game looks primed for BTTS to land.

Staying in the Championship, the next fixture I’ve homed in on is Luton v Preston at Kenilworth Road. Luton have seen both teams get on the scoresheet in 63% of their home matches this season, with only Stoke having a higher percentage in this division. Despite failing to score in their last two games, I think manager Nathan Jones will put added emphasis on his team to attack here with them only losing one of their last five on home soil which came at the hands of Brentford.

Preston have scored in all eight of their away league fixtures this term with an impressive average of 2.25 goals per game on the road. Alex Neil’s side have picked up more points than any other side on their travels this season with BTTS landing in 75% of their away fixtures.

Dropping down into League One and we’re off to the town of the concrete cows for MK Dons v Burton Albion. The Brewers have featured regularly in my both teams to score plays over recent weeks and it’s easy to see why when both teams to find the net has landed in eight of their last nine matches. Burton have the highest both teams to score percentage in the football league this season with 81%, combine that with the fact that 71% of MK Dons home games have seen both teams to score and I think we’ve got a really nice play here which is as big as 5/6 as a single with some firms.

The final game in this quartet for Saturday afternoon comes from League 2 where Leyton Orient take on Newport. Michael Flynn’s Newport currently sit top of the pile in League 2 and are the bookmakers favourites at 5/2 to be the Champions come May. They have lost just once in their last eleven league games and have seen both teams to score land in 67% of their fixtures this term. Orient have lost their last two but after scoring 10 goals over their last five games they will believe they can get on the scoresheet on Saturday.