Sam Gallagher was on the scoresheet on Sunday and features in our 10/1 Acca on Wednesday
By Anthony Eadson
16:32 Tuesday 16th August 2022 - 4 minute read

Four Championship matches take place on Wednesday with Sheffield United vs Sunderland the live showing on Sky Sports. You can read a full preview for that game here at BettingOdds.com. We’ve also put together an acca for the night’s proceedings which combines four players to have a shot on target, and pays 10/1 with bet365.

Let’s start with Sheffield United vs Sunderland at Bramall Lane where we are taking Sander Berge to hit the target at least once in the match. The Blades have had a tough couple of fixtures with two away trips, firstly away to West Brom in the Carabao Cup and Middlesbrough in the league. Paul Heckingbottom’s side were knocked out of the cup by the Baggies but managed a point in a 2-2 draw away at Middlesbrough on Sunday.

One player who was on the scoresheet against Boro was Sander Berge who bagged his second goal of the season with a strike from the edge of the box. I don’t expect Berge to go on scoring at a rate of 2 goals in three matches for the rest of the season, but after taking up a more attacking role in the first two league matches of the campaign, I think the wise play here looks to back him in the shots on target market. Bet365 have 8/11 available on Berge to hit the target against Sunderland, something he has done in all three appearances so far in 2022/2023.

Next up we are off to the home of bet365, Stoke, where the Potters take on Middlesbrough. The player I’m focussing on here is Lewis Baker. The former Chelsea man signed for Stoke back in January and managed an impressive eight goals in 21 appearances in the second half of last season.

Baker found the net in his side's disappointing 3-1 away defeat to Huddersfield at the weekend getting himself off the mark for the season. The 27-year-old let off five shots on his trip to West Yorkshire in that game, following up from the five he recorded against Blackpool the week prior. Baker recorded three shots on target against Huddersfield and he looks a really attractive price to do so at 6/4 against Boro, albeit a much tougher opponent. 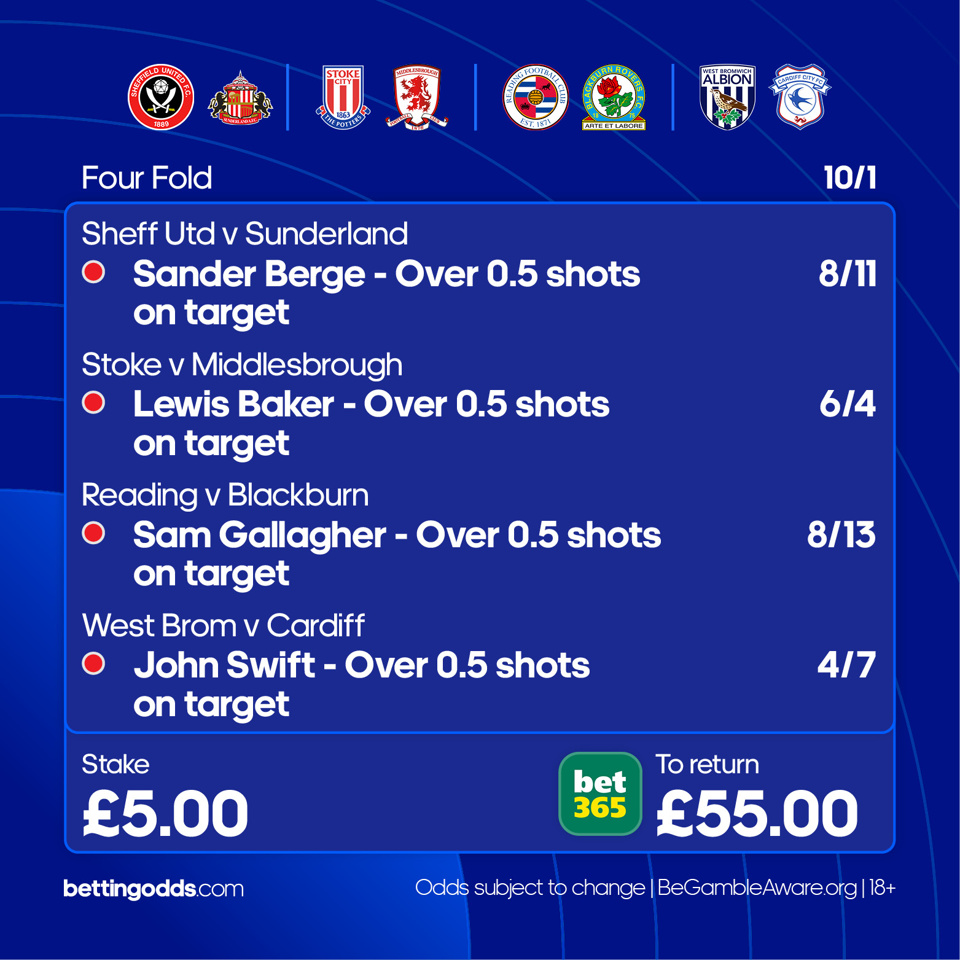 After Matchweek 3 in the second-tier Blackburn were the league leaders and are the only team currently to possess a 100% win record in the division. Rovers managed a 2-1 victory over West Brom on Sunday, in a game where they conceded their first goal of the season in all competitions, coming via a huge deflection on a Grady Diangana shot.

Sam Gallagher is not always known for his precise finishing but showed a clinical touch to slot home a left footed effort from the edge of the area, when adding Blackburn’s second on Sunday. Now with the main role in attack for Jon Dahl Tomasson’s side, with Brereton Diaz coming in off the left, Gallagher can increase his output of nine league goals last season. I’m backing him to have 1+ shot on target in what is a winnable game for a Blackburn side that should be high on confidence.

The final selection in this 10/1 acca comes from the Midlands where West Brom take on Cardiff. John Swift is the player we are siding with to hit the target here. In his three matches so far in 2022/2023 Swift has recorded shot figures of, 4, 3, and 1. When it comes to hitting the target Swift has done so in every league game so far with figures of 2, 2, and 1. Steve Bruce’s men have generated more xGF (Expected Goals For) this season than any other side in the Championship and we expect them to create plenty against Cardiff with John Swift hopefully at the heart of it.