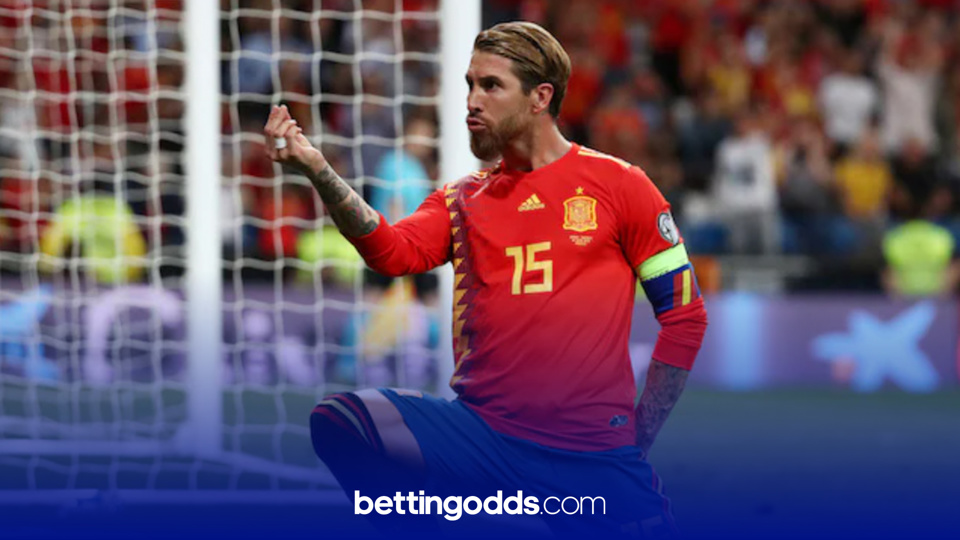 Spain are unbeaten since November 2018 and feature in our football tips for Tuesday evening
By Anthony Eadson
17:02 Monday 12th October 2020 - 4 minute read

There’s a plethora of football to get stuck into on Tuesday evening with games from England’s League One and Two as well as the UEFA Nations league with fixtures across the continent.

Germany v Switzerland is the featured game on Sky Sports kicking off at 19:45, however viewers can watch the other Nations League games via the red button. I’ve picked out a 9/2 treble that I like the look of for Tuesday as part of my football tips for BettingOdds.com this week.

Tuesday's Acca
Cheltenham to win, Crewe to win or draw, Spain -1 handicap
9/2
Cheltenham have won their last three games to nil. Grimsby failed to register a shot on target on Saturday and have just 1 point in the league.  Crewe have won two games on the bounce against Wigan and MK Dons and look a reasonable price in the double chance market against Oxford Spain take on Ukraine who are riddled with Covid-19, injuries and suspensions. Spain are unbeaten since November 2018 and beat Ukraine 4-0 in September
Odds correct as of 2020-10-12 17:00 Odds subject to change.

The first of three games I’ve picked out selections for comes at 19:00 from League Two, where Cheltenham host Grimsby. It may not sound the most glamorous of ties on paper but I’m backing the hosts to come out on top in what I think should be a convincing win.

Michael Duff’s side had one of the best defensive records in English football last season, conceding 27 goals in 36 games. They have started this campaign with their defence being just as water tight, conceding only two goals, which both came on the opening day of the season against current leaders Morecambe.

Since then the side from the Cotswolds have put together three consecutive league victories and have kept a clean sheet in all of those games. Grimsby on the other hand have just one point from their first three games. That came in a goalless draw against Bolton on Saturday where both sides failed to register a single shot on target. Cheltenham look a good prospect to be promoted this season and they should come out on top against Grimsby on Tuesday.

The second in this trio selections for Tuesday also comes at 19:00 where Crewe make the trip down the M6 & M40 to Oxford United. I’m backing Crewe in the double chance market to either win or draw the game which looks reasonably priced at 8/11 as a single.

After being promoted from League Two last season, David Artell’s side have taken six points from their opening four games in their new division. Crewe’s most recent result was a 3-0 win over Wigan and prior to that the Cheshire side turned over MK Dons 2-0.

Oxford have had a relatively patchy start to the campaign under Karl Robinson. The Yellows have won just once in the league this season with that victory coming against a 10-man Accrington Stanley. I’m surprised to see Crewe at such a big price in the double chance market, and I’m backing them at 7/10 to earn at least a point at the Kassam Stadium.

Rounding off proceedings for the evening is Spain to win with a -1 match handicap, meaning if they win by two or more goals, this selection will land. La Furia Roja travel to Kiev to take on the Ukraine on Tuesday and the hosts are absolutely riddled with injuries.

A combination of Covid-19, injuries, and suspensions have given manager Andriy Schevchenko a real selection headache ahead of his sides games against Spain. Ukraine have lost their last two matches to a combined score of 9-2 in the last week and I don’t think things will get easier on Tuesday.

Spain ran out 4-0 winners against Ukraine back in September and Luis Enrque’s side are now unbeaten since November 2018. After failing to score against France last week as well as a narrow 1-0 victory against Switzerland, this is a good opportunity for Spain to rack up some goals. At even money the visitors make some appeal in the match handicap market and I’ll be backing them to win by two goals or more with the handicap -1.

We’ve hit the bar with a few of my tips over the last week so best of luck to those following. Please always gamble responsibly, and never bet more than you can afford to lose.

Switzerland, what are you doing?! 🤦♂️

The Swiss are the architects of their own downfall here as they put it on a plate for Oyarzabal to sweep home.