Football Accumulator Tips: Rampant Rangers to march on in Europe 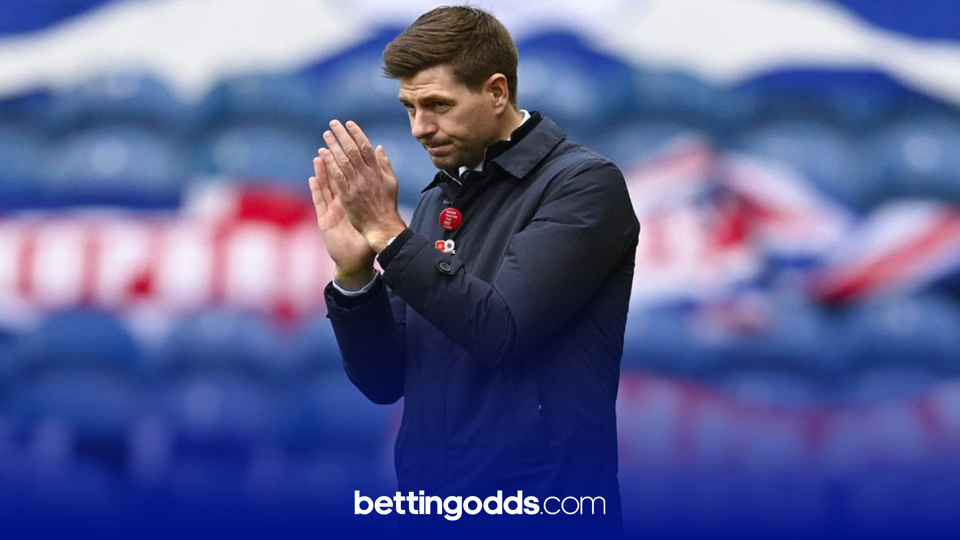 Steven Gerrard's side have won their last seven games on the bounce to a combined score of 19-2
By Anthony Eadson
17:15 Wednesday 28th October 2020 - 3 minute read

It’s the second round of Europa League group fixtures this Thursday and fresh after a 4/1 winner last week, I’m back with another play for Europe’s secondary club competition.

There’s a spread of fixtures on Thursday with 12 games at 5:55pm and another 12 at 8:00pm. I’ve decided to focus on the 8:00pm matches and have picked out three football tips I like the look of for the games. The treble pays around 3/1, however those good folk over at Paddy Power have given this a generous boost up a notch to 4/1.

Europa League Treble
Rangers, Leverkusen & Granada all to win
4/1
Rangers are unbeaten in all competitions this season and have won their last seven on the bounce to a combined score of 19-2. Granada sit third in La Liga, one point off top with a game in hand. They come into the game off a back of a 2-1 win at PSV Eindhoven last week Leverkusen are also unbeaten in all competitions this season beat Nice 6-2 last week and should have to much for Slavia Prague
Odds correct as of 2020-10-28 16:40 Odds subject to change.

The first in this trident of teams who make up Thursday’s tips is Rangers, who take on Lech Poznan at Ibrox. The Gers are currently unbeaten in all competitions and sit six points ahead of city neighbours Celtic in the SPL.

In the first round of Europa League fixtures last Thursday, Rangers dispatched of Standard Liege with 2-0 win away in Belgium. The opponents for Rangers this week are Lech Poznan who were beaten 4-2 by Benfica seven days ago. The Polish outfit are winless in their last three matches and are without their key man Pedro Tiba for their trip to Scotland.

There’s a real positive energy around Rangers at the moment. They have won their last seven games on the bounce to a combined score of 19-2 and look good to extend their streak against Lech Poznan. With four clean sheets in their last four I also wouldn’t put anyone off Rangers to win to nil, priced at 13/8, however I’ll be sticking to just the outright win for my treble.

Next up I’m fancying Bayer Leverkusen to win away in the Czech Republic as they face Slavia Prague. Peter Bosz’s Leverkusen side are currently unbeaten in all competitions this season and sit fourth in the Bundesliga after five matches.

Leverkusen come into the game off the back of three consecutive victories, most recently against Augsburg 3-1 at the weekend. The Germans also pasted French side Nice 6-2 last Thursday in the Europa League and they should have enough to overcome Slavia Prague here. The home side were beaten 3-1 at Hapoel Be’er Sheva last week and they face a higher quality opponent this week in Leverkusen.

Rounding off Thursday’s selections is Granada to beat PAOK Thessaloniki in the foothills of the Sierra Nevada mountains. Granada currently sit third in the La Liga table, just a point off Real Sociedad in first, with a game in hand. They have made a fantastic start to the new term with 13 points in the league and have only been defeated once, which came at the hands of Atletico Madrid.

This season, Grenada have kept clean sheets in victories over Sevilla, Bilbao and Getafe. Hard to break down at times, the Spanish outfit then went to PSV Eindhoven and came away with a hard fought 2-1 win! PAOK Thessaloniki travel to spain for this clash and currently sit sixth in the Greek Superliga table. The visitors have won just one of their last seven games in all competitions.

Rangers v Lech Poznan can be viewed live on BT Sport 3 at 8pm and best of luck to those following the selections. As always, please remember to gamble responsibly.