get offer get offer
#AD. New customers only. Place your FIRST bet on any market at odds of min 2.0 (EVS) and if it loses we will refund your stake in CASH. Max refund for this offer is £20. Only deposits made using cards will qualify for this promotion. T&Cs apply. 18+ begambleaware.org

We have a bumper line up of eight Premier League games being played on Saturday, including six being played at the traditional 3pm kick off time. We've asked our man Adam Roberts to pick us out an interesting looking bet and he's responded with a whopping 145/1 trixie of players to be carded. 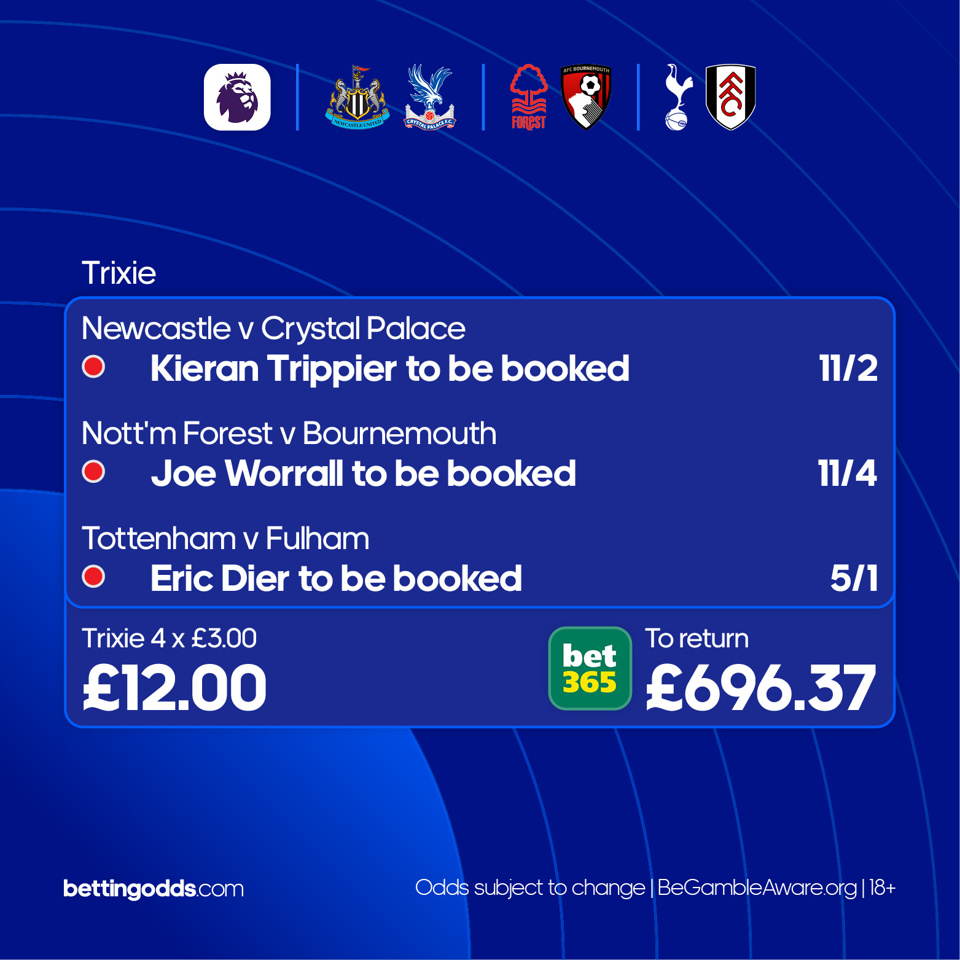 Kieran Trippier to be carded

We start at St James' Park for the match between Newcastle United and Crystal Palace. Wilfried Zaha is a constant thorn in any Premier League side and that is unlikely to change here. The 29-year-old Ivorian led the league by a mile last year for fouls drawn with 101 and he's started in exactly the same form this campaign, leading the charts with 14 in just five games. He's directly up against Kieran Trippier on Saturday, who has already picked up two cautions and had a red card overturned when he brought down Kevin De Bruyne against Man City. Expect something similar against the rampaging Zaha on Saturday.

Eric Dier to be carded

Next up we have a London derby from the Tottenham Hotspur Stadium between Spurs and Fulham. I've used the exact same thinking as in the previous bet but this time centred around Aleksandar Mitrović. The 27-year-old Serb has carried his Championship form into the Premier League and has notched five goals in five games, second only to the freak that is Erling Haaland. Mitrović is an absolute handful whether the ball is played into his feet or when arriving into the box with his head. He has drawn 11 fouls already this season and is up against Eric Dier here today. Dier isn't one to dive into tackles and has excelled this season, but he hasn't faced someone who will cause him problems like the big Serb.

Joe Worrall to be carded

Last up we have a match-up between two of the newly promoted sides, Nottingham Forest and Bournemouth. Forest have been ridiculously busy in the transfer window but one area they haven't really addressed is central defence. The trio of Scott McKenna, Steve Cook and Joe Worrall is probably the slowest in the Premier League and it has been exposed time and time again so far. Here they are up against the combative pair of Kieffer Moore and Dominic Solanke who will be physical and look to get in behind them. Worrall has picked up three cautions already and accumulated ten in the Championship last season.

The three selections can be had as singles at the best prices listed above or combined into a trixie at bet365 for a huge 145/1 price. If two of the bets come in we are in profit.