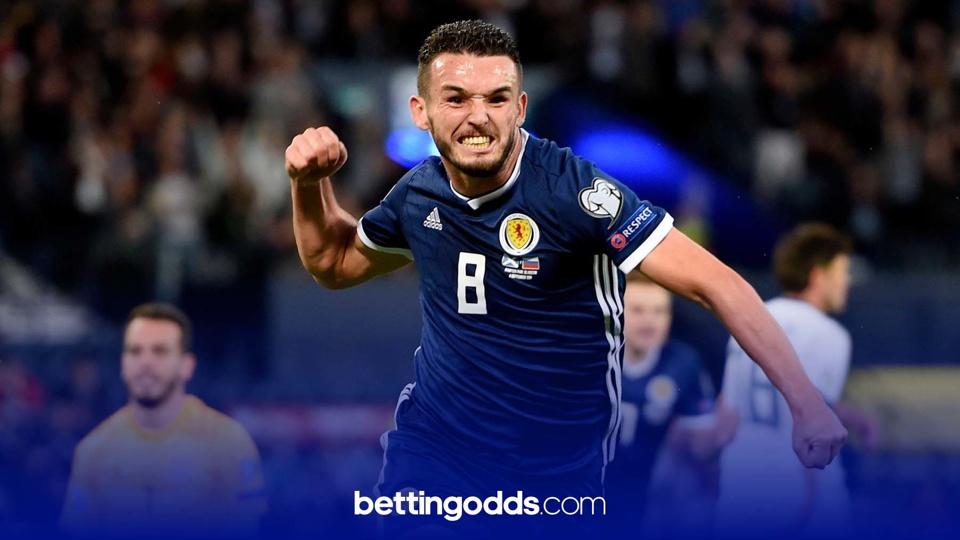 John McGinn has been superb for Villa this season and his Scotland side feature in our 14/1 accumulator
By Anthony Eadson
17:10 Wednesday 7th October 2020 - 5 minute read

Cast your mind back to before the pandemic and there was still the small matter of the Euro 2020 play-offs to be decided. Those fixtures commence on Thursday with Scotland, Ireland and the Republic of Ireland all featuring in huge matches.

Covid-19 is making proceedings particularly complicated and it may be worth holding off until an hour before kick-off before making your selections. There’s also International friendly action on Thursday with England taking on Wales live on ITV at 20:00.

There’s plenty to play for with three of the home nations having the opportunity to take a giant step towards reaching next summer’s delayed finals and I’ve picked out a 14/1 accumulator to accompany Thursday’s fixtures as part of my football tips for BettingOdds.com this week. At the time of writing PaddyPower are currently best priced at just over 14/1.

England take on Wales at Wembley stadium at 20:00 with the hosts having not lost to Ryan Giggs’ side since 1984. To find the last time that England lost on home soil to Wales you have to go all the way back to 1977. I’m backing the Three Lions to come out on top once again in this friendly despite plenty of speculation about who will feature for either side.

It has been rumoured that Gareth Southgate will go with in-form Everton striker Dominic Calvert-Lewin from the start against the Welshmen. The 23-year-old has scored a remarkable nine goals in all competitions for Everton this season and with Gareth Southgate handing him his first cap, he will be itching to impress. Chances like this don’t come around everyday and I expect several other players such as Jack Grealish to also put in a really big performance and use this as an audition for a place in the squad for next summer’s Euro’s.

England have lost just once on home soil in their last 22 games, which came against Spain over two years ago. In five of their last ten at home they have kept a clean sheet and I think the quality should shine through here of England’s up and coming crop of young starlets.

Next up I’m fancying Scotland to beat Israel at Hampden Park. The hosts have drifted a little in the betting markets off the back of the news that Kieran Tierney, Stuart Armstrong and Ryan Christie will miss the game due to contracting Covid-19. That has now taken the hosts to a very backable price of 13/10 which I think gives plenty of appeal.

Steve Clark’s side managed a superb 2-1 away win in the Czech Republic back in September and I have a feeling they will produce another bold performance against Israel. Scotland and Israel played out a 1-1 draw during their Nations League game in September but I think the Premier League influence of John McGinn, Andy Robertson and Scott McTominay can swing this one in favour of Scotland.

Israel have failed to keep a clean sheet in their last nine games and have shown plenty of defensive frailties. Scotland are also now unbeaten in their last five and at the prices here I’m opting for a home win.

Northern Ireland will be looking to reach consecutive European Championships for the first time in their history against Bosnia on Thursday but they face a tough task over in Sarajevo. Bosnia are priced at around even-money to win inside 90 minutes - an implied 50% probability. That’s a reasonable price for this side on home soil and I’ll be adding them into Thursday’s accumulator for the win.

It will be incredibly difficult for new Northern Ireland manager Ian Baraclough to reach the highs that Michael O’Neil did with this side back in 2016. It’s arguable that they had a much better side then and with their most recent game being a 5-1 defeat to Norway, I’ve little hope for them progressing here.

Bosnia beat Northern Ireland twice back in 2018 and they might not be the most attractive side to watch but Dusan Bujevic’s side can come out on top against a Northern Irish outfit who have conceded 12 goals in their last three games.

Rounding off this quadrant of selections for Thursday’s International fixtures is Slovakia to draw with the Republic of Ireland over in Bratislava. It’s worth noting that if this game does finish with the scores tied after 90 minutes it will go to extra-time and penalties.

Ireland and Slovakia have actually drawn on all four of their most recent meetings and I think this game looks primed to make that stat five-in-a-row. I think both sides will be relatively nervous and this could be a very low-scoring affair. The draw has been well supported in the markets this week and is actually now shorter than 2/1 in places. I’ve taken the 21/10 with Paddy Power as this looks the logical play here, which could round off a terrific Thursday evening.

Thursday's International Acca
Scotland, England, Bosnia all to win, Republic of Ireland to draw
14/1
The last time England were beaten on home soil by Wales was back in 1977 Scotland beat the Czech Republic 2-1 away from home last time out and are unbeaten in their last five games Bosnia look a tough opponent for Northern Ireland with Ian Baraclough's side being beaten 5-1 in their most recent game The last four meetings between Slovakia and the Republic of Ireland have all ended in a draw
Odds correct as of 2020-10-07 17:25 Odds subject to change.
Free Betting Offers