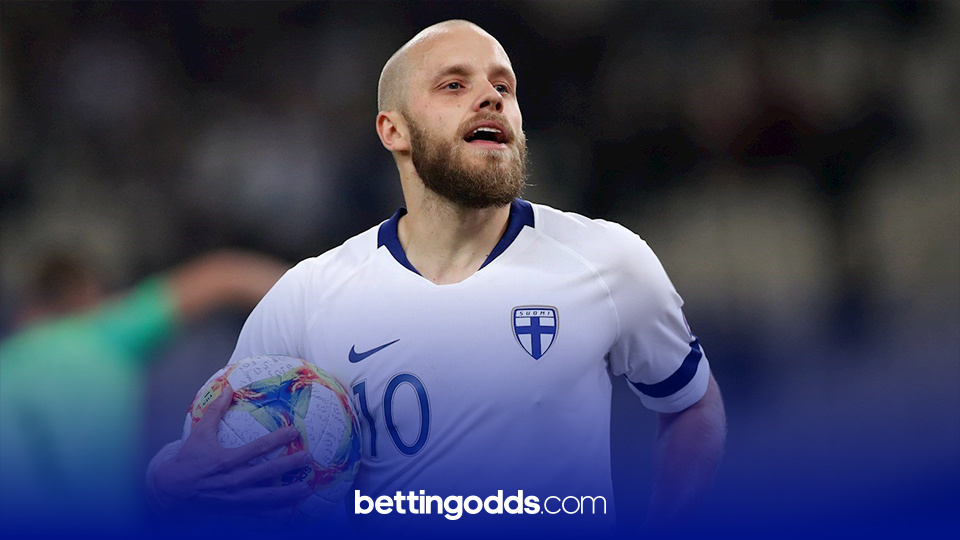 Finland haven't ever qualified for a major international tournament so it is no surprise to see them priced at 500/1 to win this year's competition. Placed in a really tough group alongside Belgium, Denmark and Russia, I don't see them progressing through to the knockout stages and think that their journey will end in the group stages soon after it begins.

Norwich striker Teemu Pukki is undoubtedly Finland's best player. The 31-year-old has enjoyed another tremendous campaign in front of goal, scoring 26 league goals to help the Canaries win the Championship. They will need Pukki at the forefront of their attack to stand any chance of qualifying for the last-16, though it remains to be seen whether or not he will make Euro 2021 after damaging ankle ligaments in a 4-1 win over Reading at the start of May.

Left-back Niko Hämäläinen is one of the few players in Finland's squad to have played regularly in a really strong league this term. The QPR defender will bring experience to this Finland team and offer some real quality down the left hand side, but with 6 bookings to his name this season is perhaps worth keeping an eye on in the cards markets for Euro 2021.

Glen Kamara has been an ever-present member of Rangers' midfield this season, as the Scottish side won the SPFL title in emphatic fashion. The bullish holding midfielder will add strength and power to this Finland side and, like Hämäläinen, he loves a tackle (5 bookings this season) so is worth taking a look at in the cards markets when the Finnish are in action at the Euros.

21-year-old striker Marcus Forss has only made 3 appearances for the national team but has scored once in those games and is clearly a huge talent. The Brentford front man has notched 10 goals in all competitions this season and is already valued at over £3m by Transfermarkt.

He is a really exciting player and one we cannot wait to watch at the Euros, and if Teemu Pukki is ruled out with injury, will be relied upon heavily to score the bulk of the goals for Finland at the upcoming Championships.

Finland are 500/1 outsiders to win Euro 2021. Alongside North Macedonia (also 500/1), they are the biggest-priced team in the outright betting ahead of the tournament.

Finland's manager is Markku Kanerva. As a player, he made 59 appearances for the national side between the years of 1986-1995 and previously coached the Under-21s for six years before getting the job as assistant manager to the senior side in 2011. In 2016, he was promoted to head coach - a position he has remained in ever since. This will be Kanerva's first appearance at a major international tournament as a player or a manager.