Euro 2021 Betting: Four players to be carded in the Quarter-Finals 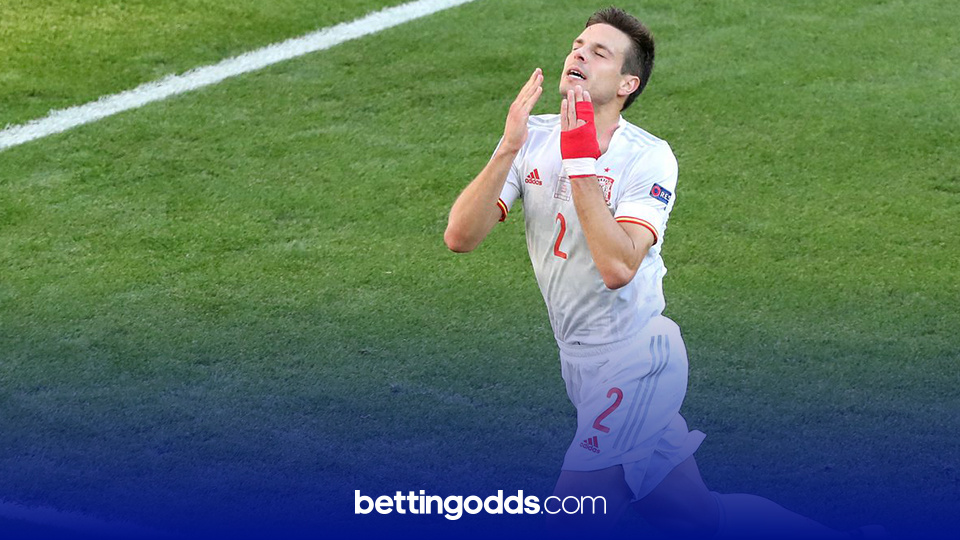 We’ve reached the quarter-final stage of Euro 2021 and just eight teams remain in the tournament with England the current favourites at 2/1 to go on and lift the trophy. There’s two games this evening with Switzerland taking on Spain before Belgium face Italy. Saturday sees the Czech Republic play Denmark before England’s game with Ukraine in Rome.

We’ve picked out a player from each game who we like the look of to be carded which when combined into a 4-fold with bet365 pay 1150/1 with bet365. We’ll be playing the trebles and 4-fold on these selections although it will be profit for those on the singles, should any of the four land.

The first in this quartet ‘to be carded’ over the next couple of days is Chelsea right-back Cesar Azpilicueta who's currently best priced with BetVictor to be shown a card against Switzerland at 7/1. The 31-year-old picked up five yellows and one red card in just 24 starts in the last Premier League season, with two further bookings coming in cup competitions for Chelsea.

A large proportion of the thinking behind ‘Dave’ being carded is that he will be up against Steven Zuber of Switzerland who has been a real threat down the left side. No player at the tournament currently has more assists than Zuber who’s crosses and range of passing has been exceptional at the tournament. Quotes of 7/1 look slightly too big in our opinion.

Next up at 8pm Belgium take on Italy in Munich and the player we are touting in this match is Borussia Dortmund’s Thomas Meunier. There’s no denying that both Eden Hazard and Kevin De Bruyne will be a huge loss for Roberto Martinez’s side and one way that the Italians will look to attack is through Leonardo Spinazzola who had been a menace going forward throughout the tournament.

Thomas Meunier will be tasked with tracking Spinazzola who is averaging two shots a game and already has an assist to his name at this summer’s Euros. In the 2019/2020 campaign Meunier was shown three yellows in five Champions League matches and that summer went on to pick up two bookings in four games for Belgium in the Nations League. With a tendency to be carded in big games, the 7/2 from Paddy Power looks a reasonable price all things considered.

Moving onto Saturday games and Tomas Soucek is a player on our radar to be carded. Soucek enjoyed a successful campaign with West Ham in his first full season in England with the 26-year-old picking up more yellow cards than any other member of the Hammers squad last term with seven cautions in the Premier League.

Soucek’s average of 1.8 fouls per game in the league was also by far the highest at West Ham with only four players in the entire division possessing a higher foul rate per game. Paddy Power have Soucek priced at just 11/5 to be carded on Saturday so we'd recommend taking the much better option of 10/3 from bet365.

After proving his doubters wrong, Raheem Sterling is now the 6/1 favourite with some bookmakers to be named the Best Player of the Tournament and is in with a shout for the Golden Boot with three goals to his name.

Bet365 currently have Sterling to be carded against the Ukraine at a rather attractive looking 17/2. The Manchester City forward was shown four yellow cards in the Premier League last term, picking up another both in the Champions League and League Cup. Both William Hill and Sky Bet have Sterling at just 4/1 to pick up a card from referee Felix Brych and with nine yellows across the last two league campaigns Sterling looks a good value proposition.

Remember for those playing the singles it will be profit if any of the four land, although we will be taking the trebles and four-fold in the hope of that big win. Best of luck to anyone following and please always gamble responsibly.

Side with Griezmann in the Shots on Target market

Porto vs Atletico Madrid Odds as BettingOdds.com provide their Betting Tips for the Champions League match on…

#Ad. 18+ Playsafe. Place a pre-match £10 bet on any Football market between 2nd December and 24th December, at min. odds 1/2 (1.5) — get a total of £50 in free bets, £30 on bet settlement and an additional £20 the following day. Your qualifying bet must settle by Friday 23:59, 24th December. Only deposits via Cards will qualify (Apple Pay deposit excluded). T&Cs apply. Please Gamble Responsibly. 18+ begambleaware.org
get offer

#Ad. 18+. UK/IRE mobile customers only. Min Odds of (2/1). Place a bet of £/€5 on any Bet Builder in the AC Milan v Liverpool match on 07/12/2021. Free Bet can be used on any in-play single for the same match. One qualifying bet per match (first bet placed). Free/void/cashed out bets won’t qualify. Free Bet will be credited after kick off and expires 7 days later. T&Cs apply. 18+ begambleaware.org
get offer