Paul Pogba was a World Cup Winner with France in 2018 and his side are 11/2 shot to taste glory at the European Championships next summer.
By Anthony Eadson
17:37 Monday 9th November 2020 - 6 minute read

Off the back of the utter chaos that has occurred in 2020, the European Championships have been put back until June 2021. There’s still plenty to get excited about with what looks quite an open betting heat. @AnthonyEadson looks at whether France could be the perfect Ante-Post punt to be backing ahead of next summer’s Euro 2021 tournament.

When it comes to Ante-Post punting I often like to find a selection I can back over the course of a season. One market I’ve been looking at lately is the winner market for Euro 2021 and at the time of writing the top six in the market reads:

As we can see it’s a very competitive market with not much between the first six teams in the betting. I had my first punt on this market around a month ago, taking 6/1 on France to be the outright winners. Les Blues reached the final of the 2016 European Championships, before going on to lift the World Cup in 2018 and I’m quietly confident that they will go well again in Euro 2021.

One of the biggest factors behind my confidence in France for next summer’s renewal of the European Championships is simply their squad depth, it’s outrageous! In every position across the pitch, manager Didier Deschamps is blessed with talent, with the ranks stocked full with a caliber of player that other nations could only dream of.

In goal, France have Tottenham’s sturdy Hugo Lloris. The shotstopper now has 118 caps for his country and is one of the vital organs of this side with his experience not only in commanding a defence, but also in major tournaments. Adequate backup is ready to be called upon if needed in the form of Lille’s Mike Maingan or Marseille’s Steve Mandanda.

I actually think centre-back could be France’s most equipped position on the pitch with tons of talent waiting to step into the starting line up. Raphael Verane, Clement Lenglet, Aymeric Laporte and Kurt Zouma will be fighting for places in the starting line-up and that’s even before we’ve got onto Presnel Kimpembe, Samuel Umtiti and Dayot Upamecano.

In the full-back positions there’s Benjamin Pavard and Lucas Digne of Everton who could feature predominantly in the tournament. Lucas Hernandez, Leo Dubois and Ferland Mendy are all excellent replacements if needed.

In the middle of the park N’golo Kante gives the side plenty of balance and for his country Paul Pogba can often look a completely different player. Corentin Tolisso could line up here while there are also options with Adrien Rabiot, Steven N’Zonzi and Moussa Sissoko. You may think these are slightly defensive midfield options but I think with the attacking prowess that they possess it gives the side real balance.

In the final third of the pitch France’s options are endless. We’ll start with Kylian Mbappe who is quite simply one of the best talents in Europe and seems to be improving each season. Antoine Greizmann is another superstar in the ranks along with Kingsley Coman who has won league titles in France, Germany and Italy. Alexandre Lacazette and Oliver Giroud are options down the middle and that’s without even mentioning names such as Anthony Martial and Ben Yedder. 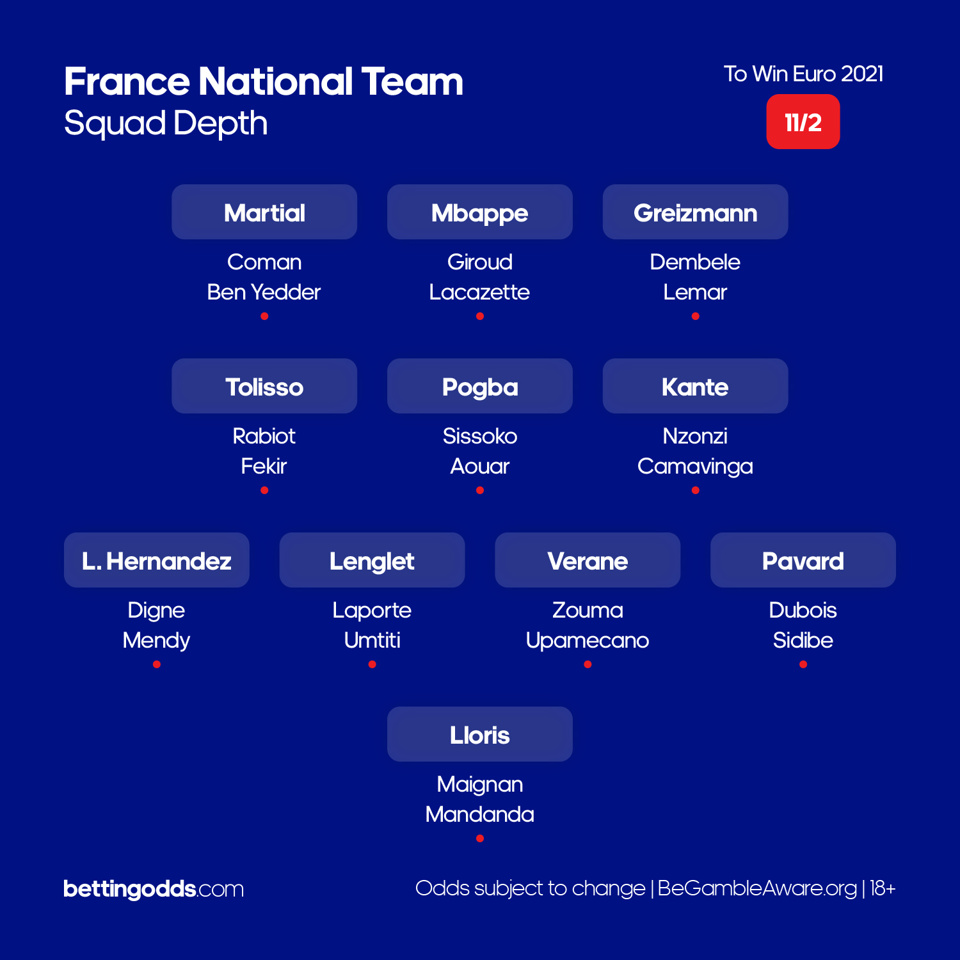 So why are England favourites for the tournament, with the reigning World Champions priced at 11/2 you may ask. Well the main reason for this in my opinion is the group that France have been handed at the tournament. Many have dubbed Group F the ‘group of death’ with France, Portugal, Germany and the winner of the play-off between Hungary and Iceland.

One thing to remember here is that four of the six teams that finish third in their group, will still proceed to the next round. The four best placed third finishers will advance to the knockout rounds as we say bye to eight of the 24 sides after the group phase.

With this the case I still see France qualifying for the knockout phase of the competition, however with the strength of their group with Germany and Portugal, I do believe that we are seeing a slightly bigger price on them winning the tournament than if there were in England’s group for example with teams such as Croatia, the Czech Republic and Scotland or Serbia.

So what do we think, worth a bet for next Summer. In my opinion yes. There is no way I could be backing England for a major tournament at odds of just 5/1 and when comparing France to those around them in the market I think they really stand out.

Didier Deschamps has been in charge of the National side for eight years and knows this current crop of players well. They have been through a lot together and one thing they have instilled over the last few years is a winning mentality.

Many of the players in the current squad have been to both the European Championship final and were part of the World Cup winning team. That vital experience is something that may well have to be called upon to pull them through some of their matches next summer and with leaders such as Hugo Lloris and Raphael Varane on the pitch, I think they stand in good stead.

France have an excellent blend of youth and experience with Kylian Mbappe at the head of proceedings I believe they have the most potent striker at the tournament.

When it comes to their opponents in Germany and Portugal I’m also quietly confident in France’s ability. The Germans have not beaten France in their last five meetings with the last defeat for Deschamps side coming back at World Cup 2014. Yes both sides are different now but France’s recent record gives plenty of confidence here.

France v Portugal is not a fixture that happens every year, however France have beaten the Portugese in ten of their last twelve meetings. Portugal outdid France at Euro 2016 but In this current crop I think we have a team who can win back-to-back major tournaments just like Spain did a decade ago.

Ante-Post betting can often be one of the best ways to the big money, so if you are looking for something to add into your season long accumulator you may want to consider the French. Another strategy I like to deploy with Ante-Post betting is using your free bets from bookmakers (should you be awarded any). Spend your £10 from Paddy Power or £5 weekly free bets from Sky Bet wisely and you can give yourself something to follow and potentially a healthy return further down the line.