In the early weeks of 2013 the name ‘Mauricio Pochettino’ was being frantically hammered into Google search bars across the Southampton area, after perplexed supporters had just been informed that the Argentine - who they soon discovered was the guy that fouled Michael Owen at the 2002 World Cup - had just replaced their beloved boss Nigel Adkins.

The St Mary’s appointment may have been both controversial and unexpected but it didn’t take long for Pochettino to win over any doubters. In the first couple of months he masterminded impressive wins over Man City, Liverpool and Chelsea, and in turn steered the relegation-threatened Premier League club to a credible 14th-place finish. A year later and he’d led the Saints up to 8th spot, which represented their joint-best-ever standing in the Premier League, complete with a club-record points tally (56).

In the space of those memorable 16 months, the former Espanyol boss - who back then used a translator - incorporated an effective and energetic high-pressing game, as Saints evolved into one of the most conditioned teams in the top-flight. "I'm the fittest I've ever been in terms of the running he makes us do,” beamed James Ward-Prowse.

When Pochettino was lured over to Tottenham in the summer of 2014, Southampton - while gutted at the time - had their bank account swelled by £92million through the transfers of five key players - including captain Adam Lallana, Dejan Lovren and Luke Shaw - which highlighted the Argentine’s incredible ability to develop and improve players over a short-period of time. 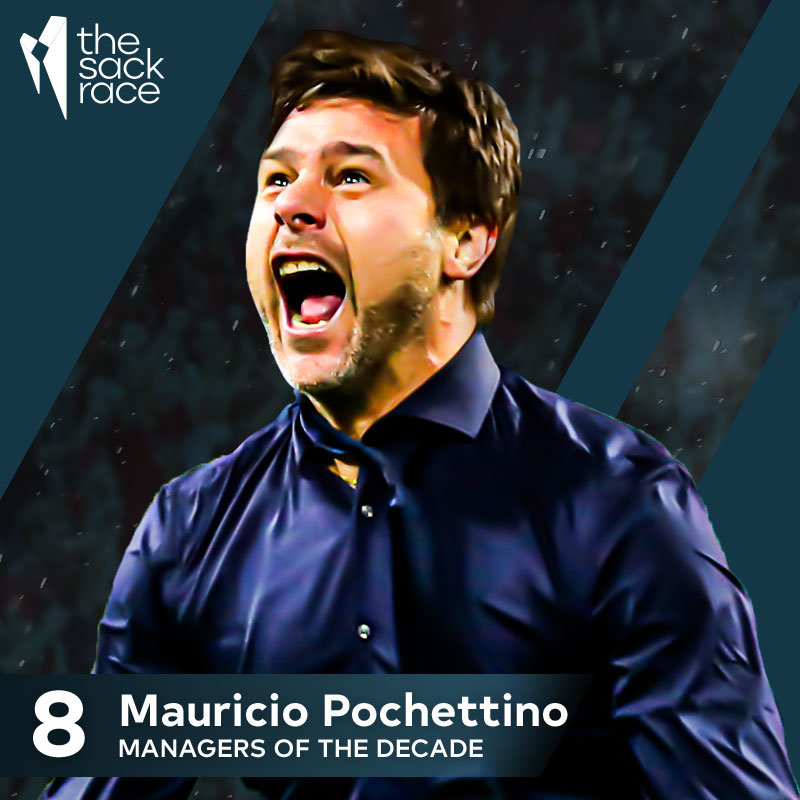 It’s fair to say that Pochettino’s first season at Spurs was one of transition. The capital club missed out on a top-4 finish, were booted out of the FA Cup at the fourth round stage, and exited the Europa League in the last-32. They did reach the League Cup final, where they were defeated by rivals Chelsea, but perhaps the most pivotal factor of the campaign was the breakthrough of Harry Kane who bagged 31 goals in 51 games across all competitions - under Pochettino he's since transformed into one of the best strikers on the planet.

Over the course of the subsequent four seasons Pochettino has elevated himself into the top-bracket of managers, worldwide. Prior to his arrival Spurs had only previously registered two top-four finishes in the Premier League era, under Pochettino they cemented a place in the top-four in each of the last four campaigns, and even mounted a couple of title challenges.

Pochettino led Tottenham to their best-ever Premier League finish, 2nd, and in the process accumulated their highest-points tally, 86. He also boasts the best points-per-game ratio of any Tottenham boss in Premier League history (over 25 games): 1.89.

Pochettino cancelled St Totteringham's Day after 22 years, conjured up a first Premier League win at Chelsea, and a first home league win over Man Utd in 15 years, and of course that memorable journey through to the Champions League final, including that goosebumps moment in the sensational semi-final comeback.

The above facts and figures are all very impressive, however the area where Pochettino has really stood out has been the modification of Tottenham’s DNA. No longer does “lads, it’s Tottenham” apply, with Pochettino changing the club’s culture, mindset and mentality, making them more street-smart, confident and resilient. He’s opened new doors, and built a star-studded team with England players at the core.

Speaking of which, back in October 2017 when Harry Winks made his national team bow against Lithuania, a superb statistic was unearthed: Winks was the 15th player out of the last 30 Three Lions debutants, that had been managed by Pochettino.

While his managerial rivals splashed the cash willy-nilly, Pochettino often had to operate on a much smaller budget. Dele Alli cost all of £5m, there was Eric Dier (£4.5m), Kieran Trippier (£4m) and Toby Alderweireld (£14m), then when Daniel Levy did loosen the purse strings Heung-Min Son was snapped up for £26m, and Moussa Sissoko for £30m. Pochettino even went 18 months without making a single signing, during which he led Spurs to the Champions League Final, two domestic semi-finals, and two top-four finishes.

Pochettino never lifted silverware with the club, something that deep down may always haunt him. It’s true that Tottenham, domestically at least, faltered towards the end of his tenure and while his sacking was still a shock, a fresh challenge was needed for both club and manager. However, there’s no debating that Pochettino will go down as one of the great Tottenham managers, and if some people get their way he could soon be back in English football with a certain underperforming Manchester club...