Liverpool began 2010 by suffering an FA Cup third round upset at the hands of Championship strugglers Reading in what was ultimately a thoroughly mediocre season. Fast-forward 10 years and the Reds enter into 2020 as European and World champions who, bar an absolute disaster, are en route to ending their titanic 30-year pursuit of their 19th top-flight title, and first in the Premier League era.

While The Sack Race's Top-10 'Managers of the Decade' focuses on the achievements of managers within English football, it’s impossible not to take into account Klopp’s wider accomplishments at Liverpool, such as becoming the first manager to lead an English side to the ‘International Treble’ of the UEFA Champions League, UEFA Super Cup and FIFA Club World Cup.

If the decade was extended by six months, Klopp may have made it into the top-four on our list, but while it almost seems inevitable that the title is heading back to Anfield, unfortunately it’s not been lifted in the current decade. However, if it’s any consolation to Klopp he does finish 2019 as arguably the best boss on the planet - a statement few could argue with.

Like all great managers Klopp has an aura about him. No manager has made a bigger impact at Liverpool since the legendary Bill Shankly. Many have influenced the club in one way or another, but Klopp is unquestionably Liverpool’s superstar manager of the Premier League era.

Appointed in October 2015, Klopp arrived at a club reeling from the disappointment of the previous season in which Brendan Rodgers’ men had finished 25 points adrift of winners Chelsea.

Klopp, who modestly called himself 'The Normal One', swiftly melted Merseyside hearts with his infectious personality, charisma, and superstar smile. In truth, he inherited a pretty average squad yet still managed to oversee two major finals in his first season: a League Cup loss to Man City, and Europa League defeat to Sevilla. 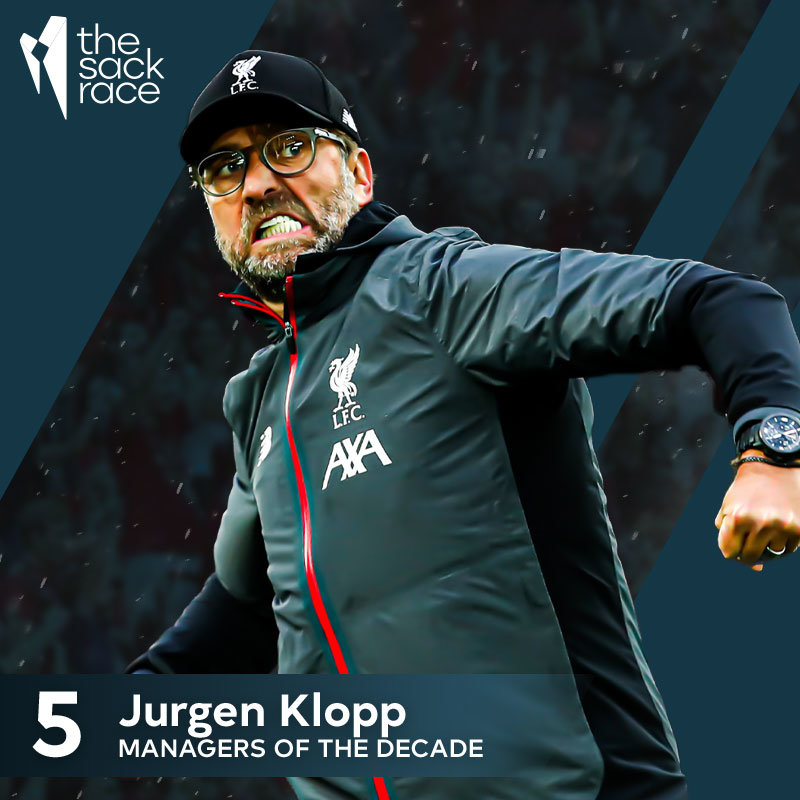 Over the course of the subsequent three-and-a-half-years Klopp has overseen a period of transition during which he’s tinkered with formations, style and personnel. At first, the German gaffer implemented a version of his famous ‘Gegenpressing’ as he moulded Liverpool into an intense, high-octane pressing outfit, however a few ingredients were still missing.

Through a combination of his coaching philosophy, tactical astuteness and high-quality recruitment, Klopp evolved Liverpool into a slick, ruthless, well-oiled juggernaut with buckets of swagger backed up with substance and solidity. They may not have secured the league title - yet - but the German has propelled the club into the elite bracket once more.

The squad is now jam-packed with world class talent and quality. Allison’s been a priceless addition in between the sticks. The previously porous backline is martialled by the best defender on the planet, Virgil Van Dijk, who is often partnered with Joel Matip - remarkably, a free transfer. Two absolute machines patrol each flank in Andy Robertson and Trent Alexander-Arnold who excel in both the defensive and attacking aspects of the game.

In attack, Klopp signed Sadio Mane and Mo Salah who together with Roberto Firmino have formed one of the most fearsome triumvirates in football. Meanwhile, the midfield contains the heart and workrate of Jordan Henderson and the driving force of Fabinho, complemented by  the dynamism and mobility of the likes of Naby Keita and Georginio Wijnaldum.

Over the last four years there have been a raft of memorable matches, from European nights at Anfield such as that 4-0 comeback against Barcelona and the dramatic 4-3 triumph over Klopp’s former employers Borussia Dortmund, to thrilling Premier League victories like the 5-4 win at Norwich and the 4-3 success over Man City among many, many others.

As the decade draws to a close, Liverpool are a whopping 13 points clear at the summit of the Premier League, having accumulated a record 52 points from a possible 54 on offer. In fact, the Reds have conjured up a brilliant 35 game undefeated run in the league, and haven’t suffered a single top-flight loss since their opening game of the year. Anfield has transformed into an absolute fortress, and one that hasn’t witnessed a home reverse since April 2017, while it’s occupants have taken maximum points from their last 16 matches on their own patch.

It’s also worth noting that only Pep Guardiola and Sir Alex Ferguson - who bagged four titles between them this decade - accumulated more points-per-game than Klopp (2.148) between 2010 and 2019.

In the last six months Liverpool have conquered both Europe and the World, which has resulted in Klopp being named the Best FIFA Men's Coach of 2019 - within the next six months Klopp’s men could tick off the final box by winning that elusive Premier League title.