England's team at the 2022 World Cup according to the bookies

The Premier League has been anything but predictable this season and this is ultimately down to the quality the competition has been showing so far. From teams like West Ham sailing up to third place, to Arsenal currently on a ten-game unbeaten run heading into the international break, there’s been class oozing from some of the youngsters in these teams who are certainly looking to threaten for an England position to travel to the World Cup in Qatar at the tail end of 2022.

Below we’ve taken a look at who is the most likely player to start in each position on the pitch according to the bookmakers, and also where some value might lie for a few of the outsiders. 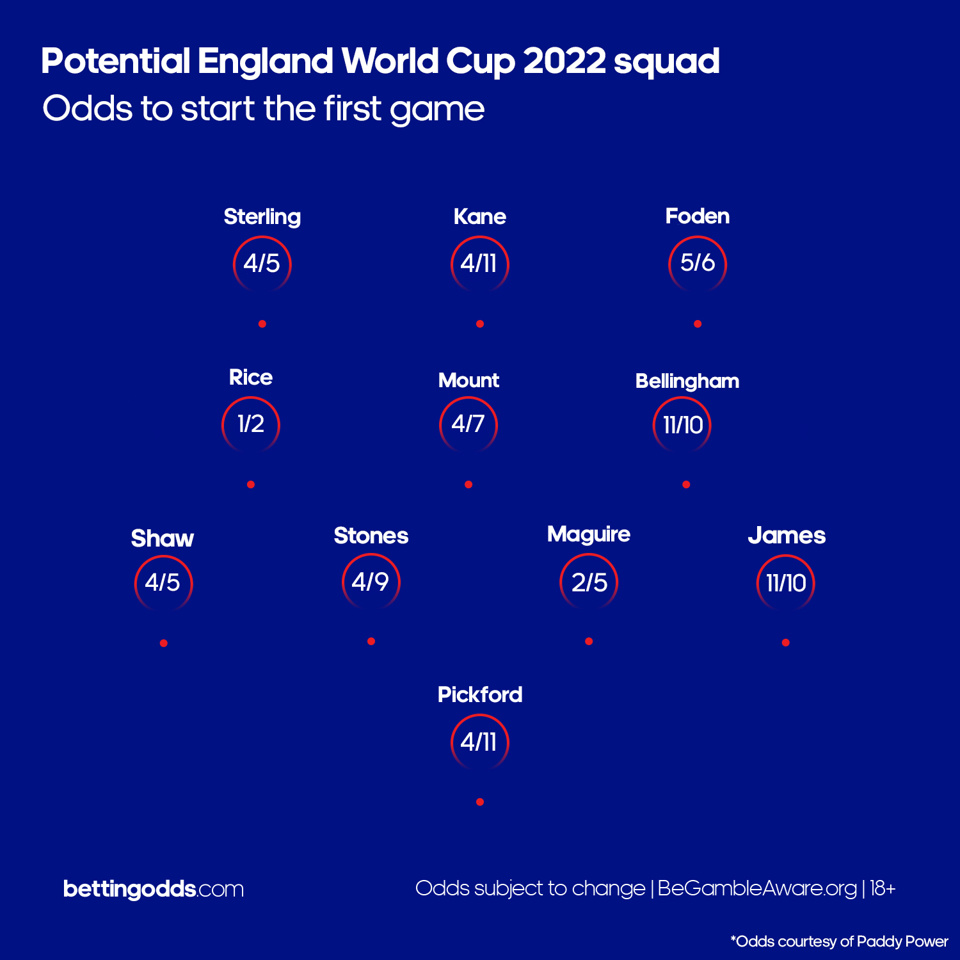 Despite an incredibly shaky start to the season, Manchester United captain Harry Maguire finds himself as the most likely defender to start for England at the World Cup at 2/5, with his cross-town rival John Stones just behind him at 4/9.

Maguire has been a key man for the England international team since the 2018 World Cup where he had his breakout campaign with the Three Lions. While at club level he’s certainly struggled skippering the Red Devils, his performance at Euro 2020 didn’t go unnoticed as he featured in the team of the tournament alongside the likes of eventual champions Leonardos Bonucci and Spinazzola.

Ben Chilwell is a man who has impressed many this season alongside many of his Chelsea teammates. The full-back is proving he is one of the best in his position in the league and has managed to register four goals this season - one of them being for England against Andorra. It might come as a surprise to see him as a 7/4 shot to start the first game and Luke Shaw being the odds-on option at left-back.

Like his club captain Maguire, Shaw is another player who has come back from the Euros and struggled to find some form. ‘Shawberto Carlos’, as many were calling him during that tournament, showed everyone just what he is capable of on the international stage, performing to an acceptable level every game and many even had him down as one of the best players for England in their run to the final.

One last player to mention is Trent Alexander-Arnold, who may not be Southgate’s most favoured option but is having an excellent start to the season with Liverpool. ‘TAA’ was unlucky to not make the Euro 2020 squad but is quickly proving that he deserves to be on the plane next year based on his current club form. The Liverpool full-back has already registered seven assists in 12 games this season and has even found himself on the scoresheet with a beauty of a free-kick against West Ham. Many regard Trent as one of the best right-backs in the world, never mind in the England squad, but with the man in charge not favouring him so much, the bookies are offering 10/3 for him to start England’s first game at the World Cup.

England have got an abundance of defensive options and even the likes of Chelsea’s left-back (and current top scorer) Reece James (11/10) will be considered by Southgate. The market for these spots is well and truly open so it’s best to just list a few of the outsiders for selection for that first game in Qatar.

After an absolutely stunning start to the season with West Ham, Declan Rice finds himself as the most likely midfielder to start the first game for England at 1/2, closely followed by Chelsea’s Mason Mount at 4/7.

The Hammers currently sit in third in the Premier League table and their midfield maestro has been one of the stand-out players for them so far, with the stats certainly showing how good he has been. The 22-year-old currently ranks first in the Premier League for blocks, interceptions, passing accuracy, possession won, successful passes and tackles won. Southgate has certainly been a fan of the midfielder, starting him in the Euro 2020 final and in three of the five games England have played since then. It might be a while to wait, but 1/2 for that Rice pudding in the England midfield could definitely prove to be decent value.

Jude Bellingham and Kalvin Philips are barely separated in the market for the elusive third spot in the midfield, with the former slightly more favoured at 11/10 with Phillips at 6/5. Borussia Dortmund’s Bellingham only racked up 55 minutes of playing time at Euro 2020 whereas the Leeds midfielder started every game in the major competition. Considering Southgate’s love for Kalvin, plus his individual record for England, you’d have thought to see him more favoured in the betting but Leeds haven’t started so well in the Premier League and Jude Bellingham has been involved in 10 goals in 18 games for Dortmund this season. There’s a long way to go until the World Cup but if Jude keeps on performing he could definitely be in with a shout.

Elsewhere in the market is Emile Smith-Rowe who has been playing some incredible football with Arsenal of late. He currently is represented by a price of 5/1 to start England’s first game at the World Cup and he’ll be hard for Southgate to ignore if he keeps up this form for the Gunners. The youngster is yet to make an appearance for England but has featured in several under-21 games, scoring in his last appearance. Thanks to a late withdrawal from Marcus Rashford, the Arsenal midfielder now has a space in the England squad for the November internationals and, as a result, odds have actually halved from 4/1 to 2/1 for Smith-Rowe to make the World Cup squad. To see him at 5/1 to start the first game is an encouraging sign for the youngster, as well as the punter.

It might not be the start that Harry Kane was looking for but that hasn’t put off punters backing the Spurs striker to start England’s first game of the World Cup. At odds of 4/11, the England captain is the joint-shortest of all the players to start at the World Cup despite his quiet start to his Premier League campaign. Though he has a solitary goal on his Tottenham top tier tally for 2021/22, Kane’s England numbers are nothing short of spectacular, with the 28-year-old registering 41 goals in 65 games for country, having started nearly every England game for the past four years. Current league form would suggest other forwards may be better but, in an England shirt, Harry Kane is untouchable and that price seems fair.

Away from the Premier League, Tammy Abraham had been enjoying his time in Italy under José Mourinho at Roma. The ex-Chelsea player has been involved in five goals in 12 games in the Serie A and whilst they might not sound like the most impressive numbers, many have been impressed with his Didier Drogba-esque striker style for the Giallorossi. Abraham has been rewarded with an England call up for the upcoming World Cup Qualifiers, which makes the 16/1 price for him to start the first game of the World Cup all the more attractive.

Ultimately, however, it has been a quiet start to the season for a substantial number of England forwards, which means that the market is wide open for a starting berth, and all the more attractive:

Thankfully there’s plenty of time left of the season and plenty of time until the 2022 World Cup so any of the players in that list can be in with a shout.

To make the squad

Away from the starting XI odds, we’re going to take a brief look at the odds just to make the squad. And how the market has changed since the start of the season for some players.

In defence, we’ve got the usual suspects at some incredibly short odds. Harry Maguire and John Stones both share the same odds of 1/20 to make the World Cup squad, Ben Chilwell and Luke Shaw are priced at 1/16 and 1/12 to be the options at left-back and Kyle Walker and Trent Alexander-Arnold come in at 1/8 and 1/3 to take the right-back spots with Reece James just a bit less likely at 4/11.

One player who has had his odds backed in this season is Ben White who saw himself as an even-money shot to make the World Cup squad to a now 1/3 punt after a solid start to life at Arsenal. With Arsenal’s new signing looking like he’s in the squad it means one person is going to have to miss out and it looks like Tyrone Mings could be the unlucky loser in this situation. We all know Southgate is a big fan of the left-footed centre half but the bookmakers have now priced him at 6/4 to make the squad meaning he’s only been given a 40% chance to make the squad next year.

When it comes to the forwards there are not many surprises when it comes to the odds. However, Raheem Sterling is 1/20 to make the squad whereas Harry Kane is 1/16, it seems the bookmakers think they’re both going but the Manchester City winger is the more certain option according to the bookies! Mason Greenwood is the new man the bookmakers think is going to make the squad. Last year the Manchester United sensation was named in the preliminary squad by Gareth Southgate, he was then forced to withdraw due to an injury. He’s currently priced at 1/2 to make the World Cup squad which is a big change from the last competition where he was 7/1 to make the Euro 2020 squad in January.