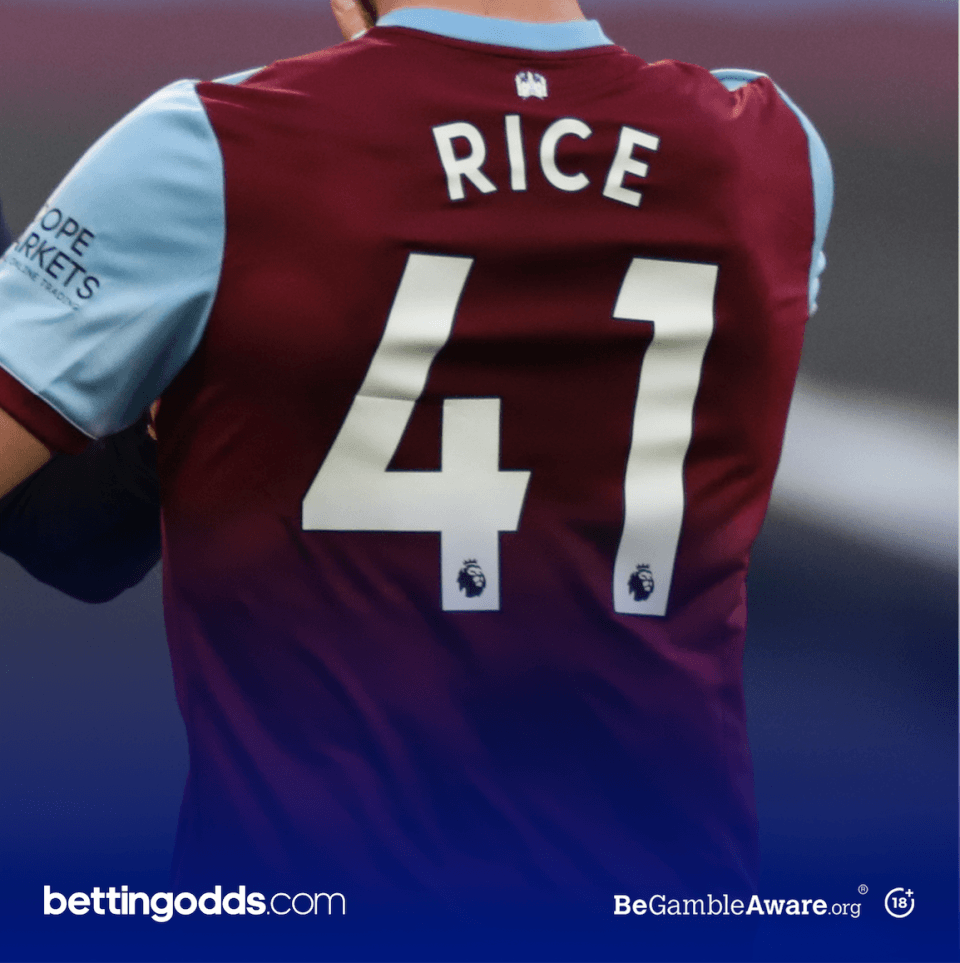 West Ham’s Declan Rice has been one of the standout performers so far in the Premier League this season. The dynamic midfielder played a key role in England’s success at last summer’s European Championships and has developed into one of the most talented players in world football.

The 22-year-old has seen his stock rise significantly over the last few years and with potential interest from some of the Premier League big hitters we’ve taken a look at the odds for Declan Rice’s next permanent club. The prices quoted below are with Sky Bet and we’ve also included some of the key stats from Rice’s campaign which show how effective he has been this term.

At the head of the betting for Declan Rice’s club are Chelsea priced at 5/4, which implies a 44.4% chance of the midfielder making the switch across London. Rice was born in Kingston upon Thames and spent the majority of his youth career with the Blues so already has links with the club and with Roman Abramovich not frightened to open that warchest, we can see why they are favourites.

Next in the market we have Manchester United, who can be backed at 7/4 to be the club to capture the signature of Rice. United look as though they need to invest in their midfield with some fans believing that Scott McTominay and Fred are not up to the standard of their rivals in this area. With players such as Cristiano Ronaldo and Raphael Varane coming into the club last summer it would be no surprise to see them try and bolster their options in the centre of the pitch at the end of this season.

With the riches that Manchester City possess it feels like they are linked with every big potential transfer in world football and they once again make the list here, priced at 6/1. With Fernandinho now at the back of his career aged 36, it’s likely that this will be his last season at the club as a player and with Rice having plenty of Premier League experience, they may look to fill the gap the Brazilian leaves with the transfer of the talented West Ham man.

Priced at 12/1 are Jurgen Klopp’s Liverpool who already have numerous options in midfield including Fabinho, Naby Keita, Curtis Jones and Jordan Henderson. With West Ham thought to be wanting around an eye-watering £100m for the Rice we cannot personally see Liverpool splashing the cash and going all out for the midfielder.

Rounding off the betting are Arsenal, who after losing their first three league matches of the season have now put together a run of eight unbeaten. It’s thought that if Rice does make the switch to a Premier League club, he will want the guarantee of Champions League football and even if the Gunners do make the top-four this season (10/3 to do so), we still struggle to see this transfer coming to fruition.

West Ham currently find themselves in third position in the league with Rice being pivotal in their advance up the table over the last 18 months. Rice has upped his output in the final-third this term and already has played a direct hand in more goals than the likes of Jack Grealish (3), Romelu Lukaku (3) and Harry Kane (2) this season. Even more impressively the midfielder ranks first in all of the following metrics for the entire division this season.

Declan Rice in the Premier League this season

With West Ham flying high at the moment and currently occupying one of the Champions League places, Rice may be in no rush to leave the Hammers and it will be interesting to see just how far they can go next season.

If you are having a bet, please do so responsibly.

Presenting your @SkyeCloudLTD Goal of the Month for October... https://t.co/v4prBa2znZ

Zenit vs Chelsea Odds: Lukaku to fire Chelsea to top of Group H

Zenit vs Chelsea Odds as BettingOdds.com provide their Betting Tips for the Champions League match on Wednesday…