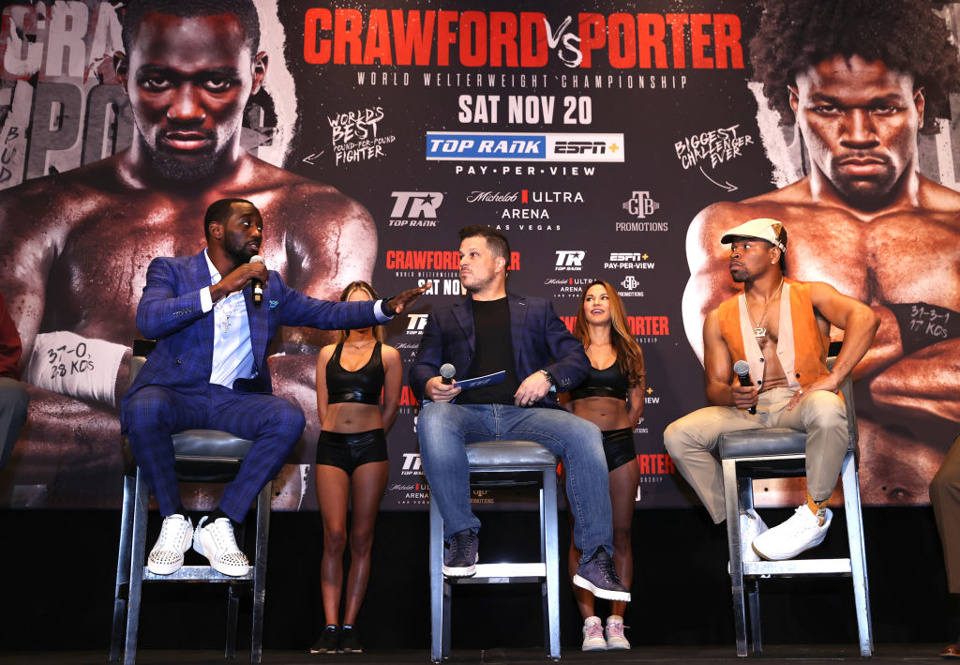 When will the fight start and where is it being broadcast?

The action will be screened live on Sky Sports Main Event in the UK. Undercard fights will start around midnight and the two contenders for the main event should ring walk at around 4am UK time. However, Las Vegas being Las Vegas, this could be anytime an hour either side so be prepared.

Who will win the fight?

Shawn Porter is a decent boxer. I should know! Little did I realise when watching ringside as Englishman Kell Brook defeated him in a hotly disputed decision at the Stub Hub Centre in Carson, California, way back in 2014(see below around 1 minute mark), that I would seven years later be writing an article on him fighting for the World Title again vs a potential all time great.

Porter has seen ups and downs throughout his career including winning a Welterweight strap twice - First, the IBF title against Devon Alexander and secondly, the WBC vs Danny Garcia.  The lows though have seen him lose three times when stepping up against arguably more skilled boxers, first Brook, then 'One-Time' Keith Thurman and then losing to Crawford's nemesis Errol Spence Jr.

If we are talking about skilled boxers then we have one of the best ever proponents of that in Bud Crawford. This slick, rangy, elusive Southpaw is a nightmare to face. He's accumulated a perfect 37-0 record over his thirteen year career to date and is rightly thought of as one of the very best boxers in the world. The world renowned Ring Magazine has him listed at number four in their notorious P4P rankings and it's for all these reasons that Crawford will be a very heavy favourite in the betting. He's generally hovering around the 1/7 mark with Porter 5/1 and the draw way out at 22/1.

This market is the one that will be hotly disputed. Most people agree that Crawford wins fairly comfortably, but how? The bookies have a Crawford decision at the head of the market and it's generally available around 5/6. Bud to win by KO/TKO is 6/4 and it's this selection I'm going to be getting stuck into.

Shawn Porter is extremely durable, let's make no mistake. He's only been down twice in 35 fights - both flash knockdowns and has never been stopped, even though he's been in with some exceptional boxers.

However, this is Terence Crawford we are talking about. He's undefeated in 37 bouts and has won 28 of them by KO. He's not had a points victory on his record since a unanimous decision vs Ukrainian Viktor Postol back in 2016 and has turned into a ruthless finisher.

I can see the referee stopping this one late in the contest due to Shawn Porter not being able to defend himself or being caught clean. Either way I don't see it going the full 12 round distance.

Single round betting is notoriously hard to pick so I'd instead be looking at the Grouped Round Betting market. Terence Crawford to win in the championship rounds of 9-12 looks a solid selection. Currently 11/2 at Paddy Power/Betfair.

As mentioned above this is really the big question of the fight. The fight to go the full twelve rounds is currently best priced 4/6(William Hill) and for there to be a stoppage is as big as 11/8 at Betfred.  I'd be tempted to go for the stoppage for all the reasons listed previously. Crawford is a beast of a man at Welterweight. He cleared up Junior Welterwight and I fancy him to do the same at Welter should Errol Spence ever get in the ring with him. I can see Shawn Porter putting up a spirited fight for the first half of the fight before Crawford's class shines through.