Coventry vs. Wrexham Betting tips: Can the Welsh side book their FA Cup fourth round ticket? 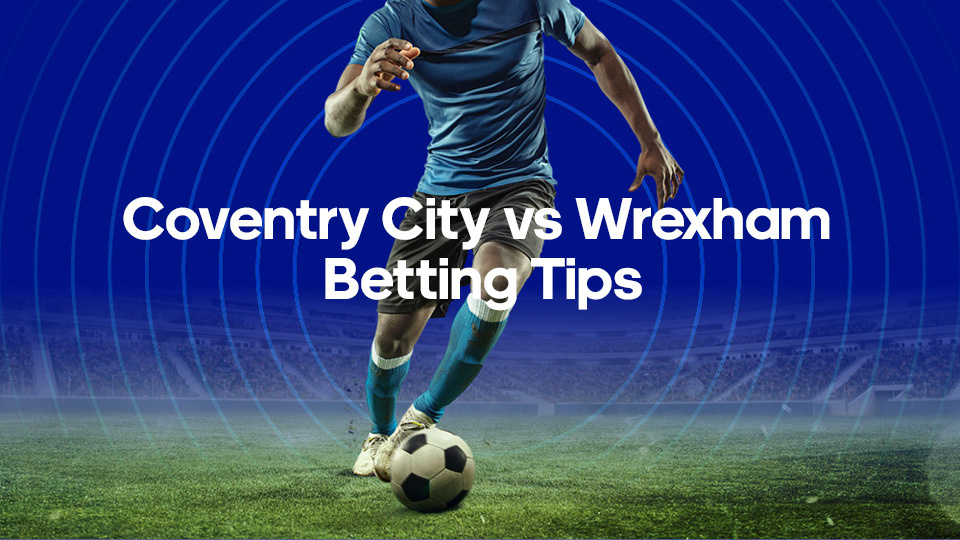 Two tips for Coventry vs Wrexham in the FA Cup third round on Saturday
By Michael Bates
14:56 Friday 6th January 2023 - 4 minute read

The glory of the FA Cup steps up a gear as it hits the all-exciting third round. Coventry City welcome Wrexham AFC, the team purchased by TV star Rob McElhenney and his Canadian friend Ryan Reynolds, on Saturday evening.

Depending on the scoreline the game may feature in a future episode of their hit Disney Show 'Welcome to Wrexham', but if you want to watch the game live you will have to find S4C at 5.30pm and streamable via S4C on BBC iPlayer.

Bet £10 get £30 in Free Bets
get offer get offer
#AD New customers on mobile only. 7 days to claim and stake £10 minimum bet at odds of 1.5 or greater to qualify. Free, void, cashed out or partially cashed out bets do not qualify. Max 3x £10 free bets credited on bet settlement. Free bets must be used on 4 or more selections with selection odds of 1.3 or greater. Free bets are non-withdrawable, and stake not returned with winnings. 7 day expiry. 18+BeGambleAware.org. T&Cs apply.

Speak to a Coventry City fan and they will tell you of their glorious FA Cup-winning match against Spurs, but that was 36 years ago back in 1987.

Since then the side has not performed well in the tournament, the last time they reached the fifth round was in 2018 when they were knocked out by Brighton. They have lost to several smaller teams in recent years such as Worcester City (2014), Colchester United (2004), and most memorably Sutton United (1989).

Off the pitch, Coventry City is a club that can't do anything right, with botched takeovers, being forced to play at Birmingham and Northampton, and a one-off Carabao Cup game at Burton when they should have been at the CBS Arena.

On the pitch, manager Mark Robins has worked wonders with a small squad and has the second highest scorer (12 goals) in the Championship in his attack, the Swedish sensation with the unpronounceable surname: Viktor Gyokeres (Yok-ur-es).

Coventry sit 14th in the table but have only won 1 game from their last 5 (DWLDD) and rely on their star striker far too much with goals not coming often from the rest of the squad.

Phil Parkinson's Wrexham, on the other hand, are unbeaten in their last five (WWWWD), sit second in the Vanarama, and also have the second-highest scorer in the National League with Paul Mullin's 22-goal tally, as well as Ollie Palmer who has netted 12 goals with a 100% shot accuracy!

Robins may choose to rest Gyokeres following the packed Christmas/New Year fixture list as he has been picking up knocks during games, this may lead to the manager starting Fabio Tavares for the first time this season. The U21 player has featured in the squad for most of the season but has only come off the bench to play if so he will be most likely partnered with Martyn Waghorn, who has only scored once from the spot from his 12 appearances this season. However, whatever appearance Gyokeres plays in the game, there is a very good chance he will score.

Coventry will be without Callum O'Hare who has been sidelined with an ACL injury but expect to see Hamer collect his obligatory yellow card, the player has so far made 27 fouls and had 2 reds and 3 yellow cards this season.

The visitors have only the injury to Jordan Davies to contend with so will most likely put out their best available players in the hope of progressing in the tournament and appeasing their Hollywood masters. So expect Mullin to feature heavily in this encounter and get his name on the scoresheet.

With both teams boasting prolific goal scorers in their respective leagues, expect to see the keeper on each team having to pick the ball out of the back of the net with shots from these strikers.

Although Gyokeres may only feature for part of the game, his speed and determination to score in every game he plays may be too much for the Welsh team's defenders.

On the opposite side of the pitch, Coventry have leaked goals this season, mainly due to the long-term absence of veteran centre-back Kyle McFadzean and this will be the perfect time for Mullin to take advantage.

Coventry City have only won one of their last five league games and although they can score, their defence is currently prone to letting in goals on the counter-attack

Their recent game against Swansea saw the Sky Blues comfortably winning 3-0 only for the game to end 3-3. The last time Wrexham failed to get on the scoresheet was in their 0-0 fixture in November against Wealdstone

FA Cup Odds
Bet £10 & Get £30 In Free Bets
#AD 18+ New Customer offer. Place a min £10 bet on the Sportsbook on odds of min 1/2 (1.5), get £30 in Free Bets. Rewards valid for 30 days. SMS verification required. Only deposits via cards will qualify. T&Cs apply. Please Gamble Responsibly.
Bet £20 & Get It Back As Cash If It Loses
#AD New customers only. Place your FIRST bet on any market at odds of min 2.0 (EVS) and if it loses we will refund your stake in CASH. Max refund for this offer is £20. Only deposits made using cards will qualify for this promotion. T&Cs apply, 18+ begambleaware.org
Bet £25 get £50 In Bonuses
#AD Place a qualifying £25 fixed odds bet at odds of 1/2 or greater and get £50 in bonuses 5 x £5 free fixed odds bets, 4 x free £5 spread bets + 50 free spins on Starburst. Qualifying bet cannot be placed in-play or cashed out early. T&Cs Apply. 18+ begambleaware.org
Bet £10 Get £40 in Bonuses
#AD New 18+ UK customers only. Register using the promo code WELCOME40, deposit and place first bet of £10+ on Sports (cumulative Evens+) within 7 days of registration. First bet must be on Sports. £30 in Free Bets and £10 in Free Spins (50x20p) credited within 10 hours of bet settlement. Free Bet stakes are not included in any returns. Bonuses have a 7-day expiry. Payment restrictions apply. SMS verification and/or Proof of I.D and address may be required. Full T&Cs apply.
Football Tips