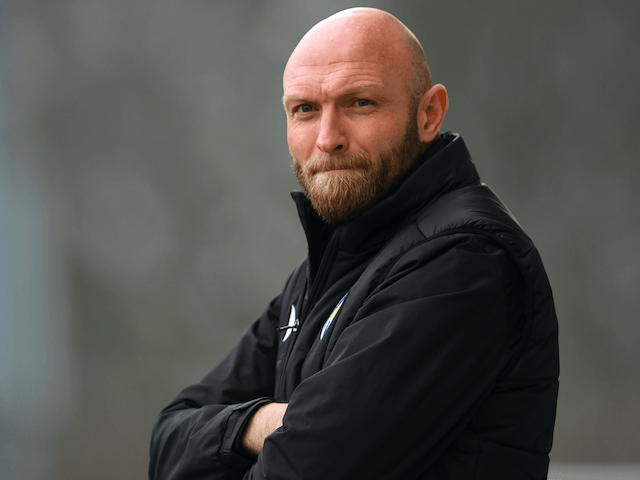 Colchester United have sacked Hayden Mullins and named Wayne Brown as interim head coach in a bid to stop their slide and avoid the drop out of the Football League.

The club’s decision comes after a five game losing streak which leaves the League Two club one place and three points above the relegation zone, while they’re without a win since November.

Following the recent poor run of results, the difficult decision has been made to make a change and relieve Hayden Mullins and Alex Dyer of their respective roles at Colchester United.

I want to make it clear that the responsibility for our current league position lies with everyone involved, both on and off the pitch, and I include myself in that. Everyone remaining must shoulder some of that responsibility individually and collectively.

I’d like to thank Hayden for ensuring our survival last season, and thank both he and Alex for their hard work this season – and I wish them the best of luck in the future.

Since I made this difficult decision on Tuesday night, I have asked Wayne Brown to take charge as the Interim Head Coach and he has agreed.

Back in September 2020 Mullins left Watford to become assistant manager to Steve Ball at the U’s. Ball was then sacked in February 2021 after a run of 13 games without a win. So Colchester turned to their former promotion winning player Brown - then boss of Maldon and Tiptree - who was placed in temporary charge.

However, the following month the club switched managers yet again. Brown, who won one of his nine games, was replaced by Mullins through to the end of the season. "I can't allow those poor results to eat away at the team's confidence to beat the drop, which despite our position remains high," the chairman said after making the decision.

Mullins, with the help of advisor Paul Tisdale, kept the club in League Two after accumulating 12 points from eight games which bagged him the permanent job in the summer.

But, since an impressive 3-1 win over Exeter in November, Mullins has failed to register a win; picking up just two points from a possible 21, while the club are without a victory on the road since September.

Whether Colchester repeat the feat of last season and make yet another managerial change, only time will tell. But for now Brown, who will be assisted by Dave Huzzey and former U's boss Joe Dunne, will hope he can make more of an impact than last time out, starting with a positive result away to Salford this weekend.

Colchester are priced at 2/5 to stay up and 5/2 to be relegated. Scunthorpe have been handed odds of 2/5 to go down, and Oldham 8/15. Elsewhere, Tisdale’s Stevenage can be backed at 6/1 to lose their League Two status, Carlisle are 15/2, while Barrow are 10/1.