Championship final day permutations; there is still everything to play for in the second-tier 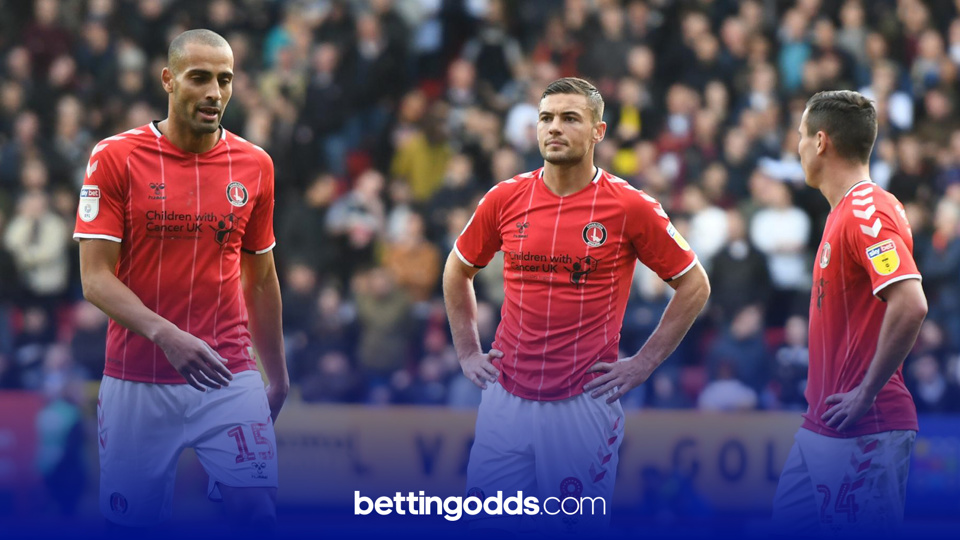 This is certainly the craziest end to a Championship campaign in recent history
By Callum Pragnell
17:05 Tuesday 21st July 2020 - 5 minute read

It’s the final day of the Championship season this Wednesday, and while Leeds United may have claimed the trophy at the top of the division, the Whites’ promotion to the top-flight is currently the only nailed on certainty in a league which could still go a number of ways depending on how the final round of fixtures pan out.

Here, we dissect the various different permutations and assess which clubs are still in contention to go up, and which could face relegation to League One.

With Leeds now confirmed as members of the 2020-21 Premier League, the battle for the second automatic promotion spot is being fiercely contested between three teams - West Brom in second, Brentford in third and Fulham in fourth.

West Brom are still in the driving seat and if they beat QPR - who have nothing to play for - at the Hawthorns in their final game then they will be promoted, regardless of results elsewhere.

However, if they fail to beat QPR and Brentford beat relegation-threatened Barnsley in their final match then it will be the Bees who join Leeds in the top-flight next season.

If Brentford draw with Barnsley and West Brom lose to QPR, then Brentford will be promoted thanks to a far superior goal difference, but if they both draw then it’ll be the Baggies who go up automatically by a single point.

The only way that Fulham can obtain automatic promotion is if they beat Wigan, Brentford drop points against Barnsley and West Brom lose, which seems highly unlikely. 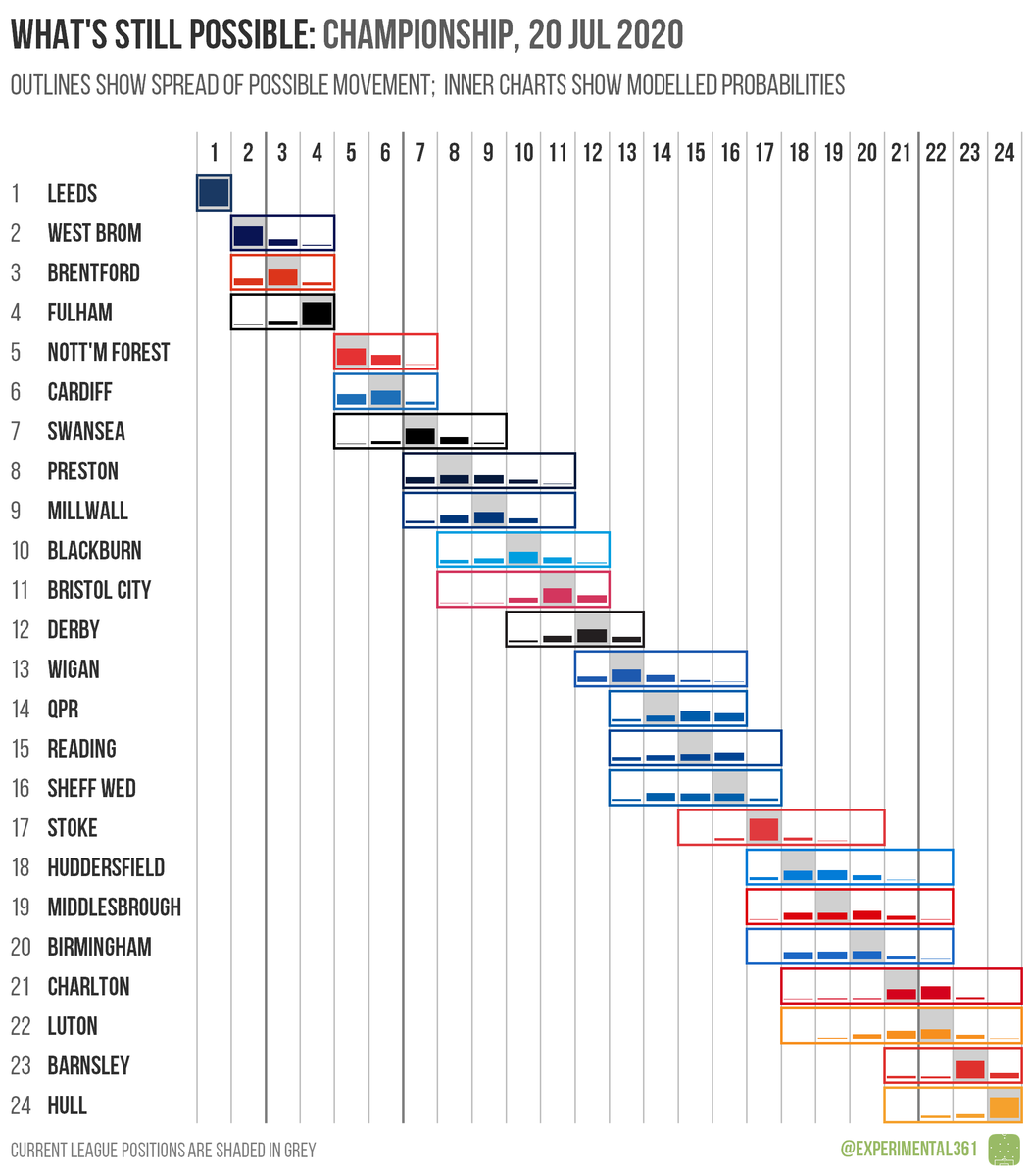 Just one round of Championship games left, but still plenty to settle at both ends of the table. https://t.co/tGAUj9sDET

With Fulham’s hopes of automatic promotion looking slim, it’s most likely that the Cottagers will have to settle for a spot in the play-offs.

Indeed, Scott Parker’s side (and either Brentford or West Brom) are the only teams completely guaranteed a spot in the top-six, with just three points separating fifth-place Nottingham Forest and seventh-place Swansea heading into the season’s finale.

The only way that Swansea can break into the top-six is if Welsh rivals Cardiff lose their final game and The Swans beat Reading away from home, or if Cardiff avoid defeat BUT Nottingham Forest lose their final game at home to Stoke by three goals or more, and Swansea win theirs by a three-goal margin, which again seems very unlikely but is still a slight possibility.

To recap, both Cardiff and Forest just need a draw to secure their play-off status but if Cardiff lose and Swansea win, Steve Cooper’s side will finish sixth and Cardiff will be faced with another season in the second-tier.

Here’s where it gets really interesting (and complicated). 24th-placed Hull are essentially already down, with their only realistic hopes of survival relying on a 12-point deduction being handed to Wigan for entering administration - something which still hangs firmly in the balance at this moment in time.

They could still stay up, but a footballing miracle will be required. Hull would have to record a massive win over play-off chasers Cardiff, hope Barnsley don’t beat Brentford, and Charlton and Luton would both have to lose by big margins for them to avoid relegation to the third-tier. It’s pretty safe to assume that they are down.

Assuming that Wigan are awarded their hefty points penalty next season instead of this one, and that the three sides relegated from the Championship are done so purely on footballing merit, the battle for the drop is realistically between Middlesbrough, Birmingham, Charlton, Luton and Barnsley.

The only way Barnsley can stay up is if they beat Brentford away from home (tall order), and results elsewhere work in their favour. If Charlton and Luton both record positive results, though, then the South Yorkshiremen are down.

Charlton face a tough trip to champions Leeds, but the fact that Marcelo Bielsa’s side have already won the division and will already be ‘on the beach’ could massively work in their favour and boost their chances of getting a result.

Luton, meanwhile, host a Blackburn side who also have nothing to play for so could well come out on top.

Middlesbrough in 19th and Birmingham in 20th could still mathematically go down if results work against them and they fail to register at least a point in their respective final matches against Sheffield Wednesday and Derby, while 18th-place Huddersfield have been saved by the skin of their teeth thanks to a superior goal difference, effectively rendering their final match against Millwall a dead rubber.

As briefly touched on earlier, there is still a lot of uncertainty surrounding points penalties for both Wigan and Sheffield Wednesday.

Any side who enter administration are awarded a significant 12-point deduction by the EFL, which would see the Latics drop into the bottom-three despite the fact that they are currently sat safely in 13th-place.

The EFL released a statement on Monday night, in it stating that Wigan would be awarded the aforementioned points deduction after their final game against Fulham on Wednesday evening.

"In the case of Wigan Athletic the 12-point sporting sanction, as a result of the club entering administration, will apply immediately following the end of the game against Fulham but is subject to appeal."

However, with Wigan set to appeal the decision it is likely that such a penalty will be imposed at the start of the 2020-21 season as opposed to now.

Sheffield Wednesday have been charged with financial misconduct relating to an accused breach of the EFL's profit and sustainability rules which, if found guilty, could see them deducted a maximum of 21 points.

Due to the length of the appeals process it is probable that, like Wigan, the Owls' points penalty would be applied next season - if at all - making them safe from the drop this week.

If it does come in affect for this term, though, it would mean that Sheffield Wednesday would be relegated to League One.

Due to all of the complications mentioned above, bookmakers are currently not offering any odds on Championship relegation betting.