Card-happy referees to look out for this season

The Premier League is back with a bang, and though the action remains behind-closed-doors due to the Covid crisis, a lack of atmosphere inside the stadiums is clearly not affecting the quality on the pitch with this weekend’s round of fixtures yielding a huge 44 goals!

The new season beginning brings with it an array of betting opportunities for us punters, with a number of you already landing ginormous bets - including this sensational 3975/1 Bet Builder double, won by a ballsy bet365 customer on Sunday.

If, like me, you’re still searching for your first win of the new campaign, it’s worth really doing your research before placing your upcoming wagers on the weekend’s Premier League action. BettingOdds.com’s sole purpose is to serve you with well-researched analysis on a wide range of different markets, and here I’m taking a deeper look into the world of cards.

Below, I’ve looked at the pool of referees in the top-flight and analysed their card stats from last season - and the start of this one - to determine which men in the middle are the most trigger-happy when it comes to whipping out the notepad.

The aim is to give us all a better understanding as to which ref’s are best to look out for when placing your Same Game Multis/Bet Builders, or simply when to back over or under a certain number of cards as a single in a particular match.

Last season’s most card-happy referee was Anthony Taylor, with the Manchester-born official brandishing a huge 122 yellows and 5 red cards in 32 appearances. Alongside Michael Oliver and Martin Atkinson, Taylor took charge of the most games in 2019-20, so naturally his figures were always going to be a little higher than the others.

However, compared to Oliver - who showed 105 yellows but interestingly not one red card during the whole campaign - and Atkinson, who did show five reds but just 94 yellows, it’s clear that Taylor possesses a lot less leniency when taking charge of games.

The people’s champion, Mike Dean, finished last season having shown the second-most yellows (112) alongside four red cards, though the fact that he officiated five fewer games than Taylor (27) is probably the only reason why he didn’t top the pile, no doubt much to his dismay. 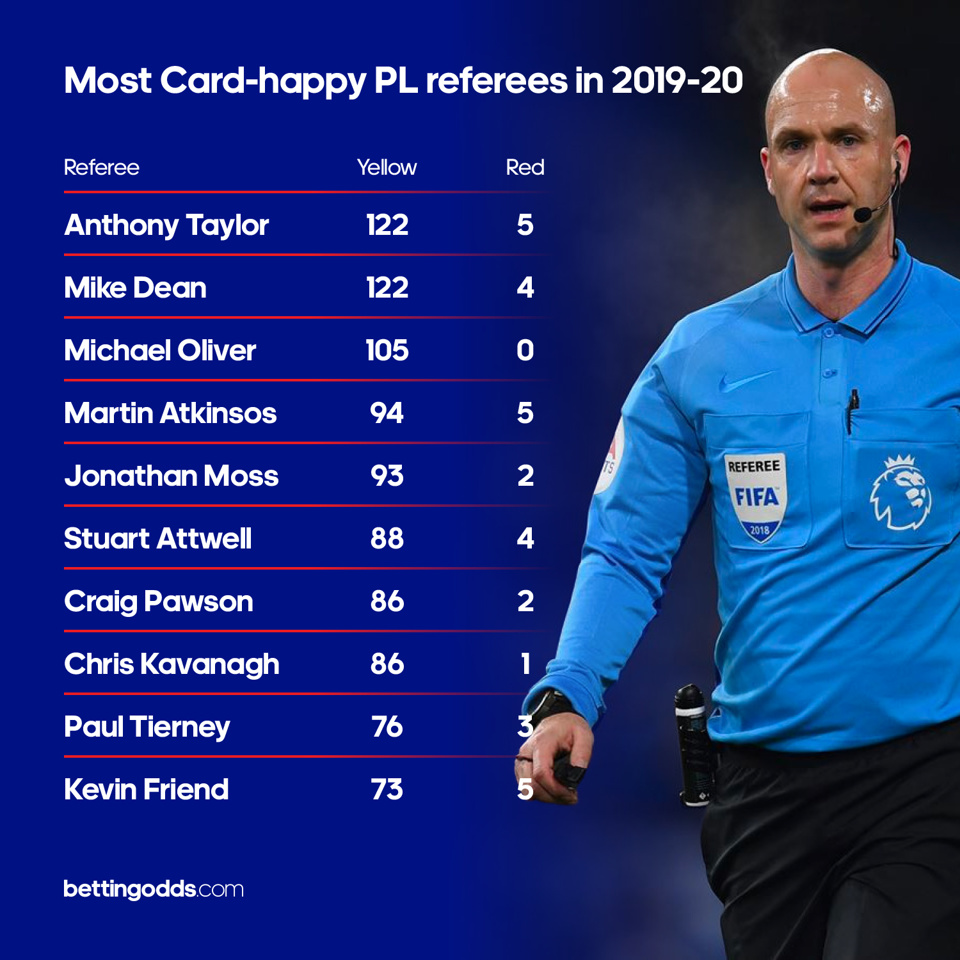 Dean has hit the ground running this season, though, already showing four yellows and one red card in his two appearances - Wolves’ 2-0 win over Sheffield United and Everton’s 5-2 win over West Brom - where he rightfully dismissed Kieran Gibbs after the full-back pushed James Rodriguez in the face during a bizarre act of stupidity at Goodison Park.

The Liverpudlian finds himself third in the standings for this season so far, however, behind David Coote, who has only taken charge of one match but showed a whopping seven yellow cards and awarded a penalty in it as tempers flared between Southampton and Tottenham on Sunday (four for Saints, three for Spurs).

Coote won’t be refereeing this weekend but is the man in charge of VAR for Leicester’s trip to Man City on Sunday, which could prove to be an interesting one.

Last season’s top card-distributor Anthony Taylor has so far shown five yellows in two appearances, but has interestingly already awarded four (!) penalties in those two games - two for Leicester against West Brom last weekend and one for each of Leeds and Fulham on Saturday.

Taylor will be swapping the whistle for the substitutes board this weekend, as he’ll be the fourth official when Liverpool and Arsenal lock horns in Monday evening’s standout tie at Anfield, but keep an eye out for him when he is next in action as it appears that he is once again displaying no signs of leniency on the pitch, just like last season. Backing over’s in the cards market seems the play when Taylor is involved.

Martin Atkinson is also worth keeping an eye on this weekend. The 49-year-old is fairly lenient when it comes to bookings, brandishing 94 yellow cards in 32 outings last season (avg. 2.93 per game), though was one of the highest ref’s when it came to sending players off in 2019-20 which is slightly peculiar.

Atkinson takes charge of West Ham v Wolves this weekend which, judging from the last two outings from both sides, should see very few cards. Wolves didn’t have a single player booked against City on Monday evening, with only Marcal making his way into the notepad in their season-opener against Sheffield United last week.

West Ham have only had one player booked in each of their first two Premier League games this term, with right-back Ryan Fredericks seeing yellow on both occasions, but aside from that have been one of the division’s most well behaved sides so far, so I would be inclined to back under 2.5 cards here - especially given the fact that Atkinson is in charge.

By contrast, Newcastle’s game against Tottenham should be packed full of cards if the first two weeks are anything to go off. Alongside Southampton, Newcastle are the Premier League’s highest offenders when it comes to bookings, picking up five in their opening two fixtures - three of which came in Saturday’s 3-0 defeat to Brighton.

Spurs also picked up three yellow cards in their feisty 5-2 win over Southampton on Sunday despite only receiving one caution during their season-opener against Everton last week, making the north Londoners one of the division’s most ill-disciplined sides early on.

Annoyingly for us, Mike Dean is only the fourth official for this clash and not the main referee, or else the cards really would have been raining down in N17.

Instead, Peter Bankes will take charge of proceedings which is still good news for the card punters out there, considering the first match the Merseyside native reffed he showed a straight red in - dismissing Wycombe’s Darius Charles against Blackburn Rovers on Saturday afternoon.

With Tottenham and Newcastle’s early disciplinary record considered, alongside the man in charge and the eagle-eyed Mike Dean watching closely from the sideline, I can sense plenty of cards in this Sunday’s showdown. Backing over 2.5 match cards seems a safe shout on the face of it, though the price may be too slim (odds not yet available) so including over 3.5 cards into your Same Game Multi this weekend would be my play for this one.