Bundesliga booking trends, did we see an increase on its return? 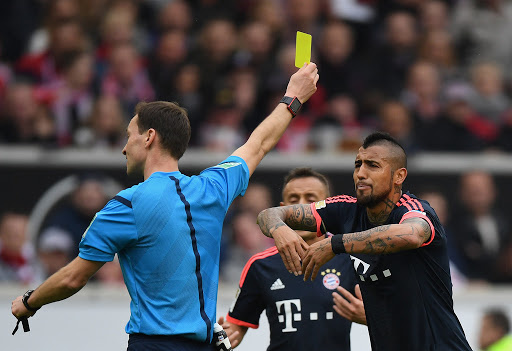 The Bundesliga returned this weekend and there were plenty of talking points to take from the three days worth of action.

Normal services seemingly resumed with Bayern Munich and Borussia Dortmund both coasting to victory against Union Berlin and Schalke respectively, while RB Leipzig dropped two crucial points at home to SC Freiburg, in turn slipping seven points behind leaders Bayern and down into fourth place below Borussia Monchengladbach after their win over Eintracht Frankfurt.

The return of the German top-flight saw the return of football bets, with punters across the country excitedly placing bet builders and same game multis on all of the action, many of which included player bookings.

This got us thinking, how did this week's round of fixtures compare to the others in terms of discipline; did we see an increase in cards due to player rustiness after such a prolonged break, or was there a more conserved approach taken by players and referees alike as football eased back into its return?

And it was all yellow

We may have all been expecting the latter considering matches were being played behind closed doors with no supporters in attendance to rile up the players and potentially sway the referee's decisions, but it wasn't the case at all.

In fact, this weekend's round of fixtures saw 39 yellow cards brandished, a 7% increase compared to gameweek 25 prior to the Bundesliga's postponement.

Bookings increased by a colossal 41% compared to gameweek 24, when only 23 yellow cards were shown across the board in the Bundesliga - the fewest out of any week in the German top-flight this season.

Of the 26 gameweek's completed so far, only five have seen more than 39 yellow cards brandished. gameweek 13 saw the most with 44 bookings shown, closely followed by gameweek 18 which yielded 43.

It is difficult to understand why, with refereeing leniency differing greatly each week, though it was clear just by watching the matches on TV that players were still adjusting to the speed of the game after such a prolonged period of rest and minimal training.

This weekend's most ill-disciplined side was Eintracht Frankfurt, a team who picked up five bookings during their disappointing 3-1 defeat at home to Borussia Monchengladbach.

Adolf Hütter's side committed almost double the amount of fouls as they did in their last game against Bayer Leverkusen on 7 March (19 compared to 12), while their fouls committed against against Union Berlin before that were drastically shorter (10).

There was also a 15.7% increase in overall fouls committed in the Bundesliga this weekend just gone compared to gameweek 25 (220 up from 190), thus further suggesting that the players were still getting used to the pace and intensity of the game after the break, which will likely take more than another week to fully get over.

In summary, if this weekend's findings are anything to go off, and players are still gradually getting back up to full match fitness, expect to see plenty of questionable tackles and subsequent bookings distributed this coming weekend.

Eintracht Frankfurt travel to league leaders Bayern Munich this weekend, who will dominate possession and potentially frustrate them at the Allianz Arena. This could therefore see an increase in bookings, especially considering the fact that Frankfurt picked up five yellow cards against Borussia Monchengladbach.

Be sure to check out our match previews for this weekend's Bundesliga games on our dedicated page to see all of our betting selections.