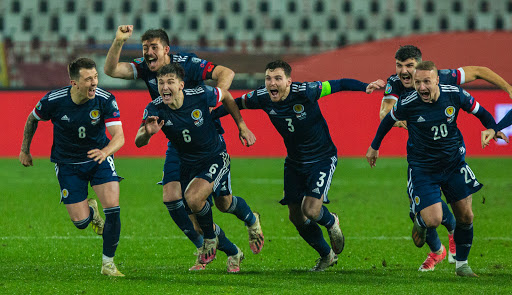 get offer get offer
#AD Bet £10 & Get £50 in Free Bets for new customers at bet365. Min deposit requirement. Free Bets are paid as Bet Credits and are available for use upon settlement of bets to value of qualifying deposit. Min odds, bet and payment method exclusions apply. Returns exclude Bet Credits stake. Time limits and T&Cs apply.
BTTS in Northern Ireland vs Kosovo, Scotland vs Republic of Ireland & Serbia vs Sweden
7/1
Odds correct as of 2022-09-23 16:15 Odds subject to change.

As the current Nations League group campaign draws to its natural conclusion, we've got this weekend's helping covered for all of your punting minds.

In addition to plenty of individual previews centred around matches in the competition, we've formed a 7/1 BTTS treble with bet365 focused solely on Saturday's offering. Got you intrigued? Then let's dive in...

Greece may already have this group wrapped up, but that doesn't mean there's any lack of competition still taking place. If results swing in a certain way over the next few days, then we could see any combination of Kosovo, Northern Ireland and Cyprus trading places.

In this one, the home side enter on a current two-game BTTS streak, meaning that half of their 2022 Nations League matches have now seen both teams notch.

It's a slightly lesser case in this department for the visitors, whose 3-2 victory over NI is their solitary experience of both teams finding the net in this year's Nations League.

Northern Ireland have scored half of their goals against Saturday's opposition, and with Kosovo having conceded as many as they've let in so far (5) we can see a repeat scoreline here.

Scotland vs Republic of Ireland - 7:45pm

Home nations side Scotland last thumped Ukraine midweek and will be keen to continue that momentum when ROI arrive at Hampden Park.

Ireland ran out as 3-0 winners in this particular fixture during match day two, which remains the only loss against Scotland's otherwise 100% Nations League record this term.

Their matches haven't featured many goals yet, but with Scotland having found their groove recently, coupled with the away team scoring three of their four goals against this opposition, we can envision both finding the net on Saturday night.

The Swedes' two encounters with frontrunners Norway have resulted in a success for BTTS backers, giving you a good indication of the quality they possess.

It's been the opposite for Serbia who've conceded in both fixtures with basement dwellers Slovenia, showcasing just how vulnerable they can be despite their league position.

Having scored seven and five and conceded four and six respectively, there isn't an awful lot to separate the two based on these metrics. And when we're taking into account the adage that "styles make fights" and logically applying it to football, these two should play out a narrow contest once more.