Betting Stories: Two of the most unlikely bets you'll ever see both landed this weekend 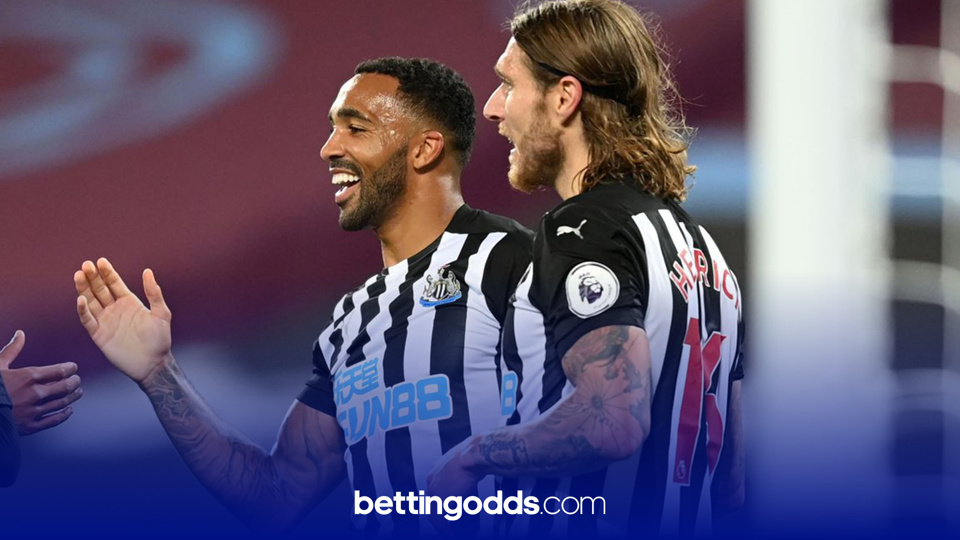 Football betting never ceases to amaze us here at BettingOdds.com. Each week there seems to be more and more obscure longshots landing and it is fantastic to see! This week, in Gameweek 10 in the Premier League, we were treated to two absolute corkers.

The first came on Friday evening as Crystal Palace hosted Newcastle. With the last SEVEN meetings between these two ending in an under 1.5 goals scoreline, we weren't expecting fireworks in south London. The game unfolded as we all planned, too, with no goals scored as the final whistle drew ever closer.

That was before leading goalscorer Callum Wilson found the back of the net having been assisted by strike-partner Joelinton in the 88th minute, before the England international turned provider just two minutes later, setting up his Brazilian strike partner for him to prod home a fortuitous effort and make it 2-0 to the visitors.

Somewhat unbelievably, one punter had £2 on Sky Bet's 'Return the Favour' special, which was Joelinton to assist a Wilson goal and vice versa - priced at just 80/1 by the Leeds-based bookie! Considering Joelinton has scored and assisted just three Premier League goals since signing for the Magpies in 2019 - none of which had fallen this season prior to Friday evening's game - and Wilson had just one assist to his name before the match, it is quite astonishing just how short this bet actually was.

To put things into context, when Sky Bet first started doing this special it was between Tottenham's dynamic duo Harry Kane and Son Heung-min - the most lethal partnership in the top-flight this season - and the bet was priced at 66/1, although it has now unsurprisingly shortened due to the pair landing one inside just 8 minutes against West Ham back in October.

Regardless of the price, though, huge congratulations to the person who backed this special - top punting, if not a little thoughtless upon first reflection... 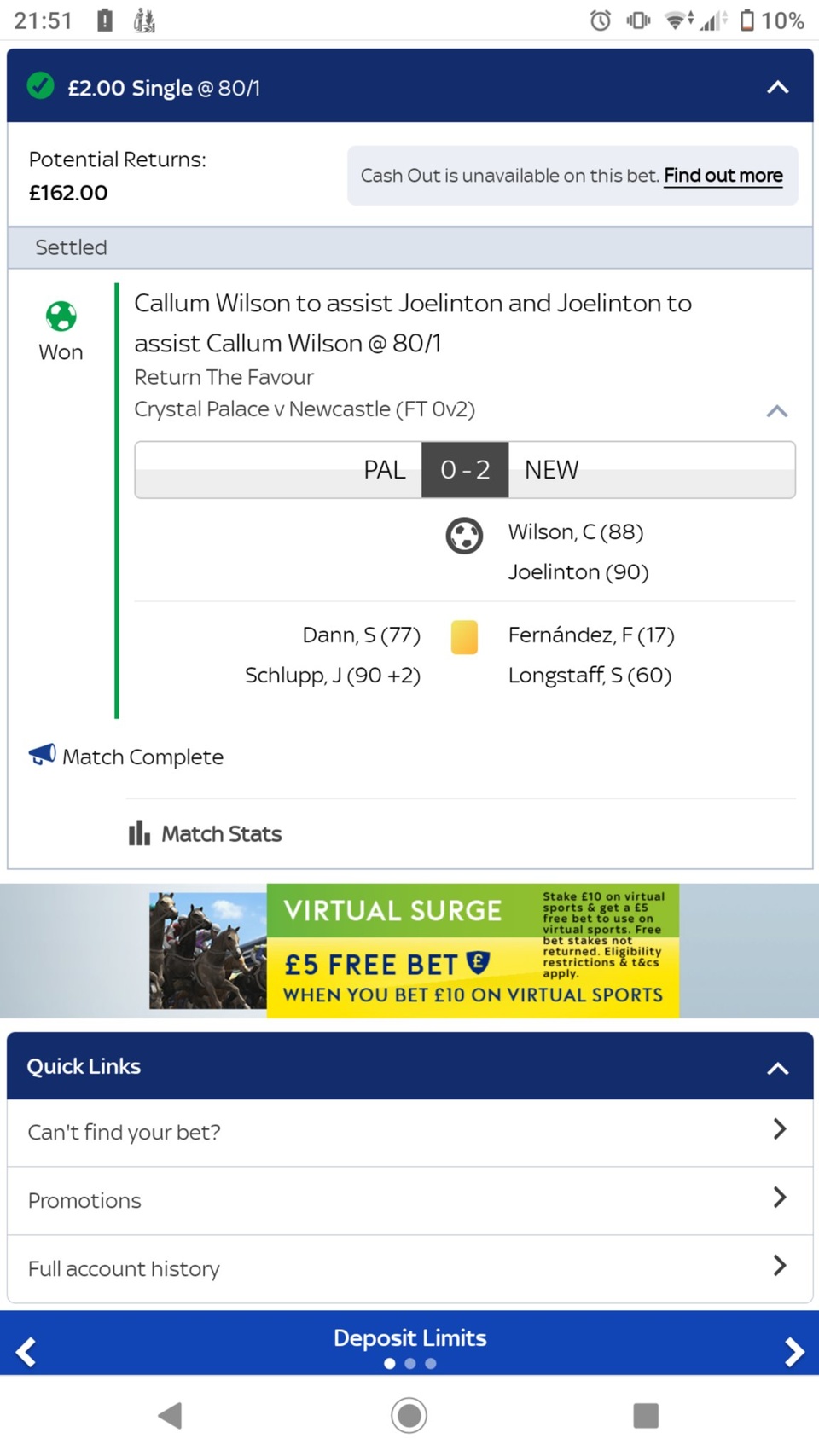 The madness didn't stop there, though, oh no. Sunday afternoon saw Manchester United travel to Southampton in a must-win game for Ole Gunnar Solskjaer's strugglers, and they got off to the worse start imaginable. Inside the opening 23 minutes, Saints central defender Jan Bednarek nodded home a deliciously-whipped-in corner from dead ball specialist James Ward-Prowse to put the hosts in front.

It was only the third goal the Poland international had scored for Southampton since joining the club three-and-a-half years ago, and his odds to open to scoring were a colossal 70/1! Indeed, one incredibly shrewd punter snaffled up this price and backed it with a fiver on Paddy Power, landing £350 worth of profit.

Unfortunately for this bettor - who I presume is a Saints supporter due to the nature of this bet - Ralph Hasenhuttl's side couldn't hold on to their lead despite going two goals in front, and United fought back to win the tie 3-2 thanks to some late brilliance from substitute Edinson Cavani. Still, what a bizarrely fantastic winner. 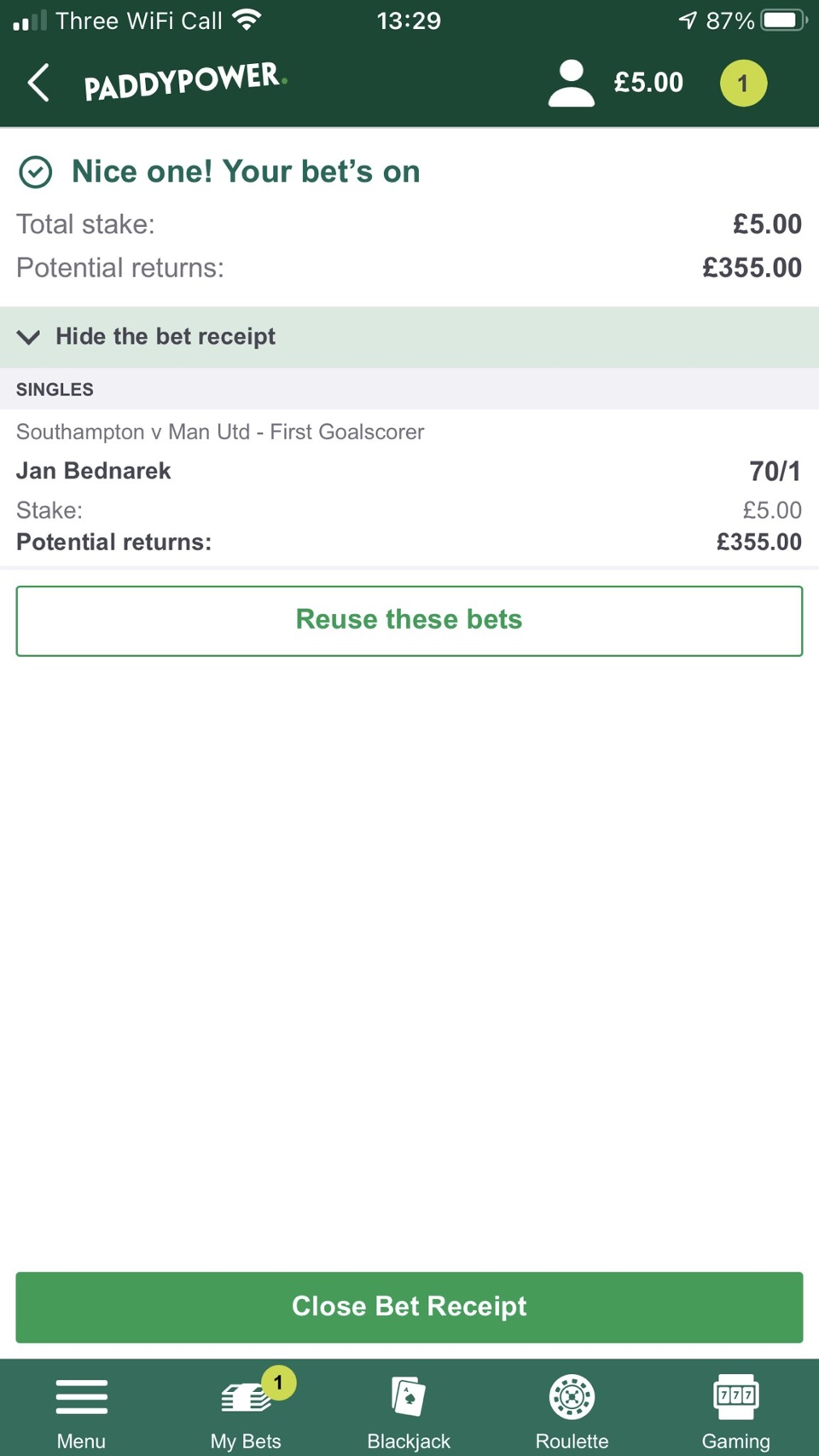