After months of speculation, Kevin De Bruyne was crowned PFA Player of the Year for the second consecutive season on Sunday night.

The Manchester City playmaker beat team-mate Ruben Dias, Harry Kane and Bruno Fernandes to the coveted award, despite missing a large chunk of the campaign with injury.

De Bruyne started just 23 league games in 2020/21, registering 12 assists and scoring 6 goals during those outings. Overall, in all competitions the 28-year-old contributed 10 goals and 18 assists for the Cityzens as they won the Premier League and League Cup, whilst making it to the final of the Champions League and semi-final of the FA Cup.

He had been odds-on favourite to win the award during the last month, but at the end of April was still priced up at a huge 40/1 in the market. A lot of punters jumped at that price, with one staking £20 just over two months' ago which returned him a whopping £820 last night.

While KDB was impressive when in action this season, Harry Kane certainly has a right to feel hard done by. The Tottenham talisman finished as the division's highest goalscorer with 23 goals, alongside registering the most assists of anyone in the top-flight with 14, but due to another trophy-less campaign spent in north London was overlooked by his fellow professionals.

The same can be said for Manchester United's Bruno Fernandes, who enjoyed a terrific first full season in England by contributing 18 goals and 12 assists in the league. After a relatively quiet end to the season, though, the Portugal international just fell short.

Ruben Dias won the Premier League Player of the Season award on Saturday alongside winning the Football Writers' Player of the Season last week, but missed out on a clean sweep on Sunday. We doubt he'll lose too much sleep over that one though, considering the trophy-laden season he's just had... 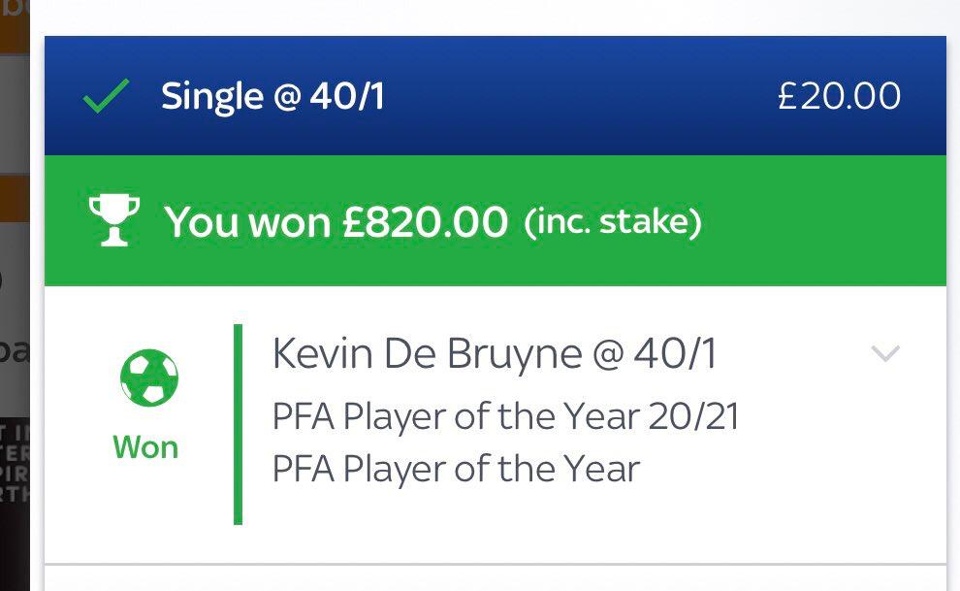