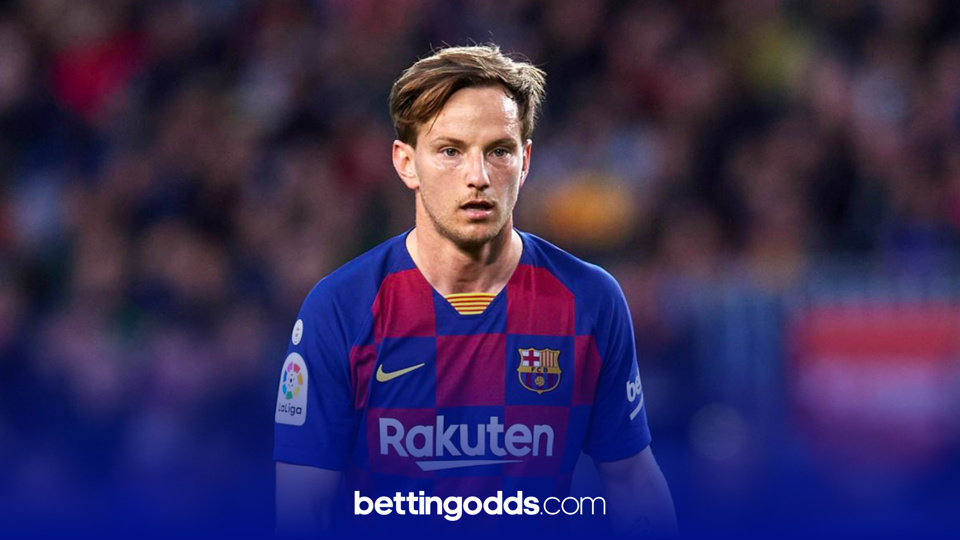 Ivan Rakitic features in our main selection for the evening at 7/4
By Anthony Eadson
16:58 Friday 7th August 2020 - 4 minute read

Saturday evening sees the return to Champions League football for both Barcelona and Napoli as the Italians travel to the Camp Nou after a 1-1 draw in the first leg back in February.

Both Dries Mertens and Antione Griezmann were on target in the first leg and having a look into the match prices for this one, Barcelona are the 8/13 favourites to win inside 90 minutes with the draw being offered at 3/1 with most bookmakers. Napoli can be backed at a top price 9/2 with William Hill, and the game can be seen live on BT Sport kicking off at 20:00pm

Sergio Busquets and Arturo Vidal are both suspended for the hosts while Samuel Umtiti will also miss the game due to a knee injury. Ousmane Dembele has trained with the first team this week as he recovers from injury but is not expected to feature. Lorenzo Insigne is a doubt for the game and faces a race against time as he recovers from a thigh injury.

I’ve had a look into the betting markets for this one and have picked out three football tips I like the look of.

Barcelona v Napoli Tip #1
Ivan Rakitic 1+ shot on target
1.75/1
Averages 2.1 shots on target at home this season Barcelona should dominate this game with plenty of chances
Odds correct as of 2020-08-07 17:05 Odds subject to change.

First up I’m backing Ivan Rakitic to have one or more shots on target at 7/4 with PaddyPower.  He’s actually averaging just over a shot per game at the Camp Nou this season for the Catalans and he looks a respectable price for another here. He’s only scored one for the hosts this season but I think Barcelona will dominate for long stages of this game and should see plenty of chances in front of goal.

Next up I’m going for a 1-1 draw as the correct score which looks the rather generous price of 15/2 with BetVictor. Four of Napoli’s last five games in the Champions League have seen both teams get on the score sheet. Further to that BTTS has also landed in five of the last six for Barcelona.

The first leg resulted in a 1-1 stalemate and I can see it happening again here. Both sides are actually unbeaten in this season’s competition and I don’t think the visitors should be too scared after a mediocre season by Barcelona’s high standards. At the time of writing, 15/2 is available from BetVictor with the same selection as short as 6/1 with William Hill.

Barcelona v Napoli Tip #3
Griezmann & Mertens 1+ shot on target, Pique & Koulibaly carded
25/1
Pique has been booked 20 times in all competitions this season Koulibably has been carded nine times this season Griezmann averages 2.1 shots per game at home this season Mertens has scored 16 goals this season
Odds correct as of 2020-08-07 17:00 Odds subject to change.

Finally I’ve picked out something at a bit more of a price for the optimists out there. This time it’s 25/1 for Antonie Griezmann and Dries Mertens to have a shot on target with both Pique and Koulibaly to be carded.

The first element to be added into this Same Game Multi is Antoine Griezmann to land a shot on target. The Frenchman was on target in the first leg, netting his side's solitary goal. He averages 2.1 shots per game at the Camp Nou this season and I’m hoping he can land another between the posts here.

For Napoli, Dries Mertens looks the pick from the shots on target market and again I’m backing him to have one or more. He’s netted 16 times in all competitions this season and with Lorenzo Insigne being a doubt he may have to lead the line here for the visitors.

Moving onto the cards and for Barcelona I’m backing Gerard Pique to find his way into the book. Incredibly the centre back has been booked no less than 20 times this season in all competitions which does give appeal to the 2/1 on offer as a single here.

The final part of this 25/1 shot is Kalidou Koulibaly to be carded. The Senegal captain has been linked with several Premier League clubs over the last few seasons but I’m fancying him to pick up his tenth yellow of this season here. Barcelona’s front three is enough to give any defence nightmares and with some Napoli players priced as short as 10/11 to be carded, Koulibaly looks the pick at 15/8. As always, please remember to always gamble responsibly.

🔴🔵 Every Barcelona goal en route to the last 16!