Barcelona vs. Sevilla Predictions: In-form Aubameyang to shine once more in crunch clash 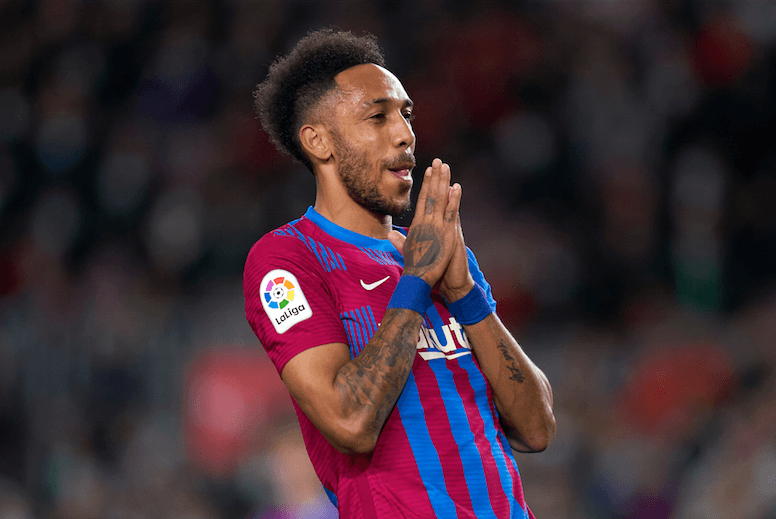 The crunch clashes keep on coming in La Liga with the Spanish top-flight serving up an intriguing battle between Barcelona (3rd) and Sevilla (2nd) at the Nou camp on Sunday night (La LigaTV, 8pm). The title is likely to end up at the Bernabeu, but the distant chasing duo can at least spice things up a notch by keeping the heat on leaders Real Madrid, whose vulnerabilities were ruthlessly exposed by a rampant Barcelona before the international break. Xavi's side have been superb of late and they'll now be looking to back-up that 4-0 hammering of Los Blancos with a win at home to a Sevilla side that have lost just two league games all season...

It will take an almighty slip up for Real Madrid to throw away the title, given that they are nine points clear of Sevilla with nine games to go, with Barcelona a further three points back albeit with a game in hand and buckets of momentum. Although, it's worth noting that Real Madrid travel to Celta Vigo on Saturday, meaning Carlo Ancelotti's men could have extended the gap at the summit before Barcelona and Sevilla meet on Sunday.

Barcelona head into the game on the back of seven wins from their last eight games in all competitions. They’ve registered five league wins on the spin and are unbeaten in 13 games dating back to early December when they were defeated by Real Betis, which remains Xavi’s only La Liga loss since his November appointment.

As a result they are now only three points behind 2nd-placed Sevilla, meaning a sixth straight league win will see them leapfrog their opponents on goal difference.

Sevilla themselves are enjoying an admirable 15 game unbeaten run in the league, although their title hopes and momentum have been somewhat punctured by their recent struggle to convert draws into wins of late, triumphing just twice in the last nine. They failed to win in the league in March, a month which saw their Europa League hopes ended by David Moyes' West Ham.

Los Nervionenses have, however, been extremely difficult to beat domestically, losing a league-low two games all season, while they’ve conceded just 19 goals. A win at the Nou Camp would be a huge statement of intent as they seek to reel-in Real Madrid, who they face in a couple of weeks.

Yet, Barcelona’s sizzling form means it’s no surprise to see the hosts installed as the 1/2 favourites to collect all three points this weekend, Sevilla are out at 13/2 to grab the spoils, with a draw at 37/10.

We tipped the 2/1 priced Pierre-Emerick Aubameyang to score anytime in El Clasico, but he went one better and bagged himself a brace in the 4-0 rout at the Bernabeu as he continued his electric goalscoring form.

From an Arsenal outcast to Barcelona’s main man in mere months, Aubameyang is absolutely thriving in his new surroundings. The striker has fired in nine goals in his last eight games for Barcelona, including the aforementioned brace against Real Madrid and a hat-trick against Valencia.

In fact, he’s already eclipsed his tally for Arsenal this season - seven goals in 15 games - and looks primed to get on the scoresheet once against this weekend. Aubameyang has already been nominated twice for La Liga’s Player of the Month award and is available at evens to transfer his fine form into April by scoring for the fourth game in a row.

However, it's the 11/10 for 2 or more shots on target (SOT) which we really like the look of. Aubameyang has amassed 20 shots, 13 of which have been on target, in seven La Liga games for Barcelona. He's had 10 shots in his last two league games, including a whopping six against Real Madrid, five of which were on target. He's averaging 2.64 shots on target per 90 minutes and we fully expect him to cause havoc on Sunday.

As mentioned, Sevilla have been a tough nut to crack this season, losing only to Real Madrid and Granada in the league.

However, as we reach the business end of the season their form has dropped a little, having failed to win in seven of their last nine games. Furthermore, they've not won in any of their last eight away games in all competitions, dating back to the start of the year.

It's impossible to look past Barcelona right now. Their form is exceptional, they are scoring goals for fun, and have enough in their armoury to break down a stubborn Sevilla side.

Barcelona are, however, a tad short for our liking in the outright market but they have been boosted from 12/5 to a best-priced 13/5 (BetVictor) to win and both teams to score. It's a bet that's landed in four of Barcelona's last eight games, and in three of their previous six home duels with Sevilla, who haven't won at the Nou Camp in 18 league games dating back to 2002.

Xavi's side have scored 10 goals in their last three games alone and conceded in 15 of their last 21 league and cup games.