Arsenal v Crystal Palace Tips: Lacazette to make it six in six at the Emirates 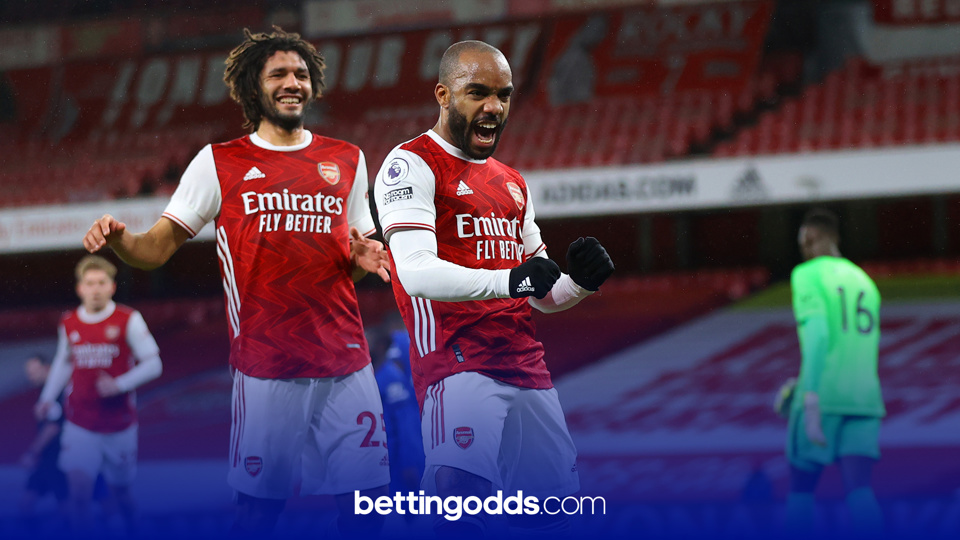 Alexandre Lacazette has scored five goals in his last five games and features in our 55/1 longshot for the game
By Anthony Eadson
18:37 Wednesday 13th January 2021 - 4 minute read

There’s just one game in the Premier League on Thursday evening as Arsenal take on Crystal Palace at the Emirates. The Gunners have won their last four games in all competitions, while Roy Hodgson’s side have just one victory in their last seven. We’ve got three football tips for the game that can be seen live on Sky Sports Main Event, kicking off at 8pm.

Gabriel and Thomas Partey will be assessed before the match for Arsenal with the pair lacking match fitness. Gabriel Martinelli was injured in the warm up against Newcastle and will miss out here. Emile Smith Rowe could well feature from the start, with Arteta naming an unchanged lineup to that at West Brom.

Crystal Palace have their own injury concerns, especially in the defensive area with Mamadou Sakho and Martin Kelly sidelined, with Scott Dann and Gary Cahill both doubtful. Connor Wickham, Jeffrey Schlupp and Wayne Hennessey will all miss out through injury.

Arsenal are priced at 1/2 with most bookmakers to get the three points on Thursday, an implied probability of 67%. The draw is available at 3/1, with Crystal Palace, who are unbeaten on their last two visits to the Emirates, priced at 5/1 for the win.

Arsenal’s Bukayo Saka has been a stand out performer in a turbulent first half of the season for the Gunners and I’m backing the 19-year-old to have at least two shots on target, which is priced at 11/4 with Betfair and Paddy Power.

No player in the Arsenal squad has averaged more shots per game this season than Saka with 2.2 per game. The youngster has two goals in his last three starts and has registered at least one shot on target in five of his last six, including two on target in the recent 4-0 win over West Brom. 11/4 is currently the top price available for Saka to have two or more shots on target (Betfair), which looks reasonable with Arsenal expected to dominate the game.

Andre Marriner is the referee in charge on Thursday and despite only averaging 2.60 yellow cards per game this season, Marriner has actually given out four bookings in each of his last four games. At a rather large looking 11/1 I’m having a nibble on Crystal Palace’s Eberechi Eze to be carded with bet365.

Paddy Power have this same selection at just 9/2 so I’d certainly be recommending the Stoke-based firms offering of 11/1 here. Eze has been cautioned in two of his last three games for Crystal Palace and should operate on the left side of the field against Arsenal where Bukayo Saka will feature heavily. With plenty of tracking back on the cards for the Eze and considering Saka is the 11th most fouled player in the league this season drawing two per game on average, I think 11’s looks a very reasonable price.

At 55/1 with Paddy Power I’ve also picked out a longshot, in the form of Alexandre Lacazette to score, with both Hector Bellerin and Luka Milivojevic to be carded.

It’s five goals in his last five games now for Alexandre Lacazette, with two of those being appearances off the bench. The frenchman was on target twice against West Brom in his most recent start and he can make it ten for the season with a goal against Palace.

No player has been booked more times this season in the Premier League this season than Hector Bellerin with six. Bellerin will have the job of taking care of Eberechi Eze, who ranks 9th in the league for fouls drawn this campaign. At a current top price of 9/2 I’m more than happy to welcome Bellerin to be carded into this 55/1 play.

Rounding off proceedings for the evening is Crystal Palace’s Luka Milivojevic to find his way into Andre Marriner’s notebook. The defensive midfielder picked up the most cards of any Premier League player last season with 12 and already leads the way for Palace this term with four yellows and a red in 13 appearances.

That’s 55/1 with Paddy Power on the longshot, best of luck to anyone following the selections. Please always make sure to gamble responsibly.