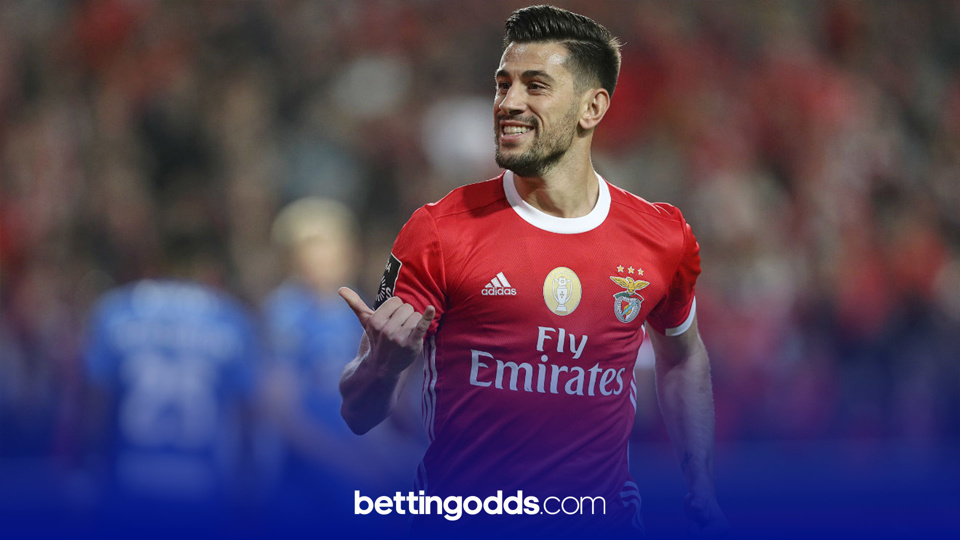 Pizzi is the top scorer in the Europa League this season with seven goals and features in our tips for Thursday
By Anthony Eadson
16:30 Wednesday 24th February 2021 - 4 minute read

Arsenal play the second leg of their Europa League tie against Benfica on Thursday evening. The game will be played in Greece instead of at the Emirates due to Covid restrictions in Portugal and it’s worth remembering that Arsenal do have a slight advantage going into this game with an away goal they scored in the first leg that finished 1-1.

We’ve got three football tips for the game which kicks off at 5:55pm and can be seen live on BT Sport 3. Having a look at a few prices, Arsenal can be backed at 4/5 to win the game and 2/5 to qualify for the next round, while the Eagles are priced at 10/3 for the win and 15/8 to advance to the last sixteen stage.

Mikel Arteta confirmed that Rob Holding will miss Thursday evening’s game due to concussion protocol. Thomas Partey will be assessed on the day, with Alexandre Lacazette pushing for a start after missing out in the last three.

Benfica’s Luis Miguel Alfonso Fernandes, or Pizzi as he is more commonly known, is currently the top-scorer in the Europa League this season with seven goals to his name. The 31-year-old gave us a profitable evening last Thursday after I correctly put him up to score, for which he truly obliged at the price of 7/2. This week I’m leaning towards the attacking midfielder to have a shot on target which is available at 6/5 with Betfair, although it may be worth shopping around as more bookmakers release their prices.

Pizzi has made five starts and two substitute appearances in the Europa League this campaign and he’s registered a shot on target in each of those where he has featured for over 25 minutes. Four of his goals have come from the penalty spot, but with 2.46 shots on target per 90 minutes in this season’s tournament, I’m happy to have him on side to have one or more, with Benfica needing to score and take the game to the Gunners.

Bukayo Saka has been instrumental for Arsenal this season and is averaging more shots per game than any other member of the Gunners squad in the Premier League. When asked on Wednesday on whether Saka’s consistency is unusual for a young player, Mikel Arteta replied:

“It is very unusual but he’s been doing a lot of unusual things. He’s dealing with things at his age in a very unusual way, but that’s why he’s showing what he’s showing, because his maturity is above his age and so his intelligence as well”

I’m backing the Saka to hit the target twice or more on Thursday which is available at 23/10, again with Betfair. Still just 19 years of age, Saka hit the target twice in the first leg and has registered two or more shots on target in four of his last nine starts in all competitions. This could well be Arsenal’s best route into the Champions League this season and I don’t expect them to sit back on their away goal in Greece.

At 32/1 I’ll also be having a small punt on both Bukayo Saka and Pizzi to have two or more shots on target. I’ve spoken above about how prominent Saka’s shooting has been for Arsenal this term, with him even getting off three shots against Manchester City at the weekend in the 1-0 defeat where his side created very little. Saka’s 2.23 shots per game is the highest at Arsenal this term, with him hitting this line in four of his last nine starts.

Pizzi has registered 2.46 shots on target per 90 minutes in this Europa League campaign and it would not surprise me to see him feature for longer than the 62 he did last week with the likelihood of Benfica needing away goals. He is one of the best penalty takers around and with both Pizzi and Saka hitting the target twice in the first leg, I’m getting behind a repeat at 32/1.

Best of luck to anyone following the selections. Please always gamble responsibly and use the appropriate tools provided should you need to do so.