Welcome to BettingOdds.com's dedicated page for recent winners! We strive to provide you with the most knowledgeable tips on a range of different sports, backed up with solid statistics and reasoning to ensure that you have the best chance of landing those all-important winners.

Keep an eye on this page for all of our recent winning bets, as we will keep it regularly updated to see which type of football tips seem to be working the best.

Below, you will find a list of all of our winning bets. Check in on this page to track our profit and make sure you don't miss out on any future tips by regularly reading our betting previews for all of the upcoming football and golf main events. 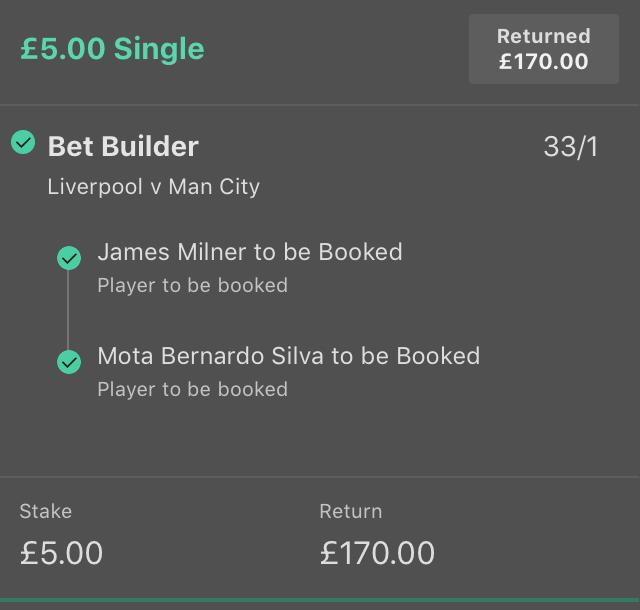 Stunning work from @AnthonyEadson who delivers us another winner - this time with the Sunday Bet Builder! 💪

Winning bet: Brentford & Morecambe to be promoted; Blackpool to win in 90 mins @ 5/1

Sunday 16th May - The British Masters

Winning bet: Mahrez and Foden 1+ shot on target each @ Evens

Winning bet: Thomas Soucek, Jack Harrison and Joao Cancelo each to have 2+ shots @ 8/1

Our team of in-house writers, who each have an extensive knowledge and passion for sport, seek to provide you with comprehensive betting previews for all of the major weekly sporting events.

Today's football odds
recent-winners
uk
Advert Disclaimer
Bettingodds.com is a free online resource which endeavour to provide helpful and useful content and odds comparison to its visitors. Please be advised that Bettingodds.com accepts affiliate commission from the companies appearing on the site, and agreed commission levels impact the location and order in which the companies (and/or their products) are presented on the website. Any ratings that appear on this site is determined by our subjective opinion of the brand but also based on market share and reputation, each brand's conversion rates, commission paid to us and general consumer interest. Company listings on this page don't imply our endorsement. We do not feature all providers on the market. Except as expressly set forth in our terms and conditions, all statements and warranties regarding the information presented on this page are disclaimed. The information, including odds, which appear on this site is subject to change at any time.
Money Back As CASH Up To £50 (APP Only)
#AD 18+ Playsafe. New UK users only. The cash refund will equal the amount of your first deposit up to £50. Payment restrictions & T&Cs apply. 18+ begambleaware.org
Bet £10 Get £30 In Free Bets
#AD 18+. Play Safe. New customers using Promo code H30 only, Min £10/€10 stake,  min odds 1/2, free bets paid as 2 x £15/€15, free bets credited after  settlement of first qualifying bet, free bets will expire 30 days after  the qualifying bet is placed, payment method/player/country restrictions apply.
Welcome Offer
#AD Bet £10 & Get £50 in Free Bets for new customers at bet365. Min deposit requirement. Free Bets are paid as Bet Credits and are available for use upon settlement of bets to value of qualifying deposit. Min odds, bet and payment method exclusions apply. Returns exclude Bet Credits stake. Time limits and T&Cs apply.
Bet £10 Get £30 In Free Bets + 100 Free Spins
#AD 18+ New customers only. Opt in, bet £10 at odds 2.00+ within 7 days, no cashout. Get 3x £10 Free Bets, set events at odds 2.00+. Plus 100 Free Spins, no wagering. Free Bets and Spins expire in 7 days. Card payments only. T&Cs apply, see below. Please gamble responsibly.
Bet £10 Get £60 in Bonuses
#AD New UK customers only. Register using the promo code BETFRED60, deposit and place first bet of £10+ on Sports (cumulative Evens+) within 7 days of registration. First bet must be on Sports. £20 in Free Bets to be used on Sports, £10 in Free Bets to be used on Lotto and 50 Free Spins (20p per spin) credited within 48 hours of bet settlement. Further £20 in Free Bets credited 5 days after settlement. Bonuses have a 7-day expiry. Payment restrictions apply. SMS verification and/or Proof of I.D and address may be required. Full T&Cs apply.
Bet £20 & Get It Back As CASH If It Loses
#AD New customers only. Place your FIRST bet on any Football market and if it loses we will refund your stake in CASH. Max refund for this offer is £20. Only deposits made using cards will qualify for this promotion. T&Cs apply.
Get Up To £100 In Free Bets
#AD New customer offer. Place 5 x £10 or more bets to receive £20 in free bets. Repeat up to 5 times to receive maximum £100 bonus. Min odds 1/2 (1.5). Exchange bets excluded. Payment restrictions apply. T&Cs apply.
Bet £10 Get £20 In Free Bets
#AD Min stake £10. Min odds 1/2 (1.5). First bet only. Free bets expire in 7 days. Cashed out bets won’t apply. Payment method restrictions. Online UK customers only. 30 days to qualify for £20 in Free Bets. 18+. T&Cs apply
Bet £10 On Football & Get £40 In Free Bets + £10 Bonus
#AD £/€10 deposit using promo code "10FREE" - Minimum stake £/€10 at odds of 1/2 (1.5) - Free bets credited upon qualifying bet settlement and expire after 7 days - Free bet stakes not included in returns - Casino Bonus must be claimed within 7 days • To withdraw bonus/related wins, wager the bonus amount 40 times within 14 days • Casino Bonus expires after 60 days - Withdrawal restrictions, payment methods, country & full T&Cs apply
Bet £10 Get £20 In Free Bets
#AD. New members. £10 min deposit & bet on sportsbook, placed & settled at 1.5 min odds within 14 days of sign-up. Win part of E/W bets. 2 non-withdrawable £10 Free Bet Tokens: accept in 7 days, valid for 7 days from acceptance (ex. E/Ws & Multiples), stakes not returned. Click here for Rules & Exclusions. Bet Responsibly. BeGambleAware.org. 18+