World Cup Odds: The England skipper is vying for his fifth goal in as many World Cup qualifiers this evening.
By Callum Pragnell
14:02 Wednesday 8th September 2021 - 4 minute read

After a faultless opening five matches to their 2022 World Cup qualifying campaign, England face their stiffest test yet this evening when they travel to Warsaw to take on Poland.

The Three Lions edged past tonight’s opponents 2-1 during the reverse tie at Wembley back in March, but away from home and in front of a hostile Poland-dominated crowd, the task in hand will, on paper, be much sterner this time around.

That is not to say that England aren’t heavy favourites to extend their gap at the top of Group I. Gareth Southgate’s side are short in the betting, priced at 4/7 for the three points, while Poland can be found at 6/1 to take the win on home soil.

After being rested from the outset against Andorra, Harry Kane will return to the fold from the start this evening, replacing Patrick Bamford through the middle as England’s main attacking threat. Kane was introduced as a second half substitute on Sunday evening and took just 10 minutes to find the net, coolly dispatching a penalty in the 72nd minute.

That takes the Tottenham striker’s tally to four in his last four World Cup qualifiers, with San Marino the only opponent he has not scored against in Group I, due to not featuring when the two sides met earlier this year. 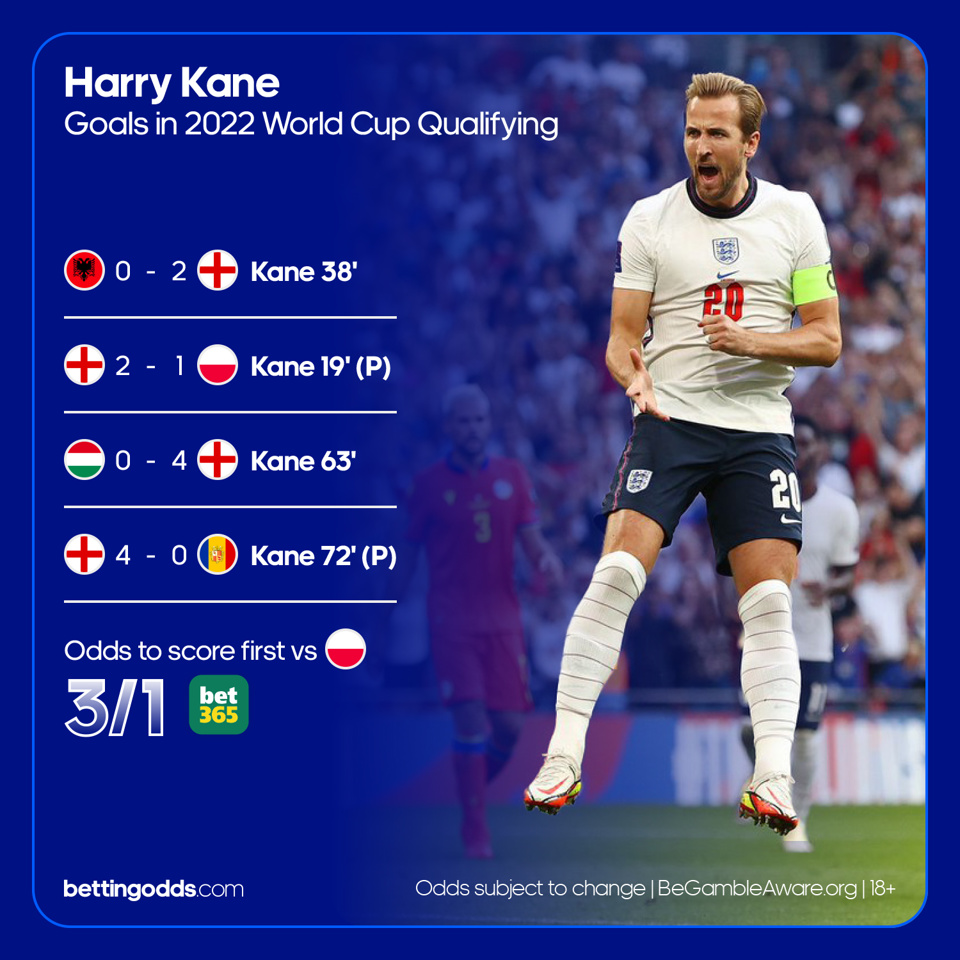 Kane’s record in World Cup qualifiers throughout the last six years is somewhat remarkable. The 27-year-old has notched nine WCQ goals in 10 appearances during his senior international career, healthily contributing to the 40 he has scored in just 63 overall outings for the Three Lions since making his debut in 2015. More strikingly, Kane has scored at least one goal in his last 14 successive qualifying matches for England in the Euros and World Cup combined, and he doesn't look like stopping any time soon.

He is currently on a 100% scoring streak and a goal this evening against Poland - England’s toughest opponents in qualifying - would provide the perfect end to a really positive international break for him on a personal note, while another win and clean sheet for Southgate’s men in the Polish capital would all but cement their place in Qatar next December, not that there was any real concern about them failing to do so anyway.

Kane is unsurprisingly short in the betting this evening. England’s talisman is a best-price 11/10 to find the net anytime with bet365, Paddy Power, Betfair & BetVictor, while many firms are offering him at Evens to score throughout the 90. The value, then, could be to back him to open the scoring - just like he did in the reverse fixture in March - which is up at 3/1 with bet365.

You can get odds of 5/1 for Kane to score a brace in Warsaw, and he’s 25/1 to bag a hat-trick with Paddy Power. Meanwhile, the Irish firm are also offering 4/1 for last season’s leading Premier League assist-provider to set up a goal anytime against Poland, which could also prove a shrewd pick given the pool of creative talent that will be supporting him in the shape of Raheem Sterling, Bukayo Saka, Mason Mount and/or Jack Grealish.

With the 2022 World Cup still 15 months away from starting, prices for the tournament’s Golden Boot are yet to be released, however Kane will likely lead the betting or at the very least be among the top three favourites.

He scooped the prestigious award in Russia three years ago after scoring six goals as England reached the semi-finals, but will face strong competition for it in 2022 with the likes of Kylian Mbappe, Romelu Lukaku, Neymar Jr. and Lionel Messi all to contend with in Qatar.

Keep an eye on our dedicated World Cup top scorer page for prices, as we will bring you them as soon as they are released by the bookmakers.