World Cup Qualifier Tips: Ronaldo to score and take his shirt off to land 10/1 double 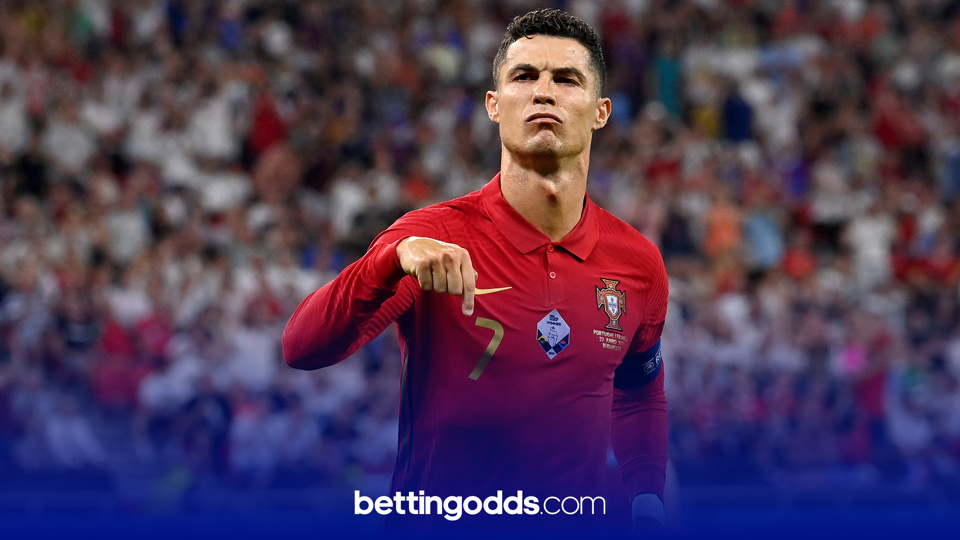 World Cup Qualifier Tips: Could Ronaldo take his shirt off and be shown a yellow if he breaks the record for the most International goals
By Anthony Eadson
16:24 Tuesday 31st August 2021 - 4 minute read

The first International break of the season is upon us and after the monumental achievement of reaching the final of the European Championship, England will be back in action. The Three Lions have three fixtures over the next 9 days with the first taking place on Thursday 2 September and we’ll have tips and full preview for each of those here on BettingOdds.com

There’s a flurry of interesting fixtures on Wednesday evening and @AnthonyEadson has picked out a double he likes the look of with his World Cup qualifier tips. The two selections currently pay best with bookmaker bet365 at just over 10/1 and can be backed using their Bet Builder feature.

Another record for Ronaldo

There’s been one man who has dominated the back pages over the last few weeks and that is Cristiano Ronaldo who today was confirmed a Manchester United player for the second time.

On Wednesday Ronaldo will be on duty for his beloved Portugal as they take on the Republic of Ireland and has the chance to become the top International goalscorer in the history of football.

The 36-year-old is currently level on 109 International goals along with Iran’s Ali Daei who played his last game back in 2006. There’s no denying that Ronaldo is clearly one of the greatest, if not the greatest of all time and this record will further etch his name into history.

As you can imagine, Ronaldo has a fairly healthy scoring record when it comes to finding the net in World Cup qualifiers and has bagged 31 goals in 41 appearances. 8/13 is on offer for Ronaldo to score anytime against Ireland on Wednesday with other firms such as Sky taking a more cautious approach at 2/5.

Could he take his shirt off?

Ronaldo’s mouth has got him in trouble with certain referee’s over the years and over his International career, the former Real Madrid man has picked up 25 yellow cards. Eight of those 25 bookings have come in World Cup qualifiers and I think he could be in line for another against Ireland.

With the record at stake, I think there’s an added chance of Ronaldo taking off his shirt should he score, which would lead to a yellow card from referee Matej Jug. The official who plys his trade in Slovenia has given out 29 yellow and 1 red card across the six games he has taken charge of this season from the Europa Conference League and the Slovenian top-flight.

Ronaldo will obviously know the consequences of taking off his shirt, however this is a record that will mean a lot to him and I for one cannot see it being broken for a very long time!

6/1 is on offer from bet365 for Ronaldo to be carded against Stephen Kenny’s side which looks to be the industry top price at the time of writing. By using bet365’s slick Bet Builder feature, punters can combine the Portuguese International to get on the scoresheet and be carded at a rather large looking 10.3/1.

For some context the same bet is currently paying as short as 5/2 with Paddy Power! With 31 goals in 41 World Cup qualifiers (75.6%), the 8/13 which implies a 61.9% of scoring looks a reasonable one considering the game will be played on home soil for Portugal in the Algarve.

The 6/1 for a card also looks an attractive price for a player who has averaged 1.7 fouls per game across his last three World Cup qualifiers and has picked up eight yellows in his last 41. Again, other firms are going almost half this price here with Betfair putting up a rather measly looking 12/5.

With Ronaldo having the chance to break the record for the most International goals on Wednesday and the increased chance of him being carded and taking his shirt off, the 10/1 here looks a peach of a price that gets even better when you consider the 5/2 on show from other firms.