World Cup Groups: The Forecast Acca you should be backing at over 2000/1

By Anthony Eadson
16:19 Thursday 13th October 2022 - 6 minute read
Bet £10 Get £60 in Bonuses
#AD New UK customers only. Register using the promo code BETFRED60, deposit and place first bet of £10+ on Sports (cumulative Evens+) within 7 days of registration. First bet must be on Sports. £20 in Free Bets to be used on Sports, £10 in Free Bets to be used on Lotto and 50 Free Spins (20p per spin) credited within 48 hours of bet settlement. Further £20 in Free Bets credited 5 days after settlement. Bonuses have a 7-day expiry. Payment restrictions apply. SMS verification and/or Proof of I.D and address may be required. Full T&Cs apply.
Bet £10 & Get £50 in Free Bets
#AD Bet £10 & Get £50 in Free Bets for new customers at bet365. Min deposit requirement. Free Bets are paid as Bet Credits and are available for use upon settlement of bets to value of qualifying deposit. Min odds, bet and payment method exclusions apply. Returns exclude Bet Credits stake. Time limits and T&Cs apply.
50% Up To £50 Welcome Bonus
#AD 18+ begambleaware.org; New bettors get 50% of deposit up to £50; Once per household; Min deposit £15 (no Skrill/Neteller); Wager a total of 8 times deposit + bonus, with max qualifying bet stake equal to your initial bonus amount; Bonus expires after 60 days; Min odds of 4/5 on singles, or 2/5 per leg for acca; Some bet types excluded; See full terms.
Up To £50 Money Back In Cash
#AD. New customers using code YSKWEY. Place 5 x £10 Sportsbook bets on any market at minimum odds of 2.0 (Evs), and get money back as Cash if it loses. Max refund per qualifying bet is £10 (up to £50 in total). Debit Card deposits only (Apple Pay excluded). T&Cs apply. 18+ begambleaware.org
Bet £10 On Football Get £40 In Free Bets
#AD 18+. Play Safe. When you sign-up via Mobile using promo code P40 and place a bet of £10/€10 or more we will give you 4x £10/€10 free bets credited after settlement of first qualifying bet, free bets will expire 30 days after the qualifying bet is placed, payment method/player/country restrictions apply.
£40 In Bonuses
#AD Place a qualifying £25 fixed odds bet at odds of 1/2 or greater. Qualifying bet cannot be placed in-play or cashed out early. A first free £5 fixed odds bet will be credited upon settlement of the qualifying bet. 4 x following £5 free fixed odds bets will be added to your account on consecutive days. Free bets and spins must be claimed within 28 days of opening. Free bet/spin stake not included in any winnings. Ts&Cs Apply. 18+ begambleaware.org
Bet £10 Get £40 In Bonuses
#AD 18+ New customers only. Opt in and place a £10 bet on Horse Racing at odds of 2.00+ within 7 days of opening a new account; excludes cashed out bets. Receive 3x £10 Horse Racing Free Bets, valid on set events only at odds 2.00+. Plus, a £10 Slot Bonus, selected games, wager 20x to withdraw a max of £250. Bonuses expire in 7 days. Card payments only. T&Cs Apply. Please Gamble Responsibly.
Bet £10 Get £30 In Free Bets (APP Only)
#AD New UK, IE & Malta customers only. 18+. Min £10/€10 first deposit using Debit Card or Trustly. Place a bet of £10 at min odds of 1.5. Free bets expire in 90 days. Full T&Cs apply.

It’s now just over six weeks until the World Cup gets underway in Qatar and today at BettingOdds.com we’ve decided to take a look at the World Cup groups. We’ve put together an acca consisting of our forecast for each group for who will finish first and second and advance to the knockout stages. £1 on the acca potentially returns £2,171 with bet365.

Group A includes the hosts of the tournament, Qatar, who will kick-off the World Cup with the curtain-raiser against Ecuador on November 20. It’s hard not to envision the Netherlands topping Group A, the Orangje are currently on a run of 15 games without defeat in all competitions which includes a 4-1 away win in Belgium. Memphis Depay was the joint top scorer in European qualifying with 12 goals in 10 matches and along with the Netherlands we think Senegal will also qualify and finish in second spot. In Edouard Mendy and Kalidou Koulibaly the African side possess some real quality at the back and it could well be this strength and structure in defence that gives them the edge over Qatar and Ecuador.

When looking at the average ranking for each Group, Group B has the lowest figure (15) according to FIFA’s world ranking system, with all of the sides in here currently inside the top-20 in the world. This could lead to the argument that Group B is the toughest, however we are predicting that England will finish top, although we don’t think that they will win every game after a really poor run of results so far in 2022. Wales and USA will most likely fight it out for second place and it could well be a piece of quality from Gareth Bale or Aaron Ramsey that will take Rob Page’s side through to the knockout stages.

By the time the World Cup kicks-off it will have been almost three and a half years since Argentina last lost a match. That defeat was all the way back in 2019 to Brazil and since then they have beaten their South American rivals twice as well as playing out a goalless draw. We think Lionel Messi could well do something special in Qatar at potentially his last World Cup and would not put any off backing them to lift the trophy in December. Argentina look by far the most likely side to top Group C and we’re backing Poland to also make it through. With Robert Lewandowski in great form for Barcelona and with a stiffer spine to their squad than Mexico, we think the Poles will have the edge on the two other sides in this group besides Argentina.

Oliver Giroud is now just two goals behind Thierry Henry in the all time top scorers list for the French National team, and Les Blues come into the tournament as the second favourites behind Brazil priced at 6/1 with most firms. We don’t think topping this group will be as straightforward as many punters think but it doesn’t take an expert here to realise that both of the European sides in this group look a cut above the other pair. Denmark should be easily capable of beating Australia and Tunisia and we think they will follow France home on what could be an interesting group to follow 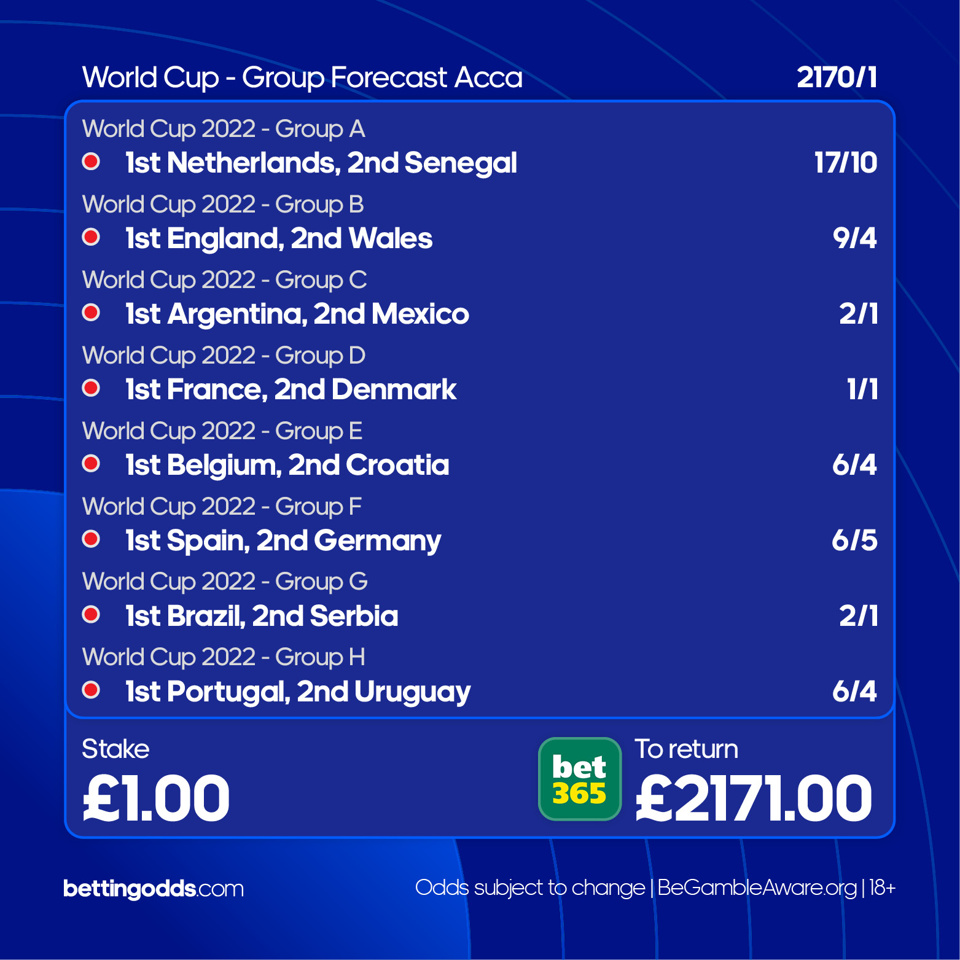 Group E looks an absolute belter with two of World football’s heavyweights being drawn alongside each other in Germany and Spain. In a similar situation to Group D we have two teams here who possess a significant amount of quality over the two other sides in Costa Rica and Japan. Spain may not have an abundance of world-class strikers at their disposal but they showed flashes at Euro 2020 of what is to come from this side with top talents such as Pedri and Gavi. We see Spain going really deep into this tournament and think it will be Luis Enrique’s side who finish top of the pile with Germany in second.

Moving on to Group F and here we find Canada, Croatia, Morocco and Belgium in what potentially could be one of the more difficult groups to predict. Both Canada and Morocco should not be overlooked here and have players who are capable of producing moments of magic to cause a potential upset. Belgium’s so called Golden generation may be on the decline but with Kevin De Bruyne still at the peak of his powers it’s hard not to see them qualifying and we think they can take top spot. Croatia may not be anywhere near the levels they achieved at the most recent World Cup when making the final in Russia but they look the wise play to finish as runners up in what could be a tight group. It’s also worth noting that Croatia have qualified for Nations League finals, where they finished top of a group that included both France and Demark.

It’s been 20 years since Brazil last lifted the World Cup trophy, but they head to Qatar as the bookmaker favourites at just 4/1. Neymar is another player who could set a record out in the Middle East as he is currently just two goals behind Pele in the all time top scorer charts for Brazil. There is no denying that their squad is stacked with talent and we see them as one of the only sides who are likely to take a possible nine points from nine in the group stages. In Aleksandar Mitrovic, Serbia have a striker who knows how to find the net having scored

51 league goals in his last 53 league appearances at club level for Fulham. This predatory instinct  could well be the difference in what look like tight games between the trio of Serbia, Switzerland and Cameroon.

Raphael Leao, Crisitano Ronaldo, Bernardo Silva…Portugal have an array of excellent attacking talents at their disposal heading to Qatar. That’s before we’ve mentioned some of their top quality defenders in the form of Ruben Dias and Joao Cancelo, both of Manchester City. Portugal can often underwhelm at tournaments and only one won a match in normal time when crowned European Champions back in 2016. Group H looks an exciting one and we are predicting Portugal to come out in top spot, with Uruguay being the other side that qualifies for the latter stages of the tournament.

Combining these eight forecast picks from each of the World Cup groups currently pays 2170/1 with bookmaker bet365.

Wales vs. England Free Bets and Betting Offers: All the best bookmaker offers for Group B grudge match

Top Five Managers of the Championship Season so far

Netherlands vs. Qatar Betting Tips: Back Gakpo to find the net

The Free-To-Play 4 Scores Challenge From bet365