World Cup 2022: England's likeliest starting XI according to the odds

Following a memorable summer of England going painfully close to winning their first ever European Championship, the wounds have now healed and focus has started turning to next winter’s World Cup in Qatar.

We’ve got just over 14 months until the biggest event in world football kicks off and the excitement is already building. The bookies have priced up who they feel will win the tournament but the odds aren’t limited to the outright market.

Betfair have priced up which players they think will start the Three Lions’ opening clash next December, so below we’ve taken a closer look into their assumed starting XI based on the odds. 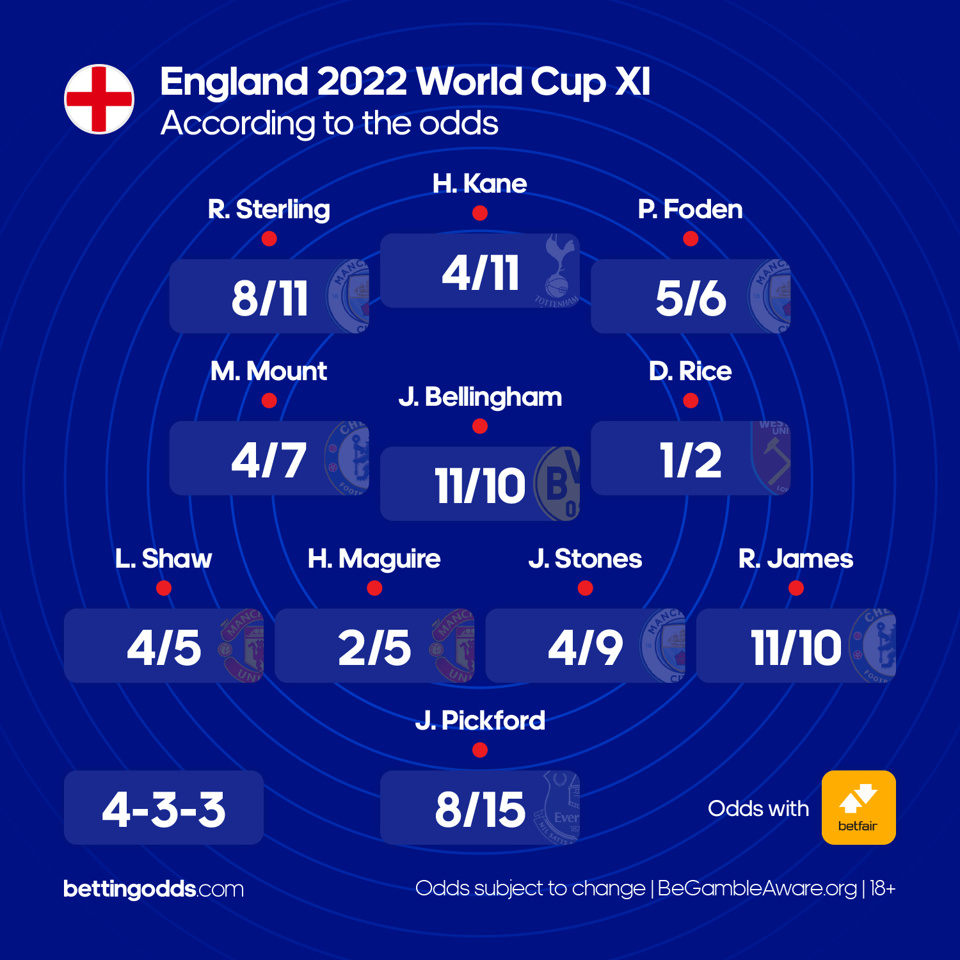 No surprises to see who lines up between the sticks at a very short 8/15. Jordan Pickford was a bit of a marmite player prior to the Euros; plenty of people rated the Everton man for his exemplary distribution but there is no doubt that he has a mistake or two in his locker, which led to plenty of supporters having reservations about his inclusion to the starting fold at Euro 2021.

However, the 27-year-old silenced his critics with a phenomenal tournament in the summer and is unquestionably England’s strongest goalkeeper. If deemed fully fit, Pickford will line up for England in Qatar ahead of the likes of Nick Pope (7/2) and Aaron Ramsdale (9/2).

The biggest take from Betfair’s price-list is that Reece James (11/10) is shorter than Kyle Walker (6/4). It may only be marginal but it’s still quite surprising given just how good the Manchester City defender was during the Euros and how well he’s started the 2021-22 campaign. James is a tremendous footballer who offers a little more going forward, but defensively there’s no doubt that Walker has the edge.

Should Southgate line up with a back-four - as he did for the majority of Euro 2021 - Betfair are predicting James will start the opening match ahead of Walker, Kieran Trippier (9/4) and Trent Alexander-Arnold (10/3), although if a back-three is reintroduced then we would probably see both Walker and James start, with the former lining up as a right-sided CB and James deployed as a right wing-back.

Elsewhere in defence, the trusty pairing of John Stones and Harry Maguire are short prices to start the WC curtain-raiser alongside Manchester United’s Luke Shaw - a standout player at the Euros - at left-back ahead of Chelsea’s Ben Chilwell (7/4).

Declan Rice is rapidly emerging as one of the best central midfielders in Europe and this season he has been in inspired form for West Ham. An ever-present figure at Euro 2021, Rice is tipped to start England’s first game at the 2022 World Cup and it’s impossible to build a case against his inclusion.

Interestingly, Jude Bellingham is the next shortest priced holding midfielder at 11/10, ahead of Kalvin Phillips who is just a shade longer at 6/5, and Jordan Henderson, who hasn’t even been priced up!

The battle between Bellingham and Phillips will be an interesting one, but with one plying his trade regularly in the Champions League and one playing for a (current) bottom-half team in the Premier League, it seems as though the 18-year-old could have the upper-hand.

Meanwhile, Mason Mount is heavily fancied to start in the advanced central midfield position, odds-on at 4/7, that is ahead of the likes of Jesse Lingard (15/2), the emerging Emile Smith Rowe (5/1) and James Ward-Prowse (10/1).

Harry Kane is experiencing a painfully slow start to his Premier League campaign this season and is yet to find the net in the top-flight after the opening two months, but there is no question that the Tottenham front man will be tasked with leading the line in Qatar, which is reflected in Betfair’s odds to start England’s first encounter.

Raheem Sterling is the next shortest price in the betting at 8/11 and I would expect Southgate to entrust the international stalwart from the outset due to his vast tournament experience, especially given how important his goals were to the team at the Euros while Kane was misfiring. The real question will be who lines up on the left or right hand side of the Three Lions’ front-three (depending on which side Sterling starts).

At present the battle certainly appears to be between Man City duo Phil Foden (5/6) and Jack Grealish (6/4), with the former just edging the market after his dazzling display against Liverpool last weekend. In such a fluid market which is determined by game-to-game performances, however, this could easily change and a surge from Grealish would see his price shorten.

The likes of Jadon Sancho (2/1), Bukayo Saka (3/1) and Mason Greenwood (6/1) all follow up in the betting, with Arsenal’s Saka offering arguably the most value in the market given his impressive international form and how often he has been used by Gareth Southgate.