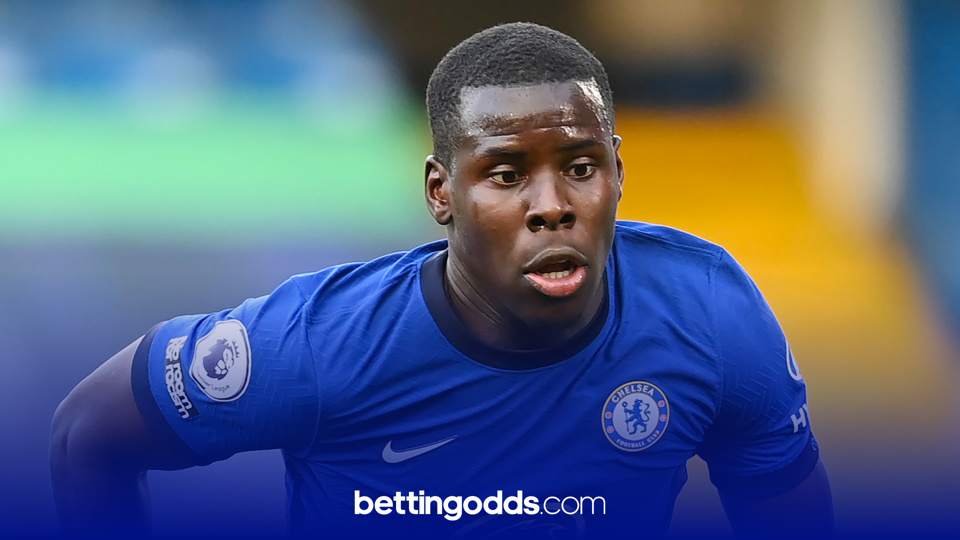 Kurt Zouma has registered a shot on target in seven of his eleven Premier League games this term and features in our tips for Wolves v Chelsea
By Anthony Eadson
17:26 Monday 14th December 2020 - 5 minute read

The first of 10 Premier League games over Tuesday, Wednesday and Thursday comes from Molineux where Wolves entertain Chelsea. The game will be shown live on Amazon Prime Video at 18:00 Tuesday and our man @AnthonyEadson is back with three football tips he likes the look of.

After being sent off against Aston Villa at the weekend Wolves will be without Joao Moutinho, which should see Ruben Neves take his place in the engine room. Jonny Castro and Raul Jimenez remain sidelined for the hosts with Willy Boly pushing for a recall into the starting line-up.

Frank Lampard has confirmed that Christian Pulisic is back in the squad for the game against Wolves, however he is only expected to feature from the bench. Hakim Ziyech and Callum Hudson-Odoi will not be back until Boxing Day at the earliest and remain sidelined for the Blues.

Chelsea were unbeaten in nine league games before tasting defeat at Everton on Saturday, although are still the strong favourites to win on Tuesday, priced at 8/11 to do so. The draw can be backed at 11/4 with a home win for Wolves given a 20% implied probability with odds of 4/1.

Chelsea were the 5-2 winners the last time these two sides met in the league at Molineux and I’m hoping for another action packed game here. The first of three selections that have caught my eye is for Chelsea’s Reece James to have one or more shots on target, priced at 11/4 with both Betfair and Paddy Power.

Those who watched Everton v Chelsea on Saturday will have seen Reece James twice trouble Jordan Pickford in the first half with two attempts between the sticks, which was priced at 22/1 with Betfair. One of those was a free-kick, with James stepping up as a potential full time free-kick taker from certain areas of the field. The 21-year-old has been fantastic this season and has registered a shot on target on five of his ten starts in the league. At 11/4 this looks a reasonable price from Paddy Power with Sky Bet going much shorter at 15/8.

I’m staying in the shots on target market for my second bet of the evening which comes in the form of a Kurt Zouma shot on target. This is currently available at 19/5 with Coral although with that price liable to shorten, I’d still recommend the 11/4 available from Paddy Power in their ‘Power Prices’ section.

With four goals to his name in the league already this season, Kurt Zouma has been deadly from set-piece situations for Frank Lampard's men. A remarkable 64% of Zouma’s Premier League games this term have seen the Frenchman land a shot on target, that’s seven of eleven league games this selection has landed. With a shot accuracy of 78% this season the 28-year-old is the most accurate of the top-25 scorers in the league this term. 19/5 with Coral looks too big here and I’d be happy to be involved here on anything down to as short as 5/2.

The third and final selection for Wolves v Chelsea is a longshot priced at 125/1 with bet365, which consists of Ruben Neves, Ben Chilwell and Leander Dendoncker all to be carded. A large part of my way in here is that referee Stuart Attwell will be in charge of the game who currently ranks first of 19 the referees to take charge this season for yellow cards per game with 5.17 on average.

Ruben Neves should come into the starting XI with Joao Moutinho being suspended in this one and he is certainly one who is no stranger to a yellow card. Since the start of the 2019/2020 season, the Portuguese midfielder has been cautioned on no less than 12 occasions. Three of those have come already this season and with Chelsea’s star-studded attack, I fancy him to pick up another on Tuesday.

For Chelsea, I’m fancying Ben Chilwell to pick up a card. Readers of my weekly column on Premier League players to be carded will have enjoyed two of three winners this weekend with Matt Targett and Moussa Sissoko booked. Matt Targett’s card was for a foul on the lightning quick Adama Traore and I think we could see a repeat of that here with Chilwell. Booked already in the Champions League and Premier League this season, I think Chilwell’s chances of being carded rise significantly with Adama Traore being his direct opponent and Stuart Attwell being the man in the middle and I’m willing to take a chance on the 9/2 from bet365.

The final player in this ‘to be carded’ treble is Wolves’ Leander Dendoncker. The German has been booked twice in his last five league games and is currently averaging more fouls per game this season than any other player at the club this season with 1.6 on average. At 5/1 with bet365 and with Attwell in charge, I do again think this play looks an attractive prospect from bet365.

By using the Bet Builder feature from bet365 those three players to be carded pays 125/1. The same three players are only 57/1 with Paddy Power so I’d certainly recommend the Stoke-based firm for this bet. Enjoy the game, and as always please gamble responsibly.

Straight from the training ground!