West Ham v Liverpool Tips: Trent to make it five in a row against Hammers 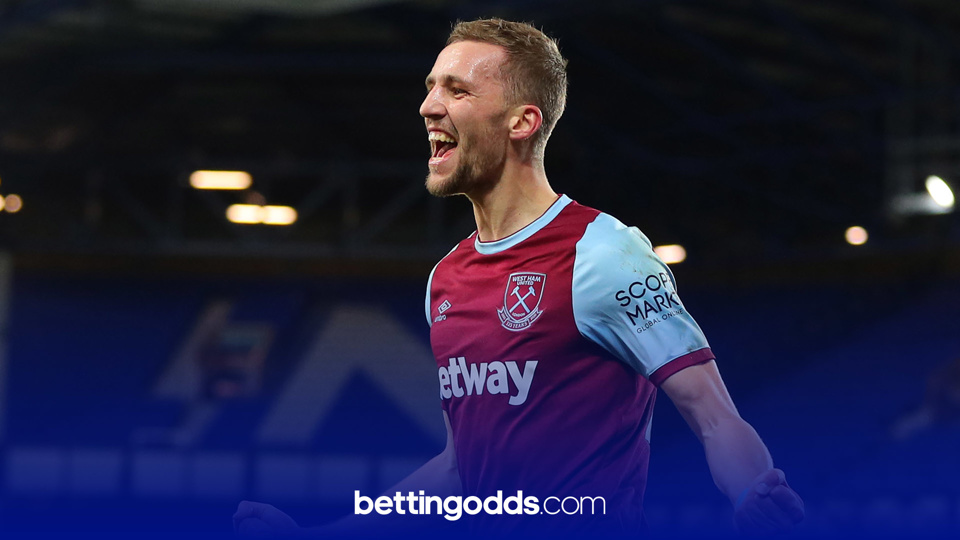 Tomas Soucek is West Ham's top scorer this season and features in our 22/1 selection for the game
By Anthony Eadson
17:11 Friday 29th January 2021 - 4 minute read

West Ham have exceeded expectations this season and have put together a run of six consecutive wins in all competitions. The Hammers take on Liverpool at the London Stadium on Sunday, with the hope of leapfrogging Jurgen Klopp’s side back into the top-four places. We’ve got three football tips for the game, which can be seen live on Sky Sports Premier League at 4:30pm.

David Moyes will be hoping to have Jesse Lingard available for selection as the Hammers are currently looking to complete a loan deal for the Manchester United midfielder. Arthur Masuaku is the only confirmed absentee for the hosts who could name an unchanged side to their game at Crystal Palace on Tuesday.

Joel Matip was forced off at half-time against Spurs for Liverpool on Thursday, so Jurgen Klopp may go with Jordan Henderson and Fabinho in central defence. Curtis Jones should slot into midfield with the ageing James Milner having played the last three games.

After taking three points when priced at 11/10 against Tottenham, Liverpool are 3/4 to make it back-to-back wins on Sunday. The draw can be backed at 3/1, with a win for David Moyes and West Ham offered at 7/2.

Kicking off this trio of selections for Super Sunday is Liverpool’s right-back Trent Alexander-Arnold to have one or more shots on target, which is currently available at 15/8 with both Betfair and Paddy Power. The England International was on the scoresheet in his side's 3-1 victory on Wednesday in London, slotting home after Hugo Lloris had parried Sadio Mane’s shot.

Over recent weeks Trent has upped his game when it comes to testing goalkeepers and has registered a shot on target in each of his last four appearances. Virgil Van Dijk and Matt Doherty were the only defenders to manage more shots on target in the league last season and with the 22-year-old also being a free-kick taker, it adds a bit more appeal to his price. Coral have this selection priced at odds-on at 17/20 this weekend which makes the 15/8 from Betfair look rather nice.

100% of Declan Rice’s shots on target have come at the London Stadium in the league this season and I’m fancying the talented young man to have a shot on target against Liverpool on Sunday. This is currently available at 4/1, again with both Betfair and Paddy Power which is currently the industry top-price.

This selection has landed in Declan Rice’s last two home matches and in total he has taken 22 shots this league campaign. Having a look back at 2019/2020, 78% of Rice’s shots on target came when playing at home in the league and with so many aerially strong players, West Ham often look to put plenty of balls into the box with Rice joining in on set pieces. With David Moyes’ sides recent form considered and Declan Rice’s tendency to hit the target in home matches I’m having a small play here on 1+ shot on target at 4/1.

At 22/1 with Paddy Power, I’ve also opted for a double on both Tomas Soucek to have a shot on target with Curtis Jones to be carded. One of the signings of the season, Tomas Soucek is loving life in London despite the pandemic. The Czech is the club’s top league scorer with seven goals and has the highest average whoscored.com rating of any West Ham player this season. A player who just seems to have a knack of popping up in the right place at the right time, Soucek can provide goals with his head and feet and at even money looks an attractive price to add to his 15 shots on target this campaign.

Paired with a Soucek shot on target, is Liverpool’s Curtis Jones to be carded. The youngster should slot into midfield as James Milner has now played the last three games and Jordan Henderson will be at centre back. Booked in three different formats this season, Jones looks marginally overpriced at 15/2 for a card, even with the notoriously card-tight John Moss in charge of the game. West Ham are a physical side and I think Jones could struggle against the midfield powerhouses of Rice and Soucek.

That’s 15/8, 4/1 and 22/1 picks in total. Best of luck to anyone following and please always gamble responsibly.