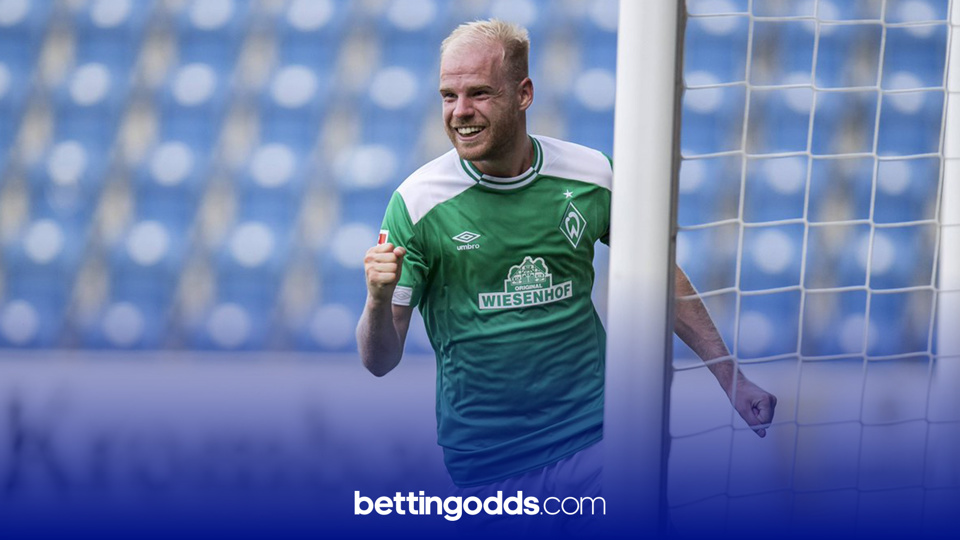 The Bundesliga rolls onto gameweek 32 with a flurry of midweek fixtures and the pick of those on Tuesday looks to be Werder Bremen v Bayern Munich. The relegation threatened hosts currently sit 17th in the league with relegation a real possibility, however Saturday’s 5-1 away romping at Paderborn showed that they still have plenty of fight left in them. Bayern on the other hand are closing in on their eighth consecutive league title, and since the restart have won all six of their fixtures scoring twenty-one goals in the process.

The bookies have priced up Die Rotten at a rather skinny looking 2/11, which is an implied probability of over 84% for the visitors to take all three points.

Both Robert Lewandowski and Thomas Muller missed out on the win against Gladbach serving suspensions and the return of the destructive duo is sure to put the frighteners on any defence.

All three of Bayern’s most recent victories have included both teams to score, and with a rather generous looking 29/20 on offer from BetVictor and a Bremen having to throw caution to the wind, a Munich win and both teams to score should be considered. The game can be viewed live on BT Sport 1 kicking off at 19:30pm.

Davy Klaassen will enter the game full of confidence after bagging a brace against Paderborn at the weekend.

Dutch midfielder Davy Klaassen has played a key role in Werder Bremen’s midfield this year and has been finding form at this crucial stage of the season. The attacking midfielder was superb last time out against Paderborn, bagging himself a brace and taking his league tally to six for the season, his highest since leaving Ajax back in 2017. Delving into the numbers we can see that Klaassen is averaging well over a shot a game (1.4) and with confidence high after Saturday’s performance, the 15/8 from Betfair makes plenty of appeal. With the former Everton midfielder also being the penalty taker for Florian Kohfeldt’s side, it adds another string to our bow enhancing the chance of a shot on target. Yes it’s clear that when playing Bayern, the opposition tend to see a lot less of the ball, but with the boys from Bremen fighting for their lives, they will be looking to shoot on sight at any chance given.

The former Everton man has two, and Bremen have three goals at the break!

Their escape is still on 👊 https://t.co/1nkbwWgTmq

15:25 PM - 13th Jun 20
10
97
We’re used to seeing football odds displayed in either fractions (2/1) or decimal (3.0), but what the Win Percentage Probability score does is show you exactly what percentage chance the bookmaker gives that selection of winning based on their odds.
Calculate your returns:
£79.00
Why this Tip?

Pavard has been superb going forward for Bayern this season and is averaging 0.9 shots a game.

Milos Veljkovic has been booked six times this season and will be up against the lightening quick, Alphonso Davies

Twenty-four year old Benjamin Pavard has enjoyed a fantastic season and has been effective at both ends of the pitch. Bayern’s wing backs always seem to be prominent and 6ft 1 inch Pavard has also been a serious threat at set pieces and in the Bundesliga has averaged 0.9 shots per game over the course of this season. Big Ben did manage to find the net in the weekend victory against Gladbach, however it was at the wrong end. We’ll be hoping that he can make amends and manage a shot on target to bring in half of our same game multi.

Werder have racked up sixty-six yellow cards and four red in this campaign and one of the usual suspects to find their way into the book is defender Milos Veljkovic. The Serbian has six yellows with only two of his teammates having accumulated more. We’ve already mentioned how common it is for Bayern to attack through their full-backs and with Velkjovic playing on the right of a back three he should be a very busy boy up against most likely, Alphonso Davies. The 19 year old missed the last game with Hernandez stepping in at left back, but is expected to return for this midweek clash. He may still be a teenager but Davies already looks to be the most talented player ever to come from a footballing nation governed by Concacaf. His lightning pace and ability to play a range of positions are valuable assets and he looks to have a huge future at the German Champions. Combine the two elements together and the same game multi from Betfair pays 11/1 which looks a generous price.

Klaassen & Eggestein have been booked 12 times between them in the league and could be dragged out of position through the wide attacking nature of Bayern.

Kingsley Coman is touching distance away from picking up his fifth Bundesliga title and is expected to return to the lineup for the trip to Bremen. It’s quite remarkable that after only celebrating his twenty-fourth birthday at the weekend, the Frenchman has already won the league twice with PSG, once with Juventus, and four times with Bayern, some start to his career! Being able to switch from one flank to another, it’s expected that Coman will come in for Gnabry on the right hand side, however it would not be a surprise to see Perisic rested and Coman be placed on the left. The stats tell us that he is averaging 1.6 shots per game, but with PaddyPower having 3/1 available about 2 or more shots for Coman, we are willing to add it into our longshot for the evening.

Our three pronged punt then sees two Bremen players to be carded and both come right from the engine room of the team. First up Davy Klaassen, the former Everton man has been booked seven times in the league this season and seems to be at the heart of everything his team does at the moment. With Bayern set to see the majority of the possession, Klaassen will have to revert to his defending duties for large spells of the game and being dragged out of position by Bayern’s attacks down the wing could be a possibility. Only Marco Friedl has seen more cards for Bremen than Klaasen this season and we fancy him to be cautioned once again at the Weser Stadium.

Klaassen’s partner in the middle of the park will be Maximilian Eggestein, and the twenty-three year old is no stranger to picking up a card. Averaging 1.1 fouls per game, Eggestein has picked up five yellows in the league this season, and with Tuesday night’s opponents being the force that is Bayern Munich, we expect Eggestein to be having a higher foul count than his average suggests. The chaps over at PaddyPower have boosted our same game multi to the enhanced price of 45/1 which we think looks very appealing. Please bet responsibly and most importantly enjoy the game and best of luck!

With some high-profile signings joining the club in the summer, partnered with a plethora of existing talent,…