Watford v Middlesbrough Tips: The Hornets will be desperate to start their season with a win
By Callum Pragnell
10:09 Friday 11th September 2020 - 5 minute read

After a rather brief period of rest, domestic football returns this weekend as the Premier League and EFL gears up for another season of madness.

The Championship is the first division to return to our screens, with recently-relegated Watford hosting Middlesbrough in the second tier's curtain-raiser at Vicarage Road. Kick-off for this clash is at 7:45pm and the game will be shown live on Sky Sports.

Looking into the match betting prices and it is the Hornets who are solid favourites to kick off their campaign with a win. Vladimir Ivic's new team are Evens (a 50% chance) to claim the three points this evening with William Hill, while Neil Warnock's visitors are priced at 3/1 to win the game with BetVictor - an implied chance of 25%. The draw is a best-price 12/5 with Betfair.

In terms of team news, Watford are ravaged with absentees heading into this one. The Hornets will be without Andre Gray after the striker picked up an injury in the recent pre-season clash against Spurs, while Ismaila Sarr and Troy Deeney are both likely to miss this game as the pair's future at the club remains unclear.

Midfielder Will Hughes is still a fortnight away from being available for new manager Vladimir Ivic, while Etienne Capoue, Roberto Pereyra, Danny Welbeck and Adam Masina will all miss out. Long term absentees Daryl Janmaat and Isaac Success are also ruled out.

This could mean a debut for Glenn Murray up front, after the veteran front man joined Watford on a season-long loan from Brighton last month. Francisco Sierralta, who came off the substitutes' bench in the 2-1 friendly win over Spurs on Saturday, may also make his debut after signing from Udinese last Wednesday.

Middlesbrough on the other hand have no injury problems and will line-up with what Neil Warnock deems to be his strongest eleven in Hertfordshire. My three football tips for the match can be found listed below, but please remember to always gamble responsibly.

Despite Watford's injury woes I can see the Hornets kicking off their campaign with three points on home soil. Under new management and determined to return straight back to the top-flight following their relegation last season, the Hertfordshire club need to hit the ground running or risk falling behind early doors - something which can easily lead to catastrophic repercussions in the Championship.

While some of the hosts' key players will be absent for this clash, they still have a squad packed full of quality, with the likes of Domingos Quina, Tom Cleverley and Nathaniel Chalobah all possessing the ability to harm Middlesbrough.

I am expecting Neil Warnock's side to find a breakthrough, but think Watford will be too strong over the course of 90 minutes, therefore a home win alongside over 1.5 match goals is my play here.

Watford v Middlesbrough Tip #2
Domingos Quina to score anytime
4/1
Has looked sharp in pre-season and scored in the win over Spurs at the weekend
Odds correct as of 2020-09-10 11:50 Odds subject to change.

My second bet for tonight's game is Domingos Quina to score anytime, boosted to 4/1 from 3/1 by the good people over at Betfair.

The 20-year-old saw opportunities limited last season in the Premier League, but with so many players departing Vicarage Road this summer it's likely that he'll see an increase in minutes this term.

Quina opened the scoring with a long range strike in the Hornets' recent pre-season win over Spurs last weekend, so will carry plenty of confidence and momentum into this tie.

At such appealing odds, I'll be having a little wager on the Portugal U21 international to find the net in 90 minutes. 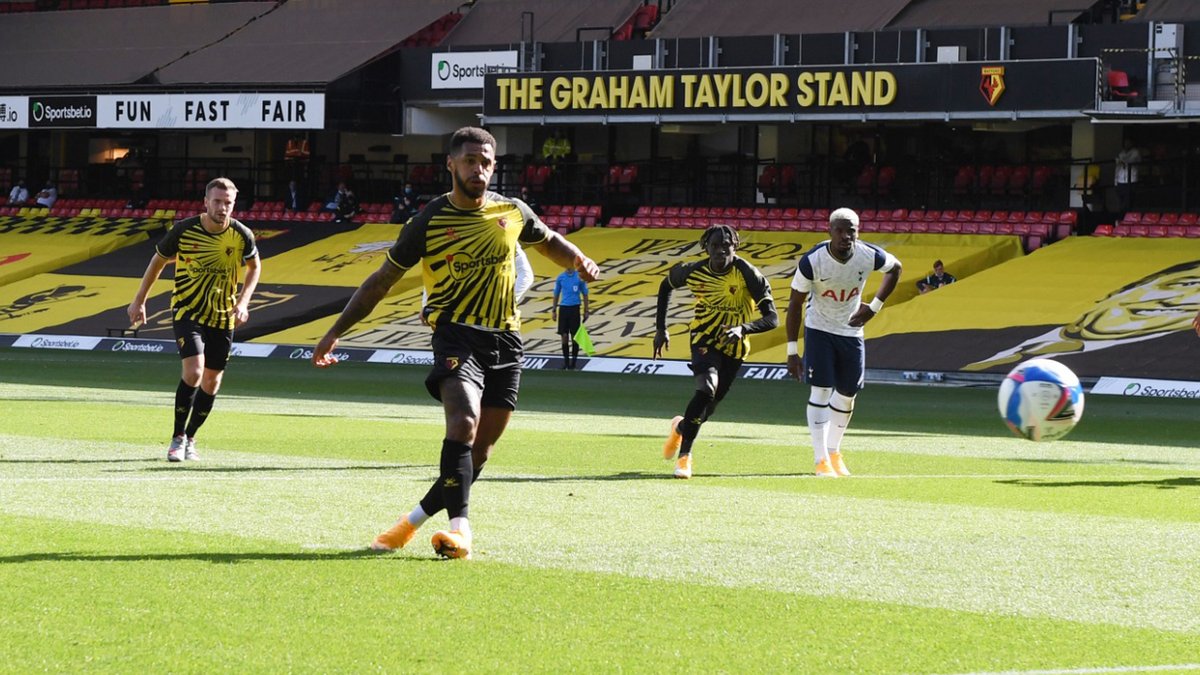 Two goals up at the break thanks to Quina & Gray.

As with any opening day fixture, tempers can often flare and passion can boil over as every player is desperate to get their season off with a win. With two physical sides up against each other in front of the Sky cameras I can see plenty of feisty challenges here, and if that does prove to be the case then Watford midfielder Tom Cleverley - who was recently made club captain ahead of the new season - should be right in the middle of things.

What is most appealing to me is the 31-year-old's price. 3/1 seems huge for a central midfielder prone to a strong challenge, and it is one that I simply cannot pass up.

Doubling this longshot selection up, in turn making it a juicy 20/1 (boosted from 16/1 by Paddy Power), I'm also backing Middlesbrough front man Britt Assombalonga to find the net in 90 mins.

The 27-year-old notched 11 league goals in 2019-20, ending the campaign as Boro's joint-top goalscorer. He is priced up at a huge 33/1 in the Championship top scorer betting market this season, which does seem a little high to me considering how well he ended last term - netting five goals after the restart.

As mentioned earlier, I do envisage both teams finding the net in this one and Boro's biggest chance of scoring comes in the shape of Assombalonga. Including the Congolese forward into this bet boots the price for us nicely, so all in all I'm happy with this selection to round off my trio of bets.