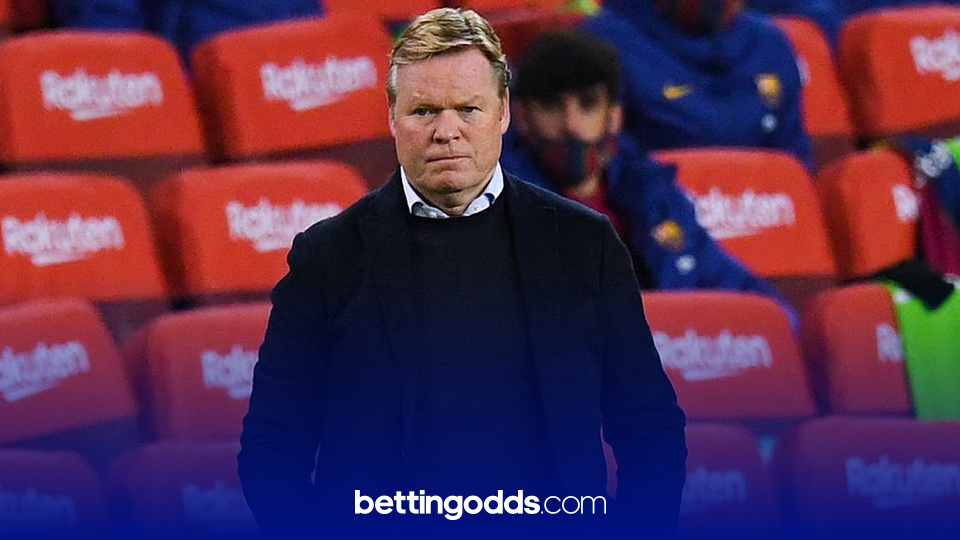 The stand out fixture in Spain this weekend takes place on Spain’s southern eastern coast on Sunday afternoon as Valencia welcomes.

Barca are currently two points of the pace sitting in third making victory here absolutely essential if they are going to stand any chance of winning the league. Unsurprisingly, the bookmakers fancy them to secure three points, pricing them around 1/3 here implying they have a 75% of victory which is perfectly apt given the fact that Ronald Koeman’s side have won 74% of their games when priced as such.

Ousmane Dembele is fully fit and available for the hosts, however, it is unlikely that he will start at Antoine Griezmann expense, meaning the latter should continue up front alongside Lionel Messi. Elsewhere, Sergino Dest should be favoured over Sergi Roberto at right wing-back. As for the hosts, Thierry Correia is a doubt with a knee injury, if he misses out here Daniel Wass will drop back to RB.

Uros Racic has featured for a total of 1885 minutes in La Liga this campaign. During which time he has accumulated five bookings. He is one of Los Che’s more notoriously foul merchants as he averages more of those (1.4) then he does complete tackles (1.2), he will have his work cut out policing one of the greatest players on the planet. Lionel Messi is the league’s second most fouled player, drawing an average of 2.7 per game. In his penultimate start, he drew such an horrendous tackle from Villarreal’s Trigueros that it warranted a red red card!

In terms of price, Betfair’s 16/5 is the best available as the same bet is as short as 23/10 elsewhere. It also does not hurt that Sunday’s referee is José María Sánchez Martínez, the Spanish whistleblower has brandished an average of 5.8 cards per game in La Liga this season, awarding eight in his most recent appearance!

Frenkie De Jong looks set for a start in central midfield alongside Sergio Busquets and Pedri. When he features in this slightly more offensive role he gets more attacking freedom which in turn leads to an increase in his offensive output.

In his last seven starts in a midfield three, De Jong has had five shots, completed 17 key passes- a pass that leads to a shot- and registered an assist. The Dutch international has four assists to his name already this campaign but is more than capable of adding to that tally in this slightly more advanced role. In fact, I touted the Dutchman for an assist in Barca's game vs Villarreal during which he completed three key passes and generated an xA of 0.55! In the game since, vs Granada, he completed a staggering six key passes yet somehow none of which mustered a goal.

As previously mentioned, De Jong gets more attacking freedom in a midfield three which makes his price for a shot on target also take appeal. Using Betfair’s ‘Same Game Multi’ feature you can combine him to have one with cards for Guillamon and Racic at odds of 46/1. Despite only starting 16 games this season, Hugo Guillamon has racked up seven bookings, making him his side's most carded player as he averages one every 225 minutes played!