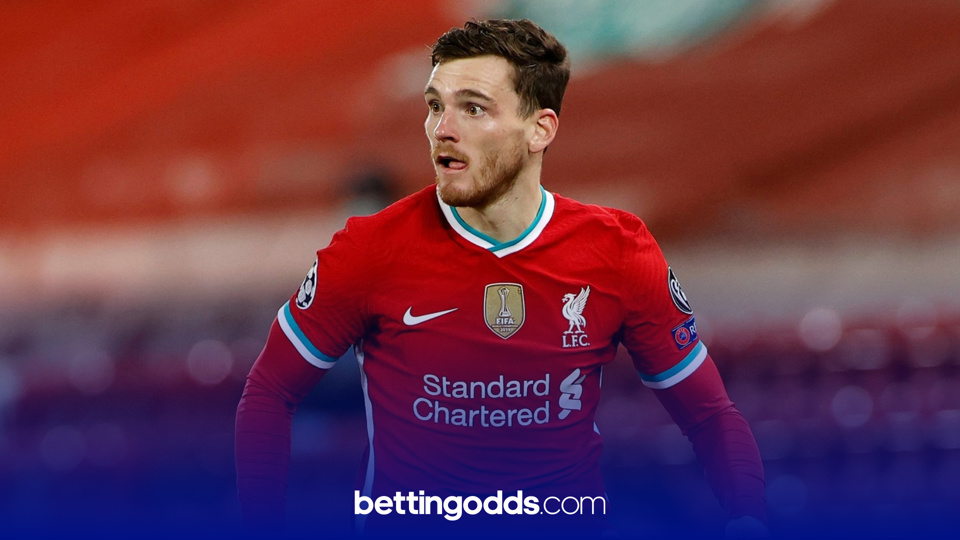 Andy Robertson has taken three shots in his last three games and features in our 5/1 selection for the game
By Anthony Eadson
16:56 Wednesday 27th January 2021 - 4 minute read

When Tottenham played Liverpool on December 16th, the two sides were level on points in first and second place in the Premier League, before Roberto Firmino’s late goal gave the Reds the win to put them three points clear.

Since then both clubs have endured a turbulent festive period and have seen themselves slip down the table. Having a look at the prices from the bookmakers for Thursday evening’s clash and Liverpool look particularly short at just 11/10 to collect the three points. The draw can be backed at 11/4 with a win for Jose Mourinho and Spurs priced at 5/2.

Jordan Henderson is a slight doubt for Liverpool which could see Alex Oxlade-Chamberlain slot into midfield. Joe Rodon could keep his place for Spurs after a strong showing last time out. We’ve got three football tips for the game that kicks off at 8pm and can be seen live on BT Sport

Liverpool will be cautious about losing this game after a run of poor results. I can see them having a much more measured approach and being particularly wary of leaving themselves overexposed to a potential counter attack from Spurs.

Jose Mourinho has proved time and time again how he likes to sit deep and apply the low block with a look to hit his opponents on the counter when he takes on ‘big-six’ sides and I don’t see that changing on Thursday.

Liverpool have failed to score in four Premier League matches, with under 2.5 goals landing in all of their last five. Their star players look to be suffering from fatigue and we must remember that they have been performing at exceptionally high levels for the past 18 months.  This blip in form has come at the worst possible time for Klopp and with the injuries he has had to deal with and players having to switch positions it’s not all that surprising to see a decline. At the odds-against price of 23/20, I’m happy to be involved with under 2.5 goals in this match.

Andrew Robertson loves to get forward for Jurgen Klopp’s side and the left-back has five assists and a goal to his name this term. With Spurs sitting so deep I expect Liverpool to try and get around this by playing their wing-backs particularly high, a tactic often used by Klopp.

I’m expecting Robertson to pop up in the final third on several occasions in the game and he has taken three shots in his last three matches, including hitting the target against Burnley. With Spurs looking to frustrate the Champions it would be no surprise to see some shots from range or for Robertson to drift into the area and pose a potential goal threat. At 5/1 I feel we are getting a reasonable price in a game that should see the Scot spend most of his time in the opposition half.

At 50/1 I feel we are getting a rather generous price on Mo Salah to have two shots on target, with both Pierre-Emile Hojbjerg and Thiago to be carded. This is available with Paddy Power, and it’s worth noting that Salah had four shots on target in the reverse fixture in December. The top scorer in the league with 13 goals I’m happy to include him here for 2+ shots on target.

Pierre-Emile Hojbjerg is enjoying life under Jose Mourinho at Spurs. A real warrior in the centre of the park, Hojbjerg has been booked on four occasions already in the league this campaign and will be relishing the thought of putting in the dirty work against high level opposition in Liverpool. With seven yellows for club and country in all formats this season it would be no surprise to see Hojbjerg pick up his fifth of the season with a lot of defensive work on the agenda on Thursday after also picking up one in the reverse fixture.

Thiago Alcantara was booked seven times in 24 appearances in his final season in the Bundesliga for Bayern Munich. A player often tasked with breaking up play or stopping a potential counter, he was booked in his last start away from home in the league for Liverpool  and he looks one of the more likely suspects for a booking in what could be a fiery game.

Jurgen Klopp insists he is not in a bad mood but will be desperate to turn the tide on Thursday in the capital. That’s 23/20, 5/1 and 50/1 shouts for the game, as always please remember to gamble responsibly.