The SPL Returns: Celtic aiming for 10th straight title, but Gerrard's Rangers can spoil the party

The Scottish top-flight starts again this weekend following a five-month lay-off, with SPFL boss Neil Doncaster cutting short the 2019-20 campaign due to the coronavirus pandemic, instead settling it by points-per-game.

This decision saw Celtic crowned champions for the ninth consecutive season, while Hearts were relegated to the Championship despite only 30 games being played - a decision the Edinburgh outfit took all the way to the SFA only for it to be upheld by the powers that be.

Rangers looked promising throughout the early part of the season but fell away after the turn of the year. Despite Steven Gerrard’s side beating Celtic 2-1 in December and running the Hoops to the wire throughout the most-part of the campaign, a lack of consistency ultimately cost the Gers and they ended up finishing 13 points behind their Glasgow rivals in second place, having played one game less.

Celtic will be looking to make history by winning their 10th straight league title this time around, a feat that is yet to be achieved by any Scottish club. Neil Lennon’s side have blown the division away in recent years, winning the treble in each of the last three seasons so it is no surprise to see them priced as odds-on favourites to win it again, priced at 2/5 with Betfair.

The Bhoys welcome Hamilton to Parkhead in their league opener, before trips to Kilmarnock, St Mirren and recently-promoted Dundee Utd, and home games against Aberdeen and Motherwell before the end of August.

Rangers will be doing their best to spoil the party here as the last thing they want to witness is the club they loathe most make history with their indisputable success. Gerrard has strengthened his side by signing 21-year-old attacking-midfielder Ianis Hagi from Belgian outfit Genk for £3m, and in him they have a player with real potential and quality, which could make a huge difference in their title quest this season.

Rangers are 15/8 second-favourites to win their first SPL title since 2010-11 with BetVictor, and in what will most probably prove to be another two-horse race, many will fancy the bigger priced pick to go the distance.

The Gers kick-off their league campaign with a trip to Pittodrie, where they’ll face Aberdeen in the SPL’s curtain-raiser live on Sky Sports at 12:30, before they travel to Germany to take on Bayer Leverkusen for the first leg of their rearranged Europa League last-16 tie - a competition they are priced at a huge 500/1 to win in the Europa League betting.

Aberdeen are favourites to clinch the title in the market WITHOUT Celtic and Rangers (6/4 with Betfred), while Hibs can be found at 7/2 with William Hill and Motherwell are 13/2 shots (Betfair). 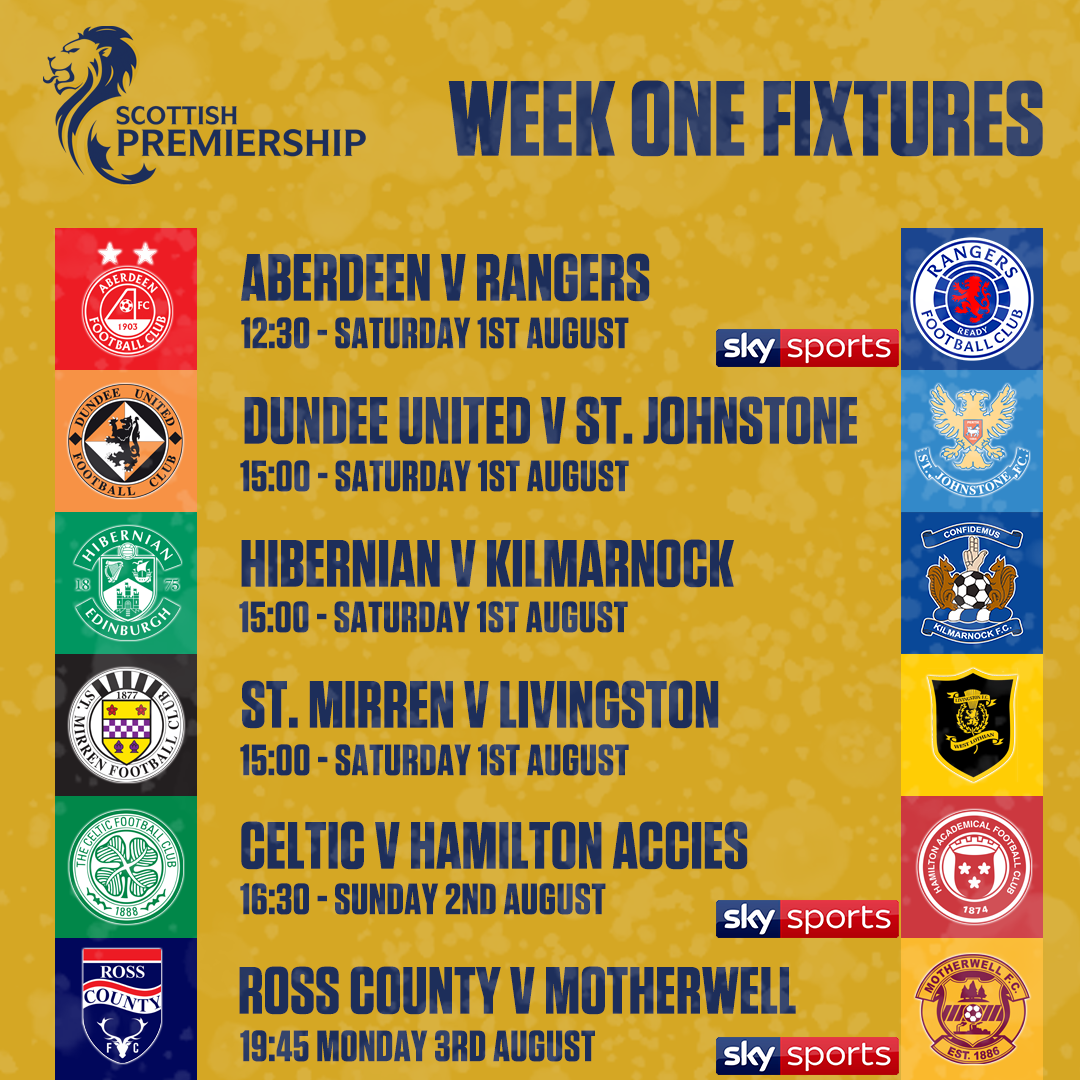 🏆⚽️ The long wait is almost over... Here are your #SPFL fixtures for this weekend!

🙋‍♂️🙋‍♀️🙋 Who else is buzzing about the return of Scottish football?

Drop your predictions in the comments 👇 https://t.co/kshqhNmgZr

Hamilton are favourites to finish bottom of the SPL this season, priced up at 2/1 with William Hill. The Accies were one of the few winners from the 2019-20 season being curtailed early as they found themselves just four points ahead of Hearts in 11th and could have easily traded places with the Jambos had the campaign been played to a conclusion.

St Mirren are second-favourites for a rock-bottom finish, priced at 10/3 with Betfred and, like Hamilton, are another side who could’ve easily gone down in normal circumstances. Jim Goodwin’s side finished the campaign in 9th but were only six points ahead of Hearts, so it will be interesting to see if they improve this time out and steer themselves clear of a bottom-half finish.

Gunning for the Golden Boot

Celtic’s Odsonne Edouard stormed to the summit of the SPL’s top goalscorer chart last season, netting 22 goals, but the fact that the season was abandoned meant that the French striker missed out on the trophy in extremely unfair circumstances.

It is clear to see that the 22-year-old is a cut above the rest in Scotland’s first tier and if he continues to play the way he has been then his days at Celtic Park will surely be numbered, but for now he is staying put and will be more ravenous than ever to complete the job he started last season.

Edouard is solid 9/4-favourite to win the Golden Boot in 2020-21, while veteran marksman Jermain Defoe - who finished with an impressive 13-goal haul from just 11 league starts last term - can be found at odds of 6/1 (BetVictor) to outscore his counterparts in what looks to be his final season before retirement.

Hibernian’s Christian Doidge is an outside shot at 12/1 with Boylesports, while Celtic duo Patryk Klimala and Leigh Griffiths can both be found at odds of 16/1 to finish as the league’s leading goal-getter with Betfair.