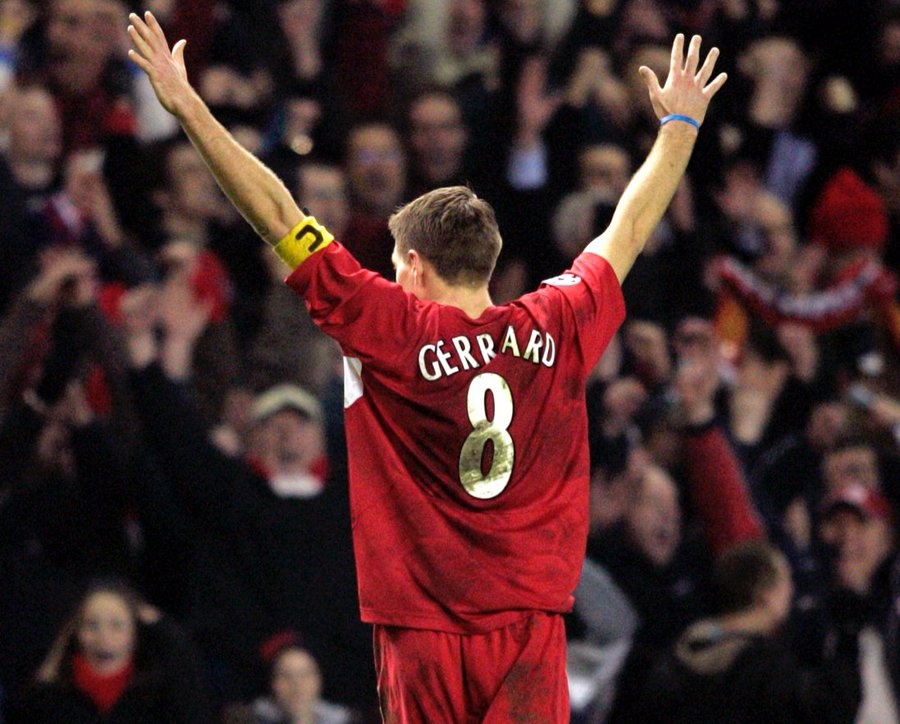 The Reds legend played a huge part in his club's success over the years
By Callum Pragnell
05:52 Saturday 30th May 2020 - 5 minute read

Steven Gerrard is widely known as one of - if not the - best central midfielder of all-time, depending on who you ask. Throughout his illustrious career at the very top, the former England international won the Champions League and FA Cup with Liverpool amongst other achievements.

His legacy in Merseyside and across the world as a whole will be forever remembered in football history, and rightly so.

BettingOdds.com takes a trip down memory lane here, and looks back at the five times Gerrard's actions defied the odds for Liverpool, starting with a memorable European night at Anfield.

Before they won the 2004-05 Champions League, Liverpool came close to being dumped out of the competition in the group stages, but a dramatic comeback against Olympiacos saved their bacon.

The Reds had to beat the Greek titans in their final group match at Anfield to make it through to the knockout stages, but fell behind in the first-half through a goal from Brazil legend Rivaldo, meaning that three unanswered goals would be required from the hosts to earn qualification.

Substitutes Florent Sinama Pongolle and Neil Mellor both found the net to edge Liverpool in front after the break, but it still wouldn't be enough. Then, with just four minutes remaining, Gerrard stepped up to lash a stunning long-range effort home to book the Reds a spot in the last-16.

Liverpool entered the game as solid 1/2 favourites, with Olympiacos given just a 16% chance of winning by the bookmakers before kick-off.

Indeed, if it were not for the talismanic Gerrard, the Reds would have yet again been left with egg on their face. 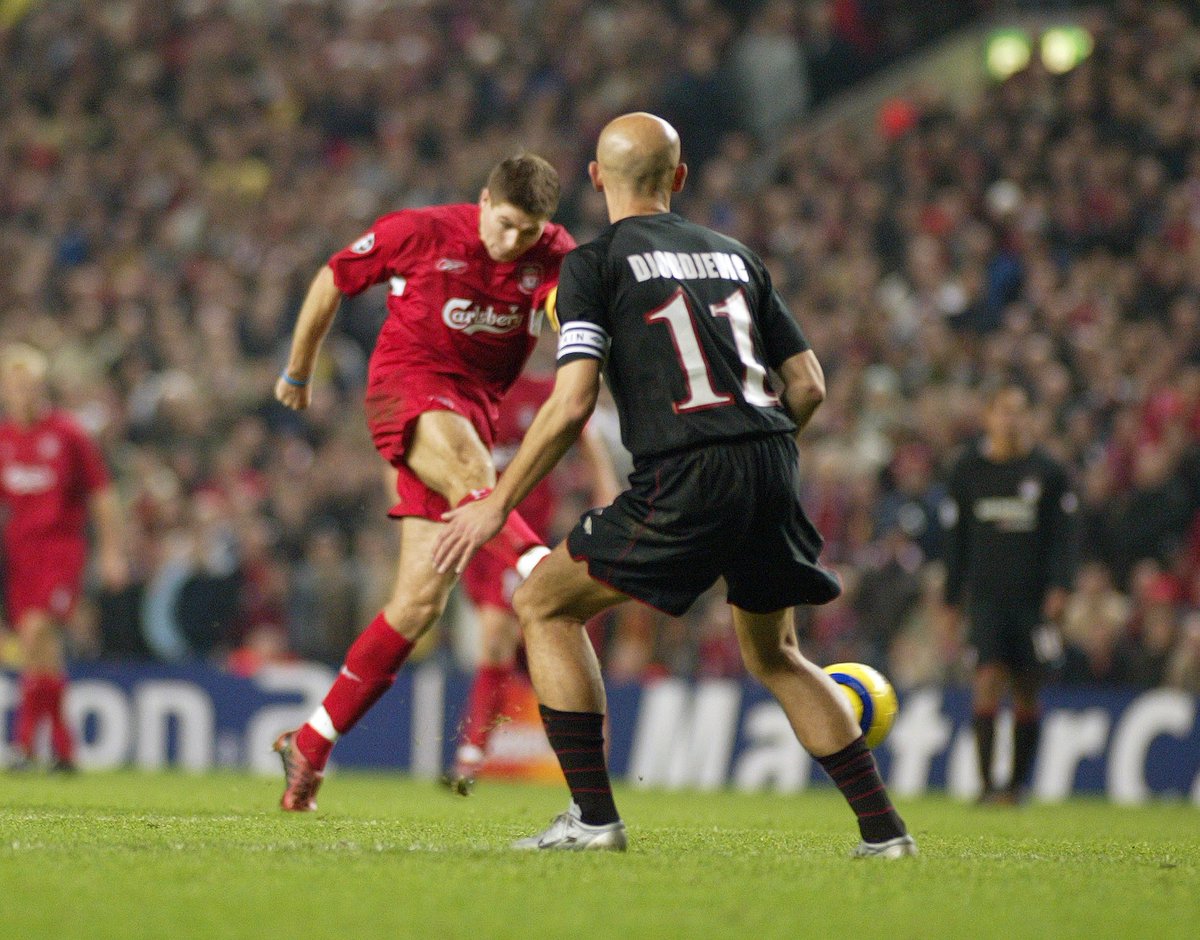 On this day in 2004, Steven Gerrard scored *that* goal vs. @olympiacos_org in the Champions League. https://t.co/ItyQb3ipNf

Arguably the greatest Champions League final in history (unless you are an AC Milan supporter) came back in 2004-05, with Gerrard inspiring Liverpool to a miraculous comeback against the Italian giants.

However, a second-half resurrection from the Englishmen - which saw Gerrard score and win a penalty for the equaliser - saw the match end 3-3 and Liverpool went on to win on penalties, with their influential skipper at the forefront of a memorable comeback. 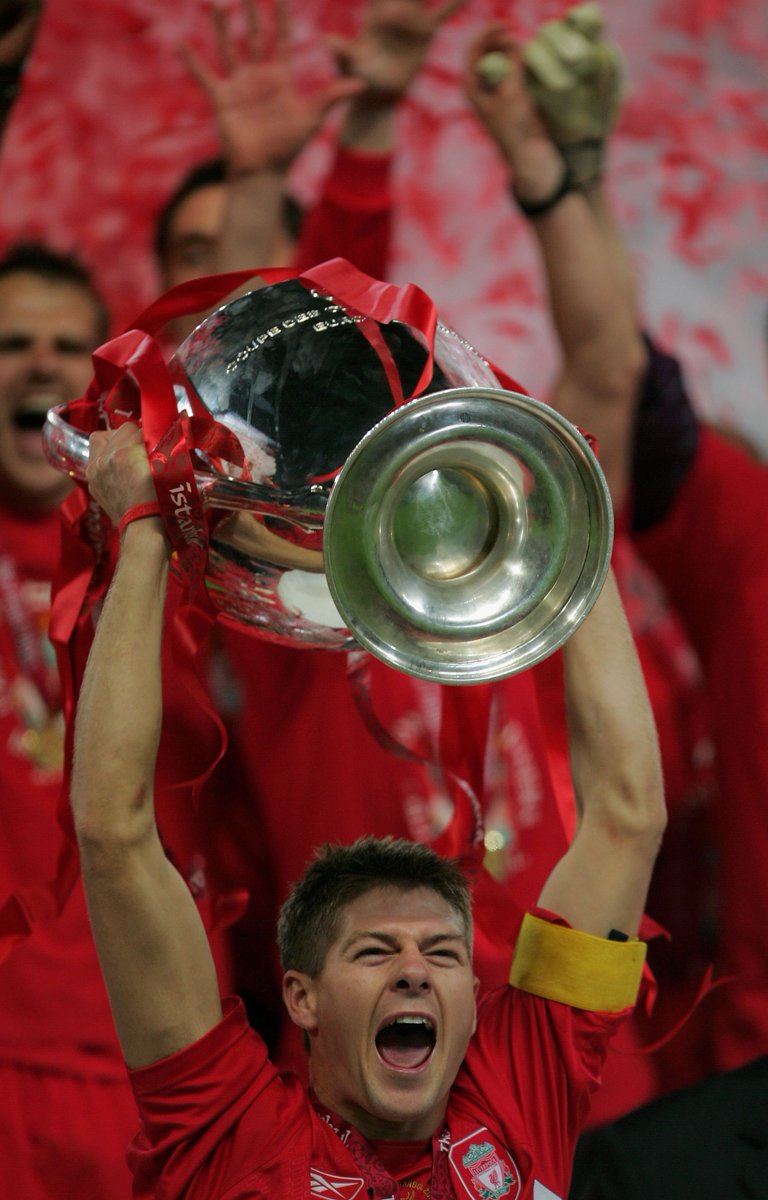 Just one year on from his exploits in Istanbul, Gerrard engraved his name into the history books of another prestigious competition - this time the FA Cup.

Trailing West Ham by two goals, the Reds skipper scored an equaliser after Djibril Cisse had previously halved the deficit for Liverpool before half-time.

Then, Gerrard's sensational long-range effort in added time forced the game to extra-time and subsequently penalties. The Englishman scored again in the shootout and Liverpool claimed their first FA Cup since 2001.

Going into the game Liverpool were the 1/2 odds-on favourites, given a 66.7% chance of victory by the bookies. Gerrard saved the Reds once again with his 91st-minute strike, which goes down as one of the best goals ever scored in the history of the competition.

On 14th March 2009, Liverpool travelled to Manchester United, trailing Sir Alex Ferguson's side by seven points but hopeful of ending their own long wait for the title.

The visitors entered the clash as underdogs, priced at 7/2, with many believing that the experience and dominance of a United side in their prime would be enough to clinch the three points on home soil.

It turned out to be a completely different affair all together, though, as Gerrard inspired Liverpool to an emphatic comeback at Old Trafford, scoring in a 4-1 victory after the visitors initially slipped a goal behind via a Ronaldo spot-kick.

To rub salt in United's wounds, he then kissed the camera in celebration - one of the most iconic goal celebrations in Premier League history. 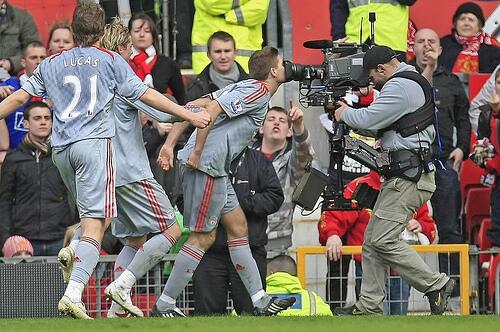 2009: Gerrard scores as Liverpool thrash Real Madrid, and kisses the camera in a 4-1 rout at Old Trafford. http://t.co/nF9Stis5sB

You didn't think this was an article solely praising Steven Gerrard, did you? While the Liverpool legend has been instrumental in his former club's success over the years, and rescued them on more than one occasion, he is also one of the main reasons why the Reds failed to win the Premier League title back in 2013-14.

We all have bad days and make mistakes, but unfortunately for Gerrard this one was played out in front of millions and had disastrous repercussions.

With the league title within reaching distance thanks to a stunning 3-2 win over Manchester City in mid-April 2014, Liverpool supporters were starting to believe that it was finally their year.

The Reds moved into odds-on favourites to land their first ever Premier League trophy, until tragedy struck at Anfield.

We all know what happened next: Gerrard slips, Demba Ba goes through on goal and neatly finishes and Chelsea end up winning 2-0.

Still, you take the rough with the smooth, I suppose.