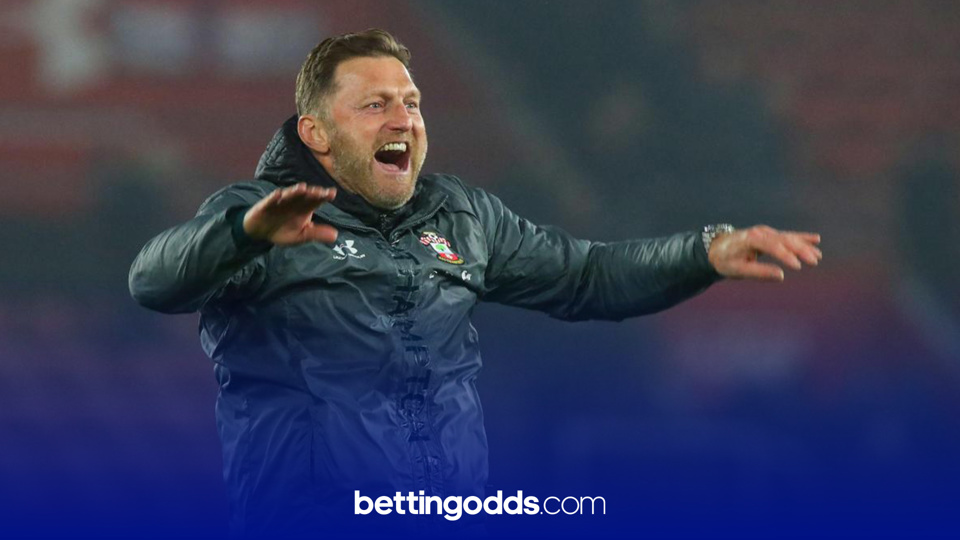 Under 2.5 goals has landed in Southampton's last six league games and we fancy a low scoring affair as part of our football tips on Tuesday evening
By Anthony Eadson
17:32 Monday 25th January 2021 - 4 minute read

Southampton host Arsenal at St Mary's for the second time in four days on Tuesday evening. Ralph Hassenhuttl’s side came out the 1-0 winners in the FA Cup fourth round tie on Saturday and will be looking for a repeat in this Premier League clash.

We’ve got three football tips from our man @AnthonyEadson for the game which see’s Mikel Arteta’s side instilled as the 5/4 favourites with the bookmakers to take the three points. That does look a little short on first glance with the draw being available at 23/10, the same price also as a Southampton win.

There’s plenty of injury concerns for the hosts who will be without Jannik Vestergaard, Nathan Redmond, Moussa Djenepo, William Smallbone and Michael Obafemi. Oriol Romeu is nearing a return to fitness but could have to settle for a place on the bench.

Pierre-Emerick Aubameyang had to attend a personal matter over the weekend and for that reason is a slight doubt to start against the Saints. Dani Ceballos will be assessed before the game while Pablo Mari remains on the treatment table.

The first selection I’ve picked out can be backed via the Bet Builder function with bet365 and I’ve opted for under four goals in the game, with also under four cards shown in the game. Southampton’s last six Premier League fixtures have all seen under 2.5 goals land with under 3.5 landing in their last seven. The hosts have kept a clean sheet in six of their last eight league games and have seen under 2.5 goals land in their last three meetings with the Gunners in all competitions.

Kevin Friend is the official who will be taking charge of Tuesday evening’s game. The referee from Leicestershire is one of the tightest around when it comes to brandishing cards and has only given out more than two bookings once in his last nine games. Friend is currently ranking 18th of 19 officials this season for yellows shown per game with a measly average of 2.17pg.

All things considered here I do feel we are getting a really nice price from bet365 with just over 6/5 on there to be under four goals in the game and also under four cards shown.

Followers of my predictions and ramblings for BettingOdds.com will be aware what a big fan of Bukayo Saka I am and how I’ve been following the youngster in the shots on target market this term. At 16/5 with both Betfair and Paddy Power, I’m fancying the 19-year-old to land two or more shots on target in the game at St Mary’s.

No player at Arsenal is averaging more shots per game than Bukayo Saka this season with 2.3 on average. The left-footed attacker has four league goals to his name this term and has landed two shots on target for the Gunners in each of his last three Premier League starts and with this in mind the 16/5 on show doesn’t look the worst of prices.

At 33/1 with Paddy Power, I’ll also be having a small play on Bukayo Saka and James Ward-Prowse to have a shot on target with Alexandre Lacazette to be carded. As mentioned above, Bukayo Saka has landed two shots on target in his last three starts and if we look back further he has registered at least one on target in seven of his last eight.

James Ward-Prowse attempted three shots in Saturday’s game between these two sides and in total this season the free-kick specialist has four league goals to his name. A serious threat from distance, I’m including JWP to have a shot on target in this Bet Builder which is currently top price with Paddy Power at 7/5.

Alexandre Lacazette also makes it into this 33/1 longshot and I’m fancying the Frenchman to pick up a card. In just 30 appearances in the league last season, Lacazette was booked an impressive eight times. Five of those came away from home and with three to his name already this season, I fancy another clumsy foul or a  bit of petulance from Lacazette to land the spoils.

James Ward-Prowse is the best free-kick taker in the league.