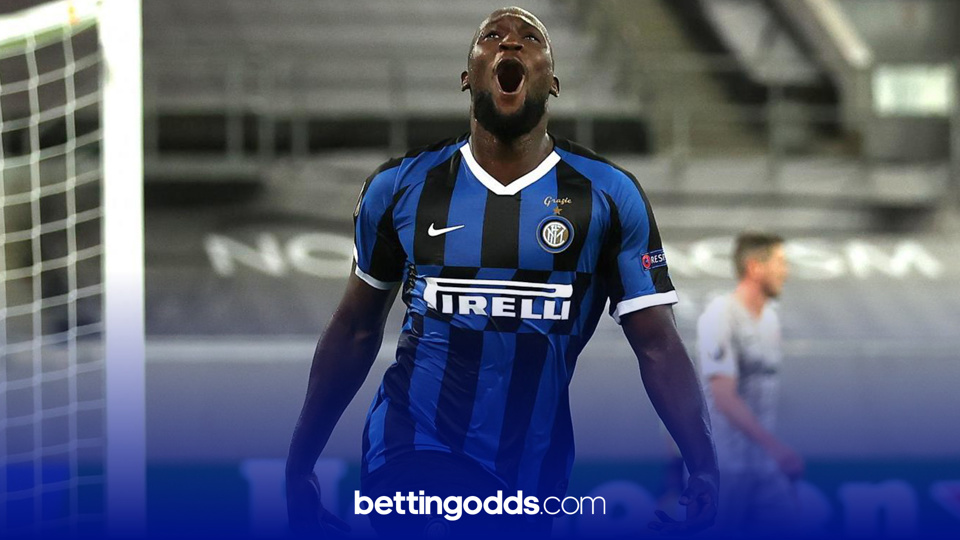 Romelu Lukaku has scored on all 10 of his last Europa League appearances
By Anthony Eadson
16:39 Thursday 20th August 2020 - 4 minute read

Friday night sees the first European final of the season with the tournament's most successful club Sevilla taking on three times winners Inter Milan in the Europa League finale in Germany.

Both teams head into the game in cracking form with Antonio Conte’s side having won their last six fixtures, only conceding one goal in the process. Sevilla have knocked out Manchester United, Wolves and Roma in the Europa League this season and you have to go back to the February 9th for their last defeat, an incredible run of 20 games unbeaten.

After putting five past Shakhtar in their semi-final Inter have been made the 4/7 favourites to lift the trophy. Sevilla should not be underestimated though and have serious pedigree in this competition and are available to be backed at 11/8 with bet365.

Argentine forward Lucas Ocampos hobbled off against Manchester United in the semi-final but is expected to start Friday’s game. Alexis Sanchez could feature from the bench but is not 100% fit and won’t start. Ever Banega will play his final match for Sevilla against his former employers.

I’ve had a look through the betting markets for the game and have picked out three football tips I like the look of.

Sevilla v Inter Milan Tip #1
Romelu Lukaku to score anytime
17/10
Lukaku has scored 33 goals in all competitions this season He has scored in 10 consecutive Europa League appearances
Odds correct as of 2020-08-20 17:00 Odds subject to change.

For my first selection I’m backing the in-form Romelu Lukaku to score anytime, priced at 17/10 (2.7) on the Betfair Exchange. Stretching back to his days at Manchester United, Big Rom has now scored in 10 consecutive Europa League games, a new record.

He’s managed to find the back of the net 33 times in all competitions and he looks to be fitter than ever, with all aspects of his game - from sprinting to finishing - looking to have improved under the guidance of Antonio Conte. He managed two goals against Shakhtar at the start of the week and I think 17/10 looks a very reasonable price here, especially when you consider that this same selection is 11/10 with bet365.

Sevilla v Inter Milan Tip #2
Inter Milan 2-1 Correct Score
9/1
Inter have scored at least two goals in their last six games, including against Atalanta, Napoli and Leverkusen Their strikers could be the difference with Lukaku and Martinez in great form Sevilla have scored in 10 of their last 11
Odds correct as of 2020-08-20 16:55 Odds subject to change.

I’ve been very impressed with both of these two sides in the second half of this season but I fancy the Italians just to edge this one and I’m backing the correct score of 2-1 Inter at 9/1.

Conte’s side finished just one point behind Juventus in Serie A this season and have scored two or more goals in all of their last six fixtures. That includes scoring two against Atalanta, Napoli and Leverkusen in that run, showing they are against respected sides with quality.

I think the front two for Milan could be the difference here but Sevilla need to be respected.

They have scored in 10 of their last 11 games and I think an early goal to Inter will open up the game and lead Sevilla into throwing the kitchen sink at their opponents in the second half. 9/1 is the best price offered at the moment with most firms having this one at 15/2.

Sevilla v Inter Milan Tip #3
Martinez & Suso to have 1+ shots on target, Barella and Fernando to be carded
35/1
Martinez scored two goals and registered four shots on target in the semi-final Suso 1+ shot on target has landed in his last two games Barella has had the most cards for Inter this season with 14 Fernando was booked 13 times in just 30 starts in La Liga this season
Odds correct as of 2020-08-20 16:45 Odds subject to change.

Finally I’ve picked out something for the optimists out there and at 35/1 I’m going for Martinez and Suso to have one or more shots on target with both Nicolo Barella and Fernando to be carded with Paddy Power.

Lautaro Martinez picked up a perfect rating of 10/10 from WhoScored.com for his performance in the semi-final, where he was on the scoresheet twice and registered a total of four shots on target.

Suso looks a fair price at 5/6 to have one or more shots on target in 90 minutes, when you consider he should be part of a front-three. He scored against Manchester United and has managed shots on target in each of his last two games.

Moving onto the cards and for Inter I’m backing Nicolo Barella to find his way into the referee’s notebook. He’s been booked 14 times in all competitions this season and I’m surprised to see some of his teammates at a much shorter price in this market considering he’s had the most of anyone in the squad this campaign.

Rounding off this Same Game Multi is ex-Manchester City man Fernando to pick up a card. He picked up 13 yellow cards in just 30 starts in La Liga this season and is one who likes to break up play. Putting those four elements together pays 35/1 with Paddy Power, good luck to those who are following, and please make sure to gamble responsibly